A pair of Calgary natural gas firms are adding an environmental sideline in carbon disposal, a specialty forecast to grow as more countries advance their energy transition plans. 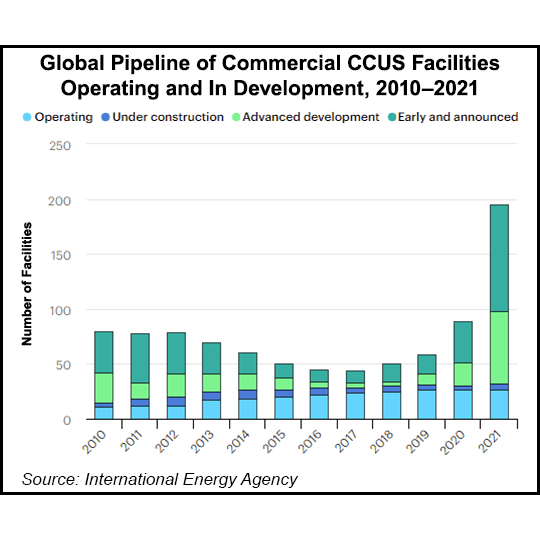 Inter Pipeline Ltd. and Rockpoint Gas Storage Ltd. are planning a carbon capture storage and utilization (CCUS) hub capable of handling more than 6 million tons/year of emissions. The hub would be in the Alberta Industrial Heartland District near the provincial capital in Edmonton.

Rockpoint has storage and trading hubs for more than 300 Bcf of natural gas in Alberta, California and Oklahoma, and a membership share in a Texas site.

Inter Pipeline has an extensive delivery and processing network, as well as a petrochemical project under construction near Edmonton.

Can CCUS Projects Reach Their Potential?

The announcement coincides with the most recent global outlook report by BP plc, which is forecasting “a central role” in all industry scenarios for CCUS.

BP economists have also predicted that “a significant scaling up in financing would be required” for CCUS to reach its potential for cleaning up greenhouse gas emissions from the production and use of fossil fuels.

The infrastructure plan by Inter Pipeline and Rockpoint is the sixth disclosed bid for CCUS rights to pore space, a sponge-like feature of sedimentary rock in Alberta controlled by the provincial government.

Calgary-based producer Canadian Natural Resources Ltd. (CNRL) has also echoed the consensus that more investment is needed to get CCUS projects off the ground. In 2021, CNRL produced 707,417 b/d of oil from Alberta’s oilsands.

“Collaboration between industry and government will be critical,” CNLR reported earlier this month.

Greenhouse gas emissions by oilsands production are estimated at about 70 million tons/year. The annual total for Alberta’s top fossil fuel production and processing industry in Canada is 137.1 million tons, according to Canada Energy Regulator.

The Alberta government has promised to announce at least one winning pore space bid by the end of this month. It posted a request for a second round of proposals with a decision target for this fall.

No bidders have disclosed detailed plans, costs or government aid requests. The Alberta and federal governments to date have funded the first wave of CCUS projects with C$1.2 billion ($960 million) in grants. Federal tax incentives are also planned, but Alberta’s full set of policies is still under discussion.