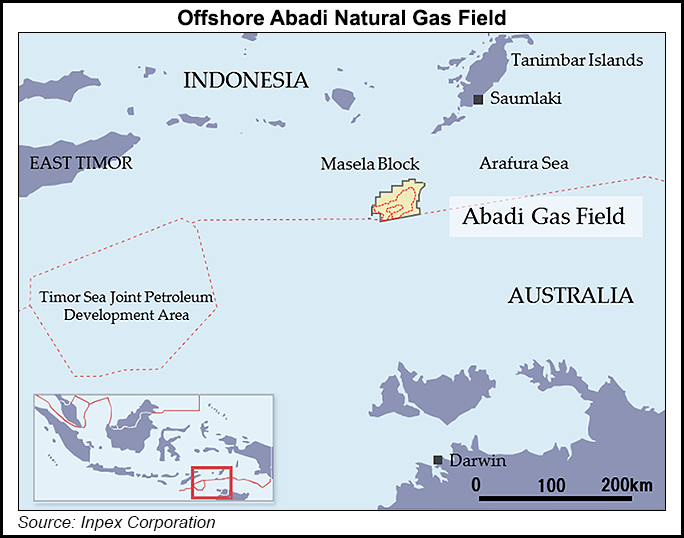 Inpex, project operator with a 65% stake, and Shell, which has a 35% stake, plan to develop Abadi via an offshore production facility and a 9.5 million metric tons/year (mmty) onshore liquefied natural gas (LNG) plant, at an estimated cost of $20 billion. The field would also supply 150 MMcf/d to local industry.

In July, Inpex and the Indonesian government signed a heads of agreement to build the project in the Masela Block of the Arafura Sea, which is estimated to hold 10.73 Tcf of reserves. Under terms of the extension, the field would be in operation until 2055.

In 2010, Inpex won initial government approval to build a 2.5 mmty floating LNG (FLNG) plant that would be used in the first phase of development. The project was delayed four years ago to include a larger capacity FLNG following the increase of estimated reserves at the field. Last year Inpex conducted pre front-end engineering and design work for the onshore development option.

Differences between multinational oil companies and the Indonesian government over oil and gas projects are common and often come from a lack of government clarity over key issues, including revenue sharing schemes, regulatory issues and other concerns that have often driven these companies away.

Indonesia, however, because of aging oil and gas infrastructure and depleting reserves, is in dire need of technological know-how from international energy players.

Wood Mackenzie said in July making progress on the Abadi field was critical as Indonesia’s LNG demand is expected to rise to 13 mmty by 2030 as gas demand grows and production declines.