A sharp recovery in natural gas liquids (NGL) production projected in the Permian Basin won’t be enough to stave off a dramatic decline in overall U.S. output, which Rystad Energy is forecasting will tumble to under 4.2 b/d in 2021. 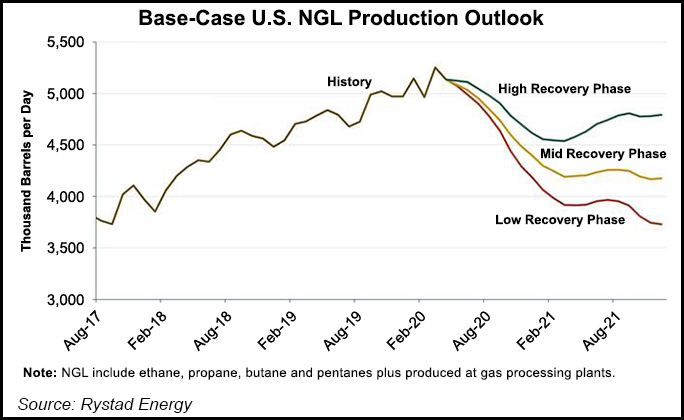 NGL production reached an all-time high of 5.3 million b/d in March, but a massive pullback in oil and gas activity, both from the oil market downturn and Covid-19, is expected to hold down output in basins outside of the Permian over the next couple of years, according to analysts.

While the Permian is forecast to make an impressive comeback by the end of 2021 and match its 2 million b/d-plus basin-wide record from earlier this year, Rystad said that output from the rest of the United States is projected to shrink by about one-third during the same time frame, thereby generating an expected decline of 1.1 million b/d in total NGL production in the country.

“We do not expect to see a significant up-cycle in ethane fractionation spreads, as any optimism in the market in the short-term will be balanced out by ethane that is easily available in the existing rejection stream,” said Rystad’s Artem Abramov, head of Shale Research.

In the next few months, Rystad analysts reason that oil production curtailments and a collapse in nationwide fractionation activity will make the deceleration in NGL output “inevitable.” However, the actual NGL output level approaching the end of 2021 will depend on the attractiveness of NGL extraction, the team said.

Permian NGL production is set to exhibit lower sensitivity than other basins in all of Rystad’s scenarios, with an expected year/year decline of around 200,000 b/d in December in the firm’s base case but with a sharp rebound in both the firm’s base and high-case scenarios.

“In our view, a swift recovery of Permian associated gas and NGL production will put a stop to a sustainable increase in ethane recovery in the basins outside of the Gulf Coast,” Abramov said.

Earlier this month, NGL Energy Partners LP indicated that some customers are back to drilling and completing wells, and the firm expects to see continued completions in the Delaware sub-basin of the Permian at an oil price “anywhere between $35/bbl and $40.”

Meanwhile, NGL’s propane sales have continued to grow despite Covid-19, with further growth expected in the upcoming winter. Butane sales also were higher year/year. But results for the remainder of the year are expected to be impacted by gasoline demand.

Other midstream companies also were upbeat. Enterprise Products Partners LP CEO James Teague said told investors on the company’s recent earnings call that its NGL fractionators “are full and will remain so,” and “and our NGL pipelines, overall, haven’t seen a downturn.”

NGL heavyweight Antero Resources Corp. also was optimistic. The producer indicated that it expects natural gas and NGL prices to strengthen over the coming quarters due to resilient global demand and material supply declines, assuming the current oil price strip.

The combined rig counts in the gassy Marcellus, Haynesville and Utica shales have only declined by 22% since March 6, Antero said, versus a 70% decline in the main Lower 48 oil-heavy plays. Furthermore, the producer pointed to projections for global demand for liquid petroleum gas and NGL derivatives to increase as Asian economies recover from the pandemic.

BTU Analytics LLC also painted a rosier outlook for liquids. The firm indicated that despite the reduced appetite for oil, demand for NGL remains strong and is supporting prices.

“Support for NGL prices has been, and could remain, a small silver lining,” said analyst Erika Coombs.

Nevertheless, the Rystad team said that while substantial ethylene cracker capacity is still likely to be added in the Lower 48 in the medium term, NGL-exposed producers should not expect attractive ethane prices on a prolonged basis in the future.