A coalition of industry groups is objecting to a federal environmental review process that it claims has for years hindered efforts to develop oil and natural gas in the Thompson Divide of Colorado’s Western Slope. 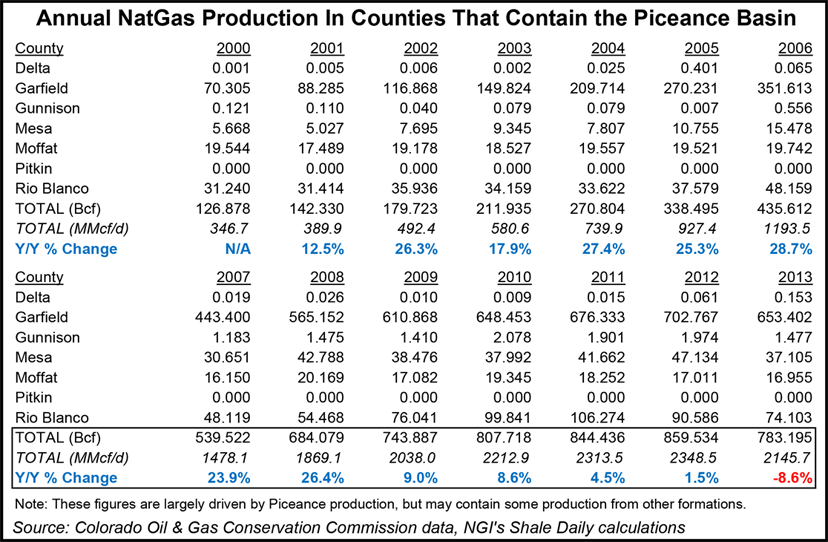 The controversy involves actions by the Bureau of Land Management (BLM) and the U.S. Forest Service (USFS) in the White River National Forest (WRNF), in which Thompson Divide is located. In December the USFS issued a record of decision (ROD) to amend the resource management plan for the WRNF, which combines part of two alternatives, noting that 194,123 acres are available for leasing and 800,555 acres are legally closed to leasing as the result of Congressional direction (see Shale Daily, Dec. 10, 2014).

The extensions were to allow time for BLM’s environmental review to be completed, according to the Western Energy Alliance (WEA), one of three groups that filed an objection with the USFS on Tuesday.

The filing objects to the ROD, which is setting surface restrictions that could lead BLM to restrict or terminate the leases, an industry spokesperson told NGI‘s Shale Daily.

WEA, the West Slope chapter of the Colorado Oil and Gas Association (COGA) and the Independent Petroleum Association of America argued in the objection that previously granted leases cannot be retroactively changed.

The groups are calling for the USFS to withdraw the plan and complete a comprehensive analysis required by the National Environmental Policy Act (NEPA). The groups contend the review process has been “marred by political interference and superficial analysis.” It further “fails to successfully balance responsible energy development with conservation and ignores the broad economic needs of all local communities,” the groups said.

“These changes are in contrast to the federal government’s long-standing policy of encouraging responsible energy development on federal lands under multiple-use principles,” the filing stated. “There are significant potential and attainable natural gas and oil resources in the Piceance Basin underlying the [forest lands].”

While numerous environmental organizations and elected officials have weighed in to influence the current course by the federal agencies, the objecting industry organizations said the current WRNF plan for oil and gas is “the result of a politicized biased process.” As a result, they contend the USFS needs to address “significant flaws” and conduct a new planning process “that is in compliance with the law and its own policies.”

Fanning the fires of opposition to future industry development, American Rivers last year designated Colorado’s White River one of the 10 most endangered rivers in the United States because of the oil and gas activity in and around the area (see Daily GPI, April 15, 2014). The group’s report said “15,000 proposed new oil and gas wells in the region threaten to ruin clean drinking water and fish and wildlife habitat.”