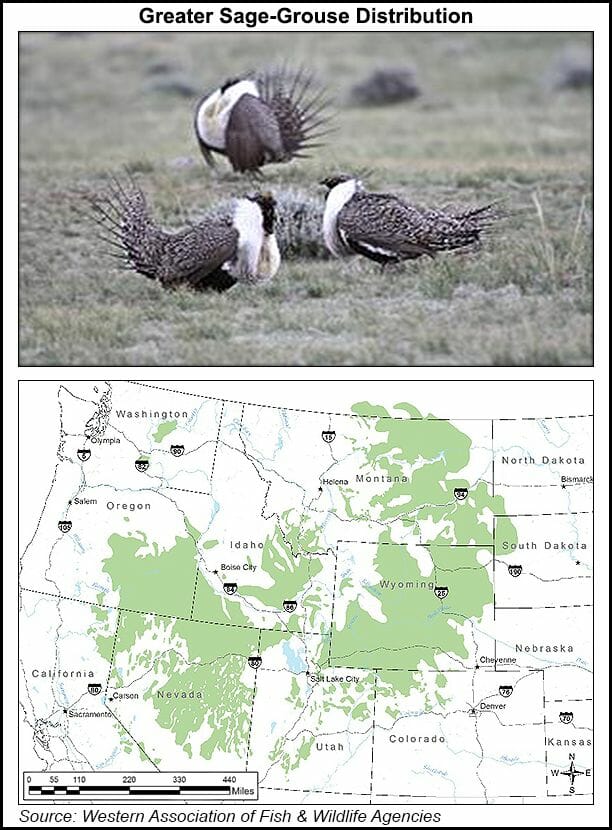 Filed in the U.S. District Court for the District of North Dakota, the WEA-NDPC joint legal action covers four records of decision signed by Interior Secretary Sally Jewell and Agriculture Secretary Tom Vilsack in seven of the 10 states included in the omnibus deal, which drew national attention. It pinpoints all but Wyoming in terms of the oil/gas producing states involved in the agreements.

The lawsuit is challenging the parts of the plans that allegedly do not conform to state plans for greater sage grouse mitigation programs.

“Before the federal sage grouse plans were finalized, oil/gas companies had implemented more than 770 specific protections for sage grouse, while reducing impact on the land by 70% with horizontal drilling and advanced hydraulic fracturing [fracking],” said Kathleen Sgamma, WEA vice president of government/public affairs. Stakeholders, including the federal agencies, had already stitched together successful protection programs for the ground-dwelling bird, she said.

“As a result, sage grouse populations have not only rebounded, but are stable over the long term,” Sgamma said. “Local and state efforts tailored to actual conditions on the ground are effectively protecting the sage grouse and its habitat.”

WEA and the North Dakota producers contend that the land-use plans coming out of Jewell’s announcement last September that the sage grouse would not be listed under the Endangered Species Act have proven “contentious.” Earlier legal action was taken in Idaho and Utah, along with several Nevada counties, by mining, local government, ranching, energy and water interests.

WEA and NDPC lawyers said no one is comfortable with the land-use plans:

Sgamma said that the federal plans “ignore sound science,” and are “exaggerating” the impact of oil/gas development on sage grouse, failing to recognize that the energy production sector is coexisting with the grouse protections.

The lawsuit maintains that the federal agencies violated the U.S. Administrative Procedures Act by “unilaterally and substantively” amending BLM’s oil/gas regulations, and as a result the public has been “shut out” of the decision-making process.