Amid political wrangling over the July 1 presidential elections in Mexico, the government and the energy industry issued a robust response by keeping up the pace of upstream auctions with Round 3, as well as “migrations” and farm-outs to private-sector control of areas overseen by state-owned Petroleos Mexicanos (Pemex). 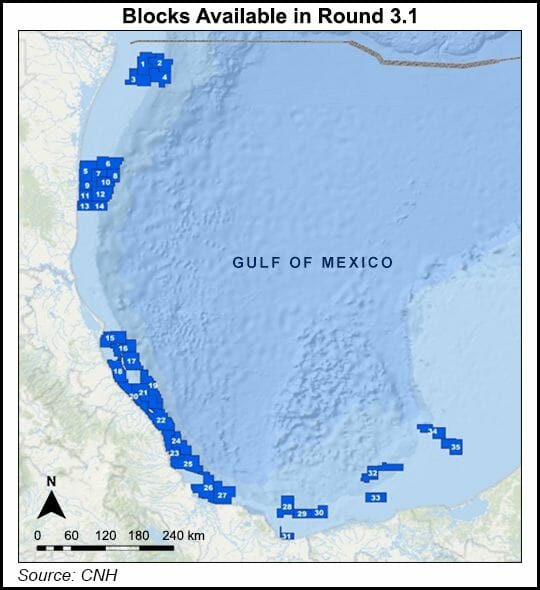 On Tuesday, a migration contract was signed that allows the Mision block in the north Mexican states of Nuevo Leon and Tamaulipas to migrate under a consortium of Mexico’s Grupo R and Tecpetrol known as SMB.

Grupo R, founded in 1960, is privately owned by Ramiro Garza Cantu, a former truck driver and arguably the most powerful provider of services to Pemex, known popularly as “El Fabuloso.”

Mexico’s upstream regulator, the National Hydrocarbons Commission, or CNH, hailed the migration as an example of how the flexibility and tools of the energy reform can strengthen the nation’s industry.

SMB, which was under contract to Pemex to construct infrastructure of the Mision block, would now operate it.

Pemex Director-General Carlos Trevino said the agreement would allow the state company to share the risks and maximize the value of the blocks resources, which include proved, possible and probable reserves of 345 Bcf. The block’s maximum output is expected to reach 103 MMcf/d by 2020.

Total investment in Mision is expected to be $637 million.

The CNH also has approved the migration of seven other blocks.

In addition, on Tuesday Pemex signed two contracts for farm-outs awarded at auction and valued at a total of $540 million.

Cheiron Holdings of Egypt was awarded the Cardenas-Mora farm-out in the southern state of Tabasco, while Germany’s Deutsche Erdoel Mexico (DEA) was awarded Ogarrio in neighboring Veracruz. Both farm-outs feature light crude.

Round 3.1, where bids will be opened on March 27, comprises 35 areas in shallow waters under production-sharing contracts. They include the first offshore areas of the northern Burgos Basin to be explored. Burgos, across the border from Texas, is Mexico’s leading source of non-associated gas.

Also included are offshore locations of the Tampico-Misantla Basin, where the Mexican oil industry was launched in the early years of last century and now is an area that some analysts believe to be of high potential.

The other areas in the round are in southeastern Mexico.

Thirty companies have prequalified for the 3.1 auction. Twenty have met the technical and financial requirements as operators, while the other 10 may take part as nonoperators. The 30 include Pemex along with U.S.-based Chevron Corp. and ExxonMobil Corp., Europe’s BP plc, Royal Dutch Shell plc and Eni SpA, as well as China National Offshore Oil Corp.

Also participating are three Mexican private-sector companies, and several Asian-based operators, a healthy geographical mix, as CNH President Juan Carlos Zepeda has said in response to fears that the reform would spell U.S. domination of Mexico’s oil industry.
Bids for Round 3.1 are to be presented and adjudicated on March 27.

Applications, meanwhile, have seen an unenthusiastic response by the international oil and gas industry for the second auction of Round 3 (Round 3.2) of the upstream series launched by the 2013-14 energy reform, but it is still early days as bids open on July 25.