Some of the pieces, albeit uneven, were being put back in place Tuesday by natural gas and oil operators that have felt the sting of the torrential rains and flash flooding that has claimed lives and property throughout the Front Range of Colorado. 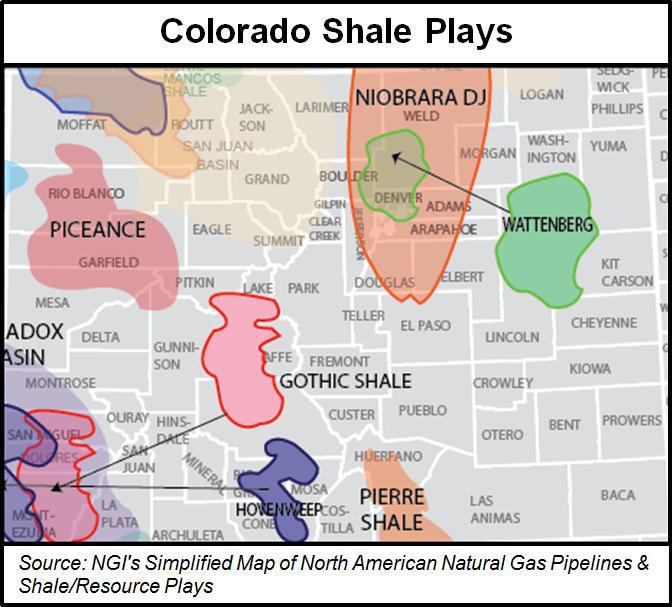 In establishing a special website to handle flood impact and restoration updates, the Colorado Oil and Gas Association (COGA) reported as of Tuesday afternoon that about 1,900 wells were shut in, and more than 600 workers in the field were inspecting operations, conducting aerial and ground surveillance, identifying and determining locations of possible impairments, and repairing any facilities to mitigate the effects from the storm.

Encana Corp., which operates more than 1,200 wells in the Denver-Julesburg (DJ) Basin, brought 99 previously shut-in wells back into service, leaving nearly 300 still shuttered, a spokesman told NGI Tuesday. “We don’t know when the remainder of the wells will be brought back online,” he said. So far, Encana has not found any “spills in reportable quantities” in the general area that has experienced impacted energy production, transportation and utility service throughout the Front Range (see Daily GPI, Sept. 18; Sept. 17).

Separately, Anadarko Petroleum Corp. reported Tuesday that it still had issues with some of its equipment and there were more shut-ins, with about:

“Four of the company’s 13 operated production rigs in the field have ceased operations due to [lack of] road access, but currently, processing and compression has not been impacted, and the majority of completions crews are working; though, future work will be delayed until road repairs and conditions allow for equipment transport,” Anadarko stated. As other energy producers and providers in the area have said, Anadarko expects to be able to better assess the status of its facilities as flood waters continue to recede and road access improves. It is maintaining construction crews on standby ready to assist with any potential issues.

The operators were not estimating the volumes of gas impacted by the continuing shut ins, but one estimate from Thomson Reuters Natural Gas Analytics, using data from LCI Energy Insight, pegged the possible volumes impacted at 600-800 MMcf as of Tuesday.

A Houston-based spokesperson for Kinder Morgan Inc. said “nothing has changed” since a force majeure was declared Monday for a section of El Paso Pipeline Partners’ Colorado Interstate Gas near Fort Morgan, CO, and a section of a pipeline off the Young Gas Storage facility.

“We continue to monitor the flooding along the Front Range, and electronic bulletin boards are being used, as necessary, to provide information about any effects on our pipelines,” the spokesperson said.

Minnesota-based Xcel Energy’s local combination utility on Tuesday called the flood challenges “an unprecedented situation” for utility crews and the state, noting its operations were “moving from an emergency response phase into a restoration and reconstruction mode.”

Xcel reported that as of Tuesday morning close to 4,600 customers, mostly in the hardest hit areas of Boulder County and Lyons, were without natural gas. We have been able to restore electricity service to customers as waters recede. There are currently 517 customers without electricityâ€”275 in the city of Boulder and 242 in Greeley.

The industry has pitched in to help with the relief efforts. COGA has established a Floods Update — Oil/Gas Response page on its website, www.coga.com.