The revival of the U.S. industrial sector will be “the most significant driver” to higher long-term natural gas prices, lifted by new ethylene crackers, ammonia plants and natural gas-to-liquids (GTL) facilities fed by unconventional natural gas, according to an analysis by Raymond James & Associates Inc. 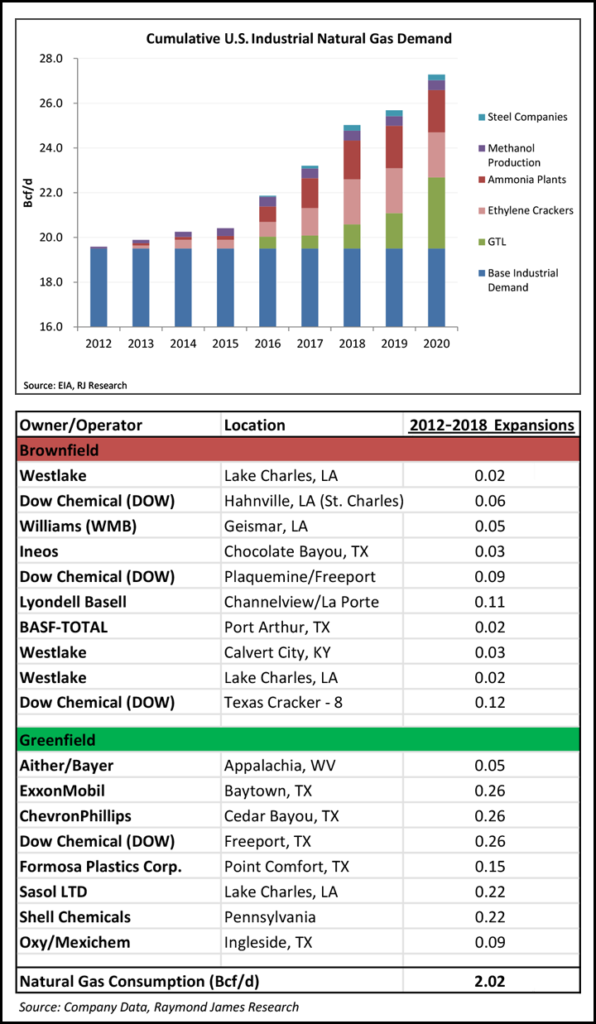 “Based on our sector-by-sector analysis, future U.S. natural gas demand growth will receive a boost from the industrial sector and will lead to a gradual improvement in gas prices over the next five years,” said analyst J. Marshall Adkins and associate Edward Rowe. “Based on the large number of proposed projects in gas-to-liquids (GTL), methanol, ethylene crackers and fertilizer, there could be a sharp gas demand surge that drives gas prices even higher and brings rigs back to the dry gas plays.

“In sum, we believe that this trend will facilitate higher prices along the back end of the gas futures curve and supports an upward bias to our current long-term Henry Hub gas price forecast of $4.25/Mcf.” Adkins two weeks ago said every major gas play in the United States could make money at prices above $4.00 and generate a “decent rate of return” at prices above $4.25 (see Shale Daily, June 11).

“Industrial demand accounted for 26% of total U.S. natural gas demand in 2012, and, with the U.S. natural gas forward curve indicating another four to five years of sub-$5.00/Mcf domestic natural gas prices, there is a clear incentive for gas-intensive manufacturers, petrochemical, fertilizer, methanol, gas to liquids and other gas-intensive industries to ramp up their U.S. operations,” said Adkins.

“With an abundant gas supply and an extremely advantageous position along the global cost curve (i.e., cheap U.S. gas versus much more expensive oil for overseas industries) in terms of feedstock for their operations, the U.S. industrial sector should be a clear beneficiary of cheap U.S. gas.”

Industrial gas use is on the rise, according to the U.S. Energy Information Administration (EIA), which said gas use was higher for industrial purposes by more than 3%, or 0.6 Bcf/d, from January through April versus the same period of 2012. “Higher industrial gas usage reflects recent economic gains and sustained, historically low natural gas prices that have provided operators of natural gas-intensive industrial facilities in the United States a cost advantage relative to competing facilities that rely on higher-cost energy sources.”

The electric sector had overtaken industrials as the largest gas consuming sector, but there has been “modest but consistent annual growth in industrial gas use following the sharp economic decline during 2008 and 2009,” EIA noted. “Unlike the electric sector, whose demand for natural gas is highly price sensitive, the industrial sector is slower to respond to changes in price. Many industrial plants can increase marginal production relatively quickly, but they often have limited flexibility when choosing fuel energy and feedstock sources. Entirely new petrochemical or manufacturing plants are capital-intensive and take several years to come on line.”

Methanol production is one area drawing attention, noted Adkins. “We are currently aware of five planned additions for U.S. methanol production, which could add an aggregate 0.4-0.5 Bcf/d of natural gas demand between now and 2015/16,” with the assumption of 35-40 MMBtu of natural gas/metric ton of methanol. Five ammonia and fertilizer plants also are being developed or could be restarted over the next year, which may add 950,000-1 million tons/year to U.S. production, reducing 9-12% of ammonia imports or 0.1 Bcf/d. “However, there are a number of possible/likely ammonia plant expansions or projects beyond 2013 that should drive gas demand further.”

For some perspective, the United States imports 12-14 million tons of nitrogen per year, Adkins noted. “The average natural gas consumption for anhydrous ammonia production is approximately 30-40 MMBtu per ton. If the U.S. reduced these imports by half, this would equate to 0.4-0.7 Bcf/d of incremental gas demand…”

Ethylene expansions also are a top draw. By Adkins’ estimates, there are 10 brownfield facilities that are planning ethylene expansions, and eight greenfield crackers in the works. Three petrochemical plants already have filed for permits, and Raymond James analysts believe “at least four will be built, adding nearly 1 Bcf/d of incremental demand. Gas-to-liquids is a harder segment to forecast given that no investment decisions have been made regarding the proposed GTL mega-projects, but if even one such facility were to be built, it would add a very meaningful amount of demand.”

Sasol Ltd.’s $16-21 billion GTL plant in Westlake, LA would be the second largest commercial plant of its kind in the world after Royal Dutch Shell plc’s Pearl plant in Qatar (see Shale Daily, Dec. 4, 2012). The second huge GTL plant being considered is by Shell to take advantage of Marcellus Shale supplies; a go-ahead is unlikely before 2015 (see Shale Daily, Feb. 4).

“If both projects end up materializing, that would amount to as much as 3 Bcf/d of additional gas demand by the end of the decade,” Adkins noted. He also doesn’t discount the small-scale GTL plants, which are also being proposed in the Marcellus and along the Gulf Coast.