India, one of the world’s largest LNG importers, has unveiled a $30 billion plan to triple its clean power generation capacity by 2030 that would rely heavily on solar and wind to help reach a net-zero emissions target by 2070. 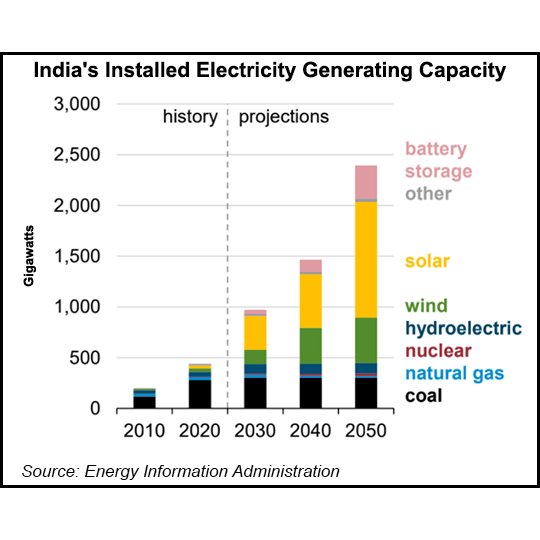 For now, the country continues to eschew gas in favor of coal and renewables. Record high gas prices have kept it on the sidelines.

“For LNG to be competitive, we would have to see the levelized costs of electricity at perhaps $40/MWh levels, which would need gas supplied at $5/MMBtu,” Ramesh said.

Prompt Asian benchmark LNG prices are currently trading in the high $20/MMBtu range and reached nearly $70 at one point last year. The fall in prices has some buyers in South and Southeast Asia seeking a limited number of spot cargoes again, but they still remain too high for widespread tenders.

India is one of the unique countries where the power sector is not an anchor LNG customer, Ramesh explained. Other parts of its economy rely on the fuel.

“Instead it will be urban networks and industries – refineries, petrochemicals, fertilizer plants – where we see scope for LNG import growth going forward,” he added.

In the medium term, given the high international prices and growing domestic production, Rystad expects India’s LNG imports to stay flat at 19 Mt through 2025 and increase towards 25  Mt by 2030 to support rising industrial demand.

Purva Jain, an energy analyst at the Institute for Energy Economics and Financial Analysis, said India updated its nationally determined contribution earlier last year to reflect its commitment of 50% of cumulative installed electricity capacity from non-fossil fuel energy by 2030.

“However, India also has a target of 15% gas in its energy mix by 2030,’ Jain told NGI. “At present, the share of gas stands at about 6.4%. So this 15% gas target will be very difficult to achieve due to gas availability, prices and infrastructure.”

The draft also included plans to build more than 19,300 miles of pipeline to cover 407 districts by 2023. But this draft was reportedly created on a gas price assumption of around  $10/MMBtu.

“There is insufficient domestic gas available to meet demand and using LNG is not economically viable in most cases because prices are volatile and high,” Jain said.

India’s solar power production between 2017 and 2021 more than tripled, according to BP plc’s Statistical Review of World Energy.  But development plans under the  $30 billion clean power initiative would take time and require a huge effort to install interregional high-voltage lines and lay undersea cables to connect and deliver electricity generated by offshore wind farms and solar facilities.

“India’s 500 GW target is an ambitious goal,” Columbia University’s Center on Global Energy Policy (CEGP) wrote in a December report. “Meeting the target of 500 GW installed non-fossil capacity, however, will entail an addition of 328 GW over the next 8 years.”

India has increased its non-fossil fuel power generation by 12.8 GW/year from 2016 to 2022. To attain its 500 GW goal, however, it would have to make an annual 38 GW increase for the next eight years, according to CEGP.

“Only China has ramped up non-fossil capacity at a rate faster than this, increasing by an annual average of 93 GW since 2016,” CEGP said.