Alberta will all but drop off the North American map as a merchant of natural gas to markets beyond its borders over the next 10 years, predicts the province’s supply development authority. 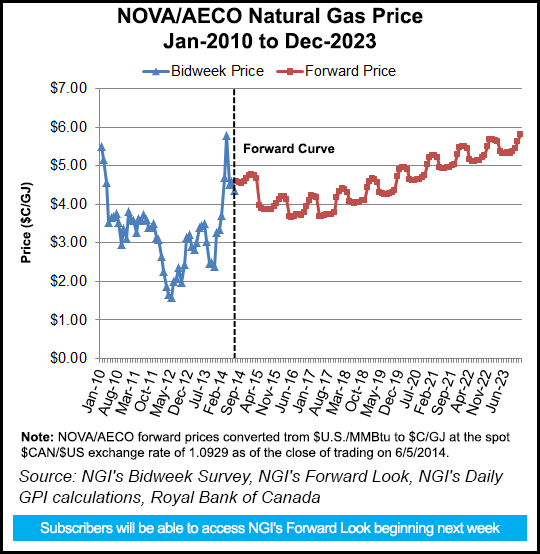 In its latest annual reserves review and forecast, the agency attributes the forecast drastic role change for Canada’s chief gas-producing jurisdiction to growth of its own markets as much as to natural depletion of aging conventional wells and tepid prices.

The biggest single factor in the outlook is growth of thermal oilsands production sites, which burn averages of up to 1.2 Mcf/d of gas per barrel of output to make steam for underground extraction systems.

Oilsands production is forecast to more than double by hitting 2.8 million b/d as of 2023 compared to 1.2 million b/d last year. The fastest-growing method is the biggest gas user: steam-assisted gravity drainage (SAGD), which employs pairs or triplets of horizontal wells to inject heat and pump out oil simultaneously.

But as in the United States, Alberta is expected to rely increasingly on gas for generating electricity. The AER’s calculations forecast that power stations across the province will burn 1.3 Bcf/d as of 2023, up 65% from the 0.79 Bcf/d recorded in 2013.

Unlike financial analysts promoting shares in independent producers that remain heavily reliant on gas, the AER does not foresee the price improvement owed to the severe 2013-2014 heating season blowing up into a full-scale recovery to 2005 and 2008 market peaks.

The price recovery is expected to be too weak to stimulate a revival of formerly booming gas drilling, which has all but died out and been completely replaced by oil activity and wells into liquids-rich shale deposits.

While differing in details, the new AER outlook supports previous forecasts by the National Energy Board that British Columbia will replace Alberta as the prime Canadian source of new gas production.

Shale supplies in the U.S. are so large — and have so much potential to grow, especially the Marcellus Shale — that they will forestall repetition of spikes in annual average prices and continue to capture former mainstay Alberta markets in eastern Canada, the AER forecast suggests.

The outlook of the expanded supply development and environmental regulator (an enlarged replacement of Alberta’s 75-year-old gas and oil field watchdog, the former Energy Resources Conservation Board) was corroborated Thursday by the Alberta Electric System Operator (AESO), an independent power supply supervisory and planning agency.

Gas will stay low-cost enough to stand out as the prime fuel replacement for coal at power stations despite some growth in wind and solar power, AESO predicts. Although Alberta is renowned for wind blowing down off the Rocky Mountains and long northern days of bright sunshine, the province’s deregulated electricity market makes power generation a highly competitive commercial field with little room for subsidizing more environmentally fashionable alternatives to coal than gas.