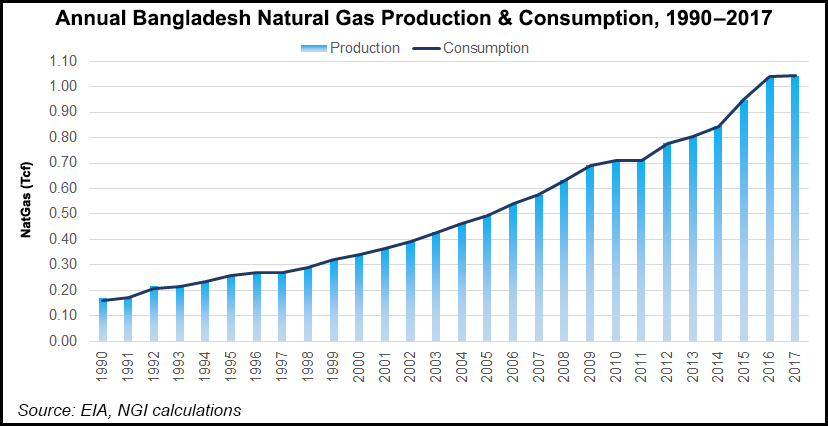 Around $2.5 billion would be invested in the project, according to state news agency Bangladesh Sangbad Sangstha.

ACWA expects to start the investment in 2020, according to Chairman Mohammad Abdullah Abunayyan. The study on technical and financial feasibilities is to begin soon and a power purchase agreement is scheduled to be signed within six months, he said.

The new project would be ACWA’s largest gas-to-power development and its first association of its kind with Saudi Aramco. ACWA has a portfolio of power generation and desalination water production plants in 10 countries, including those in the Middle East and North Africa.

The deal comes as Bangladesh continues to put infrastructure in place to offset a gas crunch from a production shortage. In 2014, Bangladesh was the eighth largest natural gas producer in the Asia-Pacific region, producing 833 Bcf annually, all of which was domestically consumed, according to the U.S. Energy Information Administration. Although Bangladesh’s gas production has increased nominally year/year since then, its production is expected to decline by more than 25% by 2025, according to Wood Mackenzie.

Bangladesh’s economic growth has averaged more than 6%/year for the past decade, healthy growth considering the contraction of many economies during that time. The economy is also projected to grow this year and next.

Bangladesh has two operational floating storage and regasification units, with a combined regasification capacity of around 7.5 million metric tons/year (mmty). It is also building a land-based terminal that can import an additional 7.5 mmty of LNG, which is expected to be onstream in five years.

To finance its LNG development, the Bangladeshi government in July hiked the price of domestic natural gas by a weighted average of 32.8%, the largest increase in the country’s history. The politically unpopular price increase sparked a backlash from export-oriented industries, but it would allow state-owned oil and gas company Petrobangla to increase revenue as it seeks to develop more gas infrastructure.

Bangladesh’s LNG demand, projected at 6 mmty by 2020 and potentially up to 15 mmty after it brings its third LNG facility onstream, would also offer a much needed market for producers and traders amid a historic supply overhang that is projected to last until at least 2022. Bangladesh receives its LNG supply from Qatar and Oman, although informal talks have been held for supply deals with Australia.

Smaller countries like Bangladesh have been seen as opportunities to develop and expand markets. Bangladesh is also taking advantage of the recent drop in LNG spot prices in Asia by seeking to secure cargoes for next year. Last month, it shortlisted 17 companies for its tender as it plans to procure about 1 mmty on the spot market in 2020.

Spot LNG prices in Asia, home to around two-thirds of global LNG demand, dipped below the $4.00/MMBtu price point this summer amid warmer temperatures in North Asia, new supply entering the market, as well as ample inventories by legacy buyers Japan, China, South Korea and Taiwan.

Prices finally received support last week, with spot deliveries for December to Northeast Asia reportedly at $6.80/MMBtu, an eight-month high, up 35 cents on the previous week. Prices for November delivery are estimated at $5.90/MMBtu. Price points are still off from this time last year when spot LNG in the region fetched more than $11.00/MMBtu.

Spot prices could face even more pressure in December when the first phase of Russia’s Power of Siberia natural gas pipeline to China becomes operational, likely causing some Chinese city gas suppliers in the north to resell some of their winter cargoes on the spot market. However, the initial impact will be limited because of the amount of gas being piped during the first phase.