Egypt’s Suez Canal Authority (SCA) is increasing transit tolls next year, adding to the costs associated with shipping LNG and other fuels through the key trade route. 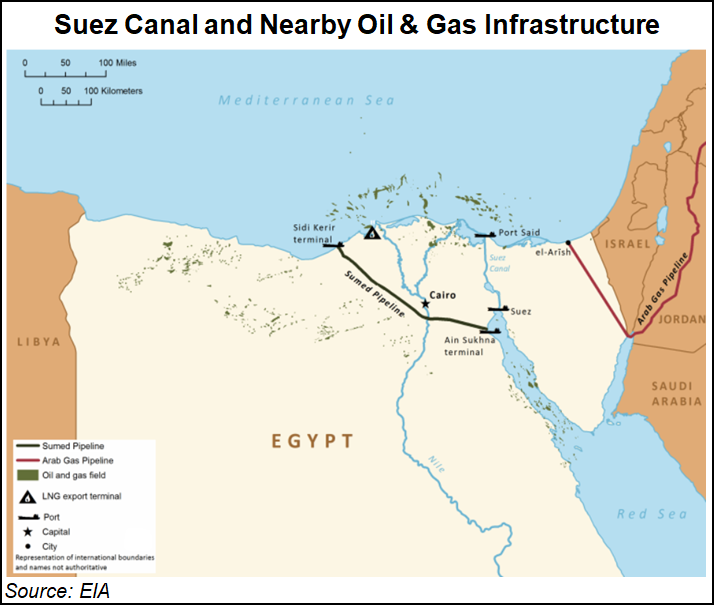 Fees will increase by 15% for tankers carrying oil and petroleum products, and by 10% for dry bulk carriers and cruise ships.

Over the last year, 35.8 million tons (Mt) of LNG has been transported through the Suez, Booth told NGI, up 4 Mt year/year. In the most recent period, 54% of the transits were destined for Europe and largely originated in the Middle East.

The SCA increased transit fees in February and again in March. Cruise ships and tankers transporting LNG were exempted from the fee rise in February, but a 2015 reduction of 25% granted to LNG tankers was modified to 15% in February of this year.

“In the longer term, this [fee increase] is another add to the inflationary pressure of shipping costs, with Middle East to Europe cargoes the most impacted,”  Booth said.

“We expect that cargo economics will be the primary driver for global LNG flows in the coming year. The current spike in spot shipping rates is primarily driven by high demand for longer time charters, as fleets hold fleet length in these volatile times.” Shipping rates have jumped sharply this year and are already well above $100,000/day.

“When it comes to spot business, whether the arbitrage between Europe and Asia is open or not is more important than canal toll increases.”

“This rise in energy prices increases the savings that ships achieve by transiting through the Suez Canal compared to other alternative routes,” Rabiee said.

The Suez Canal is the shortest maritime route between Asia and Europe. Around 20,650 vessels passed through the canal last year, a 10% increase compared to 18,830 vessels in 2020.The SCA is working to widen and deepen the waterway’s southern part, since a vessel ran aground and closed off the canal in March 2021.