Sempra Energy on Wednesday unveiled a plan to unify its U.S. and Mexico subsidiaries that own liquefied natural gas (LNG) assets. 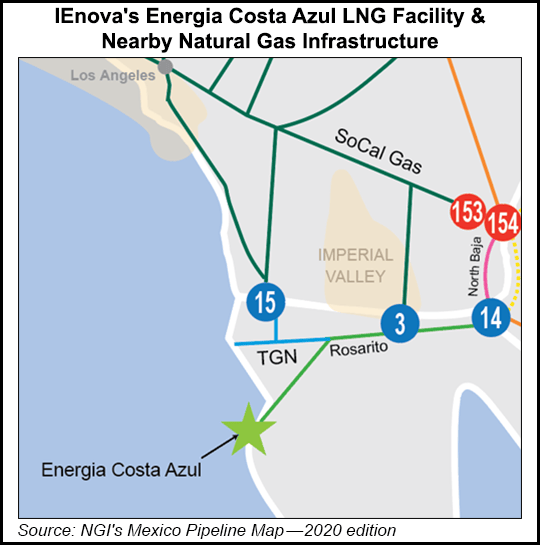 The move to combine Sempra LNG and Mexican firm Infraestructura Energética Nova (IEnova) comes after the San Diego-based operator last month funded construction of the $2 billion Energia Costa Azul (ECA) LNG export terminal, their 50-50 joint venture. The export project would use U.S. feed gas and would be built at the site of the mothballed ECA LNG import terminal in Baja California, Mexico. The import terminal was built before the unconventional gas boom.

Sempra plans to acquire the 29.8% of the IEnova shares it does not own and form Sempra Infrastructure Partners. The partnership would own all of Sempra LNG and IEnova assets, spokeswoman Christina Ramirez told NGI.

The new subsidiary’s LNG portfolio would include 45 million metric tons/year (mmty), equivalent to about 5.8 Bcf/d. It also would own gas infrastructure, including pipelines to send U.S feed gas to ECA, and a Mexican renewable energy portfolio of about 4 GW, management said.

Sempra has started a process to sell a minority interest in the new entity by the end of 1Q2021 to help fund its growth.

“We intend to form a new business platform that will unify ownership of Sempra LNG, a leading developer of U.S. LNG export infrastructure, and IEnova, one of the largest private energy infrastructure companies in Mexico, to form an exciting new company focused on the development and construction of LNG export capacity, natural gas infrastructure and renewable energy generation,” CEO Jeffrey Martin said in a memorandum filed with the U.S. Securities and Exchange Commission (SEC).

Sempra LNG owns 50.2% of the existing 15 mmty Cameron LNG export terminal in Louisiana, which may be expanded. It also owns the 13.5 mmty Port Arthur LNG terminal southeast of Houston in partnership with an affiliate of Saudi Arabian Oil Co., aka Saudi Aramco.

ECA was the first LNG export project sanctioned in Mexico and the only one in the world to date this year. The first phase, with capacity of 2.5 mmty, is expected to come online in 2024. It would have an advantage over existing U.S. projects as it could ship U.S. gas to East Asia without traversing the Panama Canal.

Sempra would exchange shares owned by other parties to acquire ownership of IEnova by the end of 1Q2021, subject to regulatory approval.

Sempra would offer to exchange one common share for an IEnova share at an exchange ratio of 0.0313. Sempra intends to list its exchange shares on Mexican stock exchange Bolsa Mexicana de Valores SAB de CV. The offer has an implied price of 82 Mexican pesos, or $4.08/IEnova share.

IEnova’s website indicates 29.83% of its shares are not owned by Sempra.