The U.S. Supreme Court on Monday issued a unanimous order reinstating the use of a permit employed to fast-track oil and gas pipeline construction, but the ruling specified that it did not apply to the U.S. leg of the hotly contested Keystone XL crude oil pipeline that is at the center of the debate. 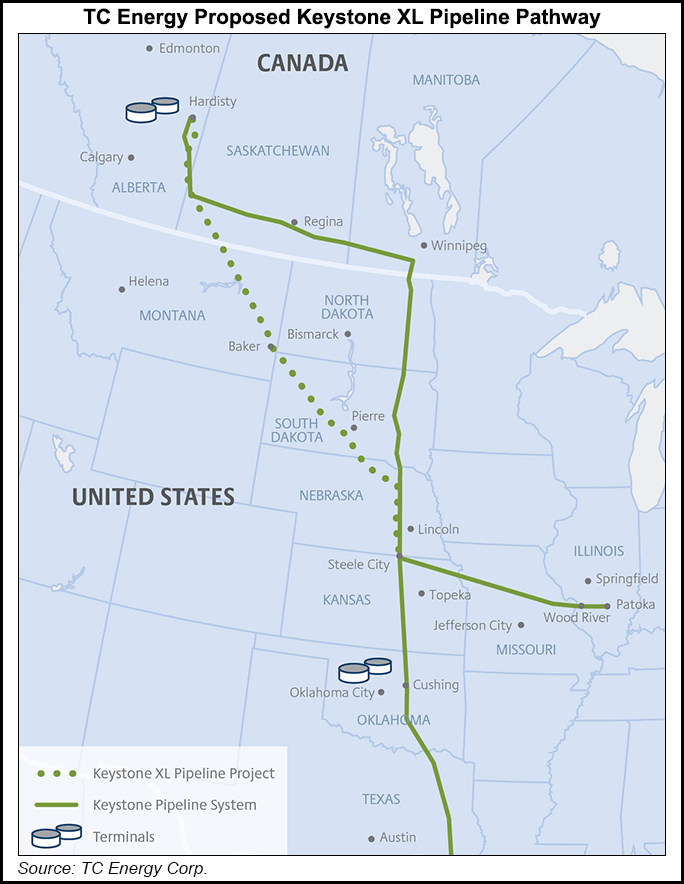 The Supreme Court ruling upheld the injunction on the Nationwide Permit 12 (NWP 12) permit in place for Keystone XL while the U.S. Army Corps of Engineers appeals a lower court’s vacatur of the project’s approvals to the U.S. Court of Appeals for the Ninth Circuit, and potentially, to the Supreme Court. Southern District of Montana Judge Brian Morris in April vacated the NWP 12 water-crossing authorization issued by the Corps.

TC Energy said that it remains committed to the future of the project, even though court filings indicate that refusal to restore the Keystone XL permit would delay most U.S. construction until 2021.

However, the 600-plus member organization said that declining to revive the permit for Keystone XL is “short-sighted as the project has already been thoroughly reviewed for well over a decade.

“As this case moves forward, we will urge the U.S. Court of Appeals for the Ninth Circuit to reinstate the permit for all pipeline projects, including Keystone XL,” API said.

Work continues on the Canadian legs of the US$8 billion Keystone XL, using C$7.5 billion (US$5.3 billion) in financial aid committed by the Alberta government in March. The line would deliver 830,000 b/d from Canada’s top natural gas user, thermal oilsands production.

Environmental victors in Montana predicted that if Morris’ ruling stands, Keystone XL would be barred from crossing rivers and streams along its entire 1,688-kilometer (1,013-mile) U.S. leg. Democratic Party presidential candidate Joe Biden has deepened concerns over the project’s viability by vowing, if he wins the fall U.S. election, to scrap the Keystone XL approval granted by Trump.

However, Monday’s Supreme Court ruling bodes well for other embattled projects like Mountain Valley Pipeline, which is designed to move gas from the Marcellus and Utica shales. MVP received its Federal Energy Regulatory Commission certificate in late 2017 and started construction soon after.

ClearView Energy Partners LLC analysts continue to believe the project could enter into service in early 2021 as planned, due to the progress made on its permits and construction before the U.S. Fish & Wildlife Service suspended its Endangered Species Act (ESA) permits for revision to stave off a court case.

“If environmental groups attempt to challenge a reissued NWP 12 permit on the basis that the Corps failed to do the programmatic review, we believe that argument is likely to fail, because the ESA review that has just been supplemented would appear to provide the ‘project level’ review on endangered species impacts that Judge Morris found Keystone XL’s authorization lacking.”

However, the ClearView team was not as optimistic regarding the Dakota Access pipeline (DAPL), which was ordered to be temporarily shut down and emptied while the Corps completes an environmental impact statement.

On Tuesday, U.S. District Judge James Boasberg of the District of Columbia denied a request by DAPL for a provisional stay of his order pending the preparation of the pipeline’s appeal to the U.S. Court of Appeals for the D.C. Circuit. The Native American Tribes led by the Standing Rock Sioux opposed Dakota DAPL’s request, court filings show.

In its request, DAPL argued that it is impossible to shut the pipeline down in the 30 days directed in the judge’s order, specifically noting that nitrogen purging alone would require 90 days while the pipeline is still operating. While Boasberg declined to preemptively stay his order, he said that DAPL can proceed with a conventional motion for stay once the appeal is docketed at the D.C. Circuit, which could occur as early as Wednesday. Boasberg would then set a briefing schedule for the motion at that time.

“It might take a few weeks for Judge Boasberg to act on the stay request, while the countdown on the 30-day shutdown order continues,” said ClearView analysts. “Judge Boasberg directed that the pipeline be emptied’ by August 5.”

Nevertheless, the ClearView team said Boasberg “might be more likely than not” to deny a stay pending review of his vacatur order, and believe it is more likely that DAPL and the Corps would need to try and secure one from the D.C. Circuit. The Corps and Keystone XL undertook a similar process in the NWP 12 ruling at the Montana District Court and a subsequent appeal to the Ninth Circuit.

“Those motions followed a schedule offered by the Corps and TC Energy, but were not constrained by a 30-day window such as that which Dakota Access faces,” ClearView said.