Public Service Enterprise Group Inc. (PSEG), one of the nation’s largest electric companies, has announced a goal to eventually eliminate carbon emissions from its power generation fleet, bringing the company closer in line with other large utilities across the country aiming to achieve similar targets. 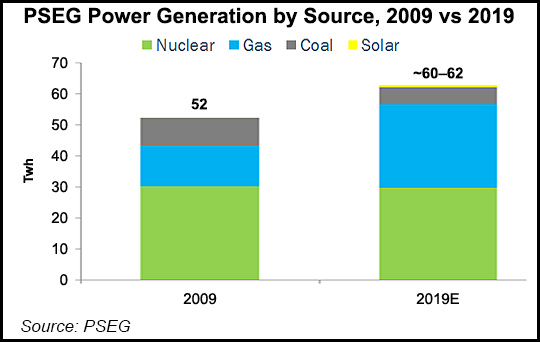 Newark, NJ-based PSEG said it expects to cut carbon emissions from the fleet by 80% below 2005 levels by 2046 as part of a broader initiative to attain net-zero carbon emissions by 2050, “assuming advances in technology and public policy.” To support those goals, the company said it has no plans to build or acquire fossil fuel-fired power plants.

“The science of climate change is clear and we believe society must move beyond simply heeding warnings to acting on them,” PSEG CEO Ralph Izzo said. The company recognizes there “is no magic bullet” to get the country to a 100% carbon free future, but “we know climate change and the need to decarbonize our economy mean that this company and others like it must work toward a greener future.”

It joins other utilities across the country that are aiming to reduce their carbon footprints as state legislatures, particularly those under Democratic control, are increasingly implementing and proposing policies to wean constituents off fossil fuels, which could ultimately impact natural gas demand.

PSEG owns about 11,500 MW of generating capacity, and roughly 6,000 MW consists of combined- and simple-cycle power plants that use oil and natural gas. The company said Tuesday that it’s also completed its 1,800 MW combined-cycle gas turbine construction program, as commercial operations started in June at the 485 MW Bridgeport Harbor 5 facility in Connecticut.

Additionally, PSEG owns 3,700 MW of nuclear generating capacity, some of which would benefit from annual subsidies recently implemented in the state to keep those facilities open.

By 2021, the company expects to have retired or sold more than 2,400 MW of coal-fired generation, bringing it close to eliminating the fuel from its portfolio. The company said in June it agreed to sell its interest in two coal-fired power plants in western Pennsylvania.

PSEG also has invested heavily in solar energy resources, dumping $1.8 billion into 674 MW of solar, including 262 MW in New Jersey and 412 MW in 13 other states.

The move to further lower carbon emissions at PSEG comes at a time when New Jersey’s Democratic Gov. Phil Murphy is pushing his goal of the state generating 100% of its power from renewables by 2050. State regulators recently released a draft plan aimed at advancing that target.

In 2017, PSEG also sold its stake in the PennEast Pipeline, which would move more than 1 Bcf/d from Appalachian shale fields to parts of Pennsylvania and New Jersey. PSEG said it sold the stake to better focus on its generating fleet. The pipeline, however, has been delayed in the face of staunch opposition from the Murphy administration and environmental groups.