Evolution Midstream LLC said it has broken ground on its Jewell natural gas processing plant in Converse County, WY, in the heart of the Powder River Basin (PRB). 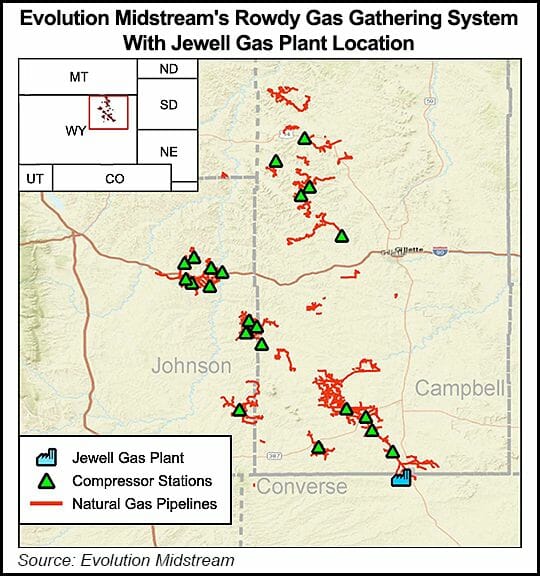 The Denver-based company said Jewell will initially provide 40 MMcf/d of processing capacity, increasing to 100 MMcf/d in 2019. The facility will include a 4,500 b/d fractionation and stabilization train designed to extract purity propane and provide stabilized condensate for sale in local and interstate markets.

Jewell will also offer residue gas connections to the MIGC and WIC interstate pipelines, which extend to the Cheyenne Hub. The facility is scheduled to begin operations in 4Q2018.

“The PRB continues to emerge as one of the most attractive oil plays in the Lower 48 and the Jewell facility further solidifies Evolution’s leading position in the region,” said CEO Raj Basi. “The plant’s strategic location and innovative technology will differentiate our offering in the basin while allowing our team to better anticipate and reliably provide for our customers’ immediate and long-term gas-gathering and processing needs.”

Interest in the PRB has been on the rise as of late, in part due to takeaway constraints in the Permian Basin. The play figured prominently in 2Q2018 earnings calls by EOG Resources Inc., Devon Energy Corp., Chesapeake Energy Corp. and Anadarko Petroleum Corp., as well as in presentations at last week’s EnerCom Conference in Denver by privately-held Anschutz Exploration Corp. and Samson Resources II LLC.

Midstreamers have been ramping up their PRB activity, too. Last February, Tallgrass Energy Partners LP (TEP) and Silver Creek Midstream LLC announced a joint venture (JV) to develop the 100,000 b/d Iron Horse crude oil pipeline, which would connect Silver Creek’s new gathering system and Midway terminal in Converse County to a TEP terminal and other pipelines at Guernsey, WY, in neighboring Platte County.

In anticipation of growth in the PRB, TEP announced in May that it was considering adding a 120 MMcf/d processing train to its natural gas processing plant at Douglas, WY. Two months later, Crestwood Equity Partners LP announced plans to expand the Jackalope natural gas gathering system and the associated Bucking Horse gas processing facility in Wyoming. Jackalope is a 50/50 JV between Crestwood and Williams Partners LP.

Evolution was launched in July 2015 and the next month secured a $300 million equity commitment from EnCap Flatrock Midstream. The company acquired the 1,000-mile Rowdy natural gas gathering system from Lucid Energy Group for an undisclosed price in July 2017. The Rowdy system serves oil and gas producers in Wyoming’s Campbell, Converse and Johnson counties.

In other news, an unnamed affiliate of Silver Creek Midstream LLC has exercised its option to acquire Genesis Energy LP’s PRB midstream assets for approximately $300 million in cash.

The assets include Genesis’ PRB Pipeline, an associated crude oil gathering system and a rail facility. Genesis said it would use proceeds from the sale to pay down its debt. The sale, which is subject to customary closing conditions and regulatory approvals, is expected to close in 3Q2018.