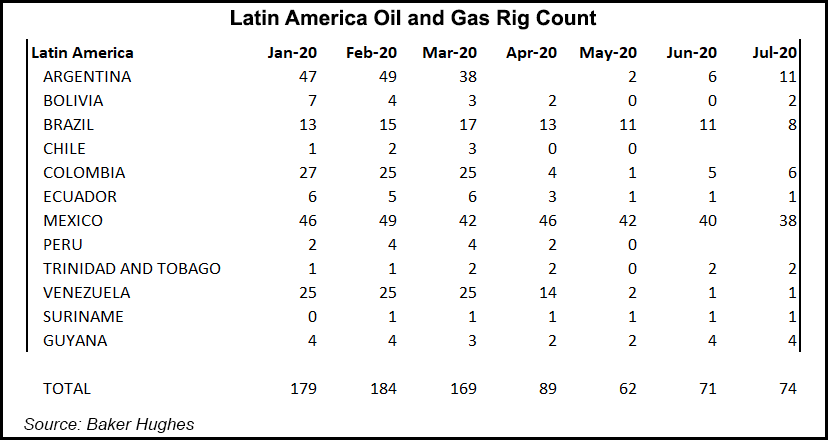 South America, driven by Brazil and its vast offshore pre-salt development, has seen deepwater operational expenditure (opex) drop more than any other region this year, according to Rystad Energy.

In deepwater, South America is dominated by Brazil. State oil company Petroleo Brasileiro SA (Petrobras) alone accounted for nearly 88% of South America’s deepwater opex in the 2013-2020 period, according to Rystad. Overall regional opex fell from roughly $26/boe in 2013 to $12.7/boe in 2020.

The deepwater gains are part of a push in Brazil’s upstream segment to keep costs in check amid turmoil in the energy industry. Petrobras has also cut its employee count by roughly 22% and plans total cost cuts of around $2 billion in 2020 by lowering its overhead and relinquishing office space.

Still, Brazilian oil production is expected to increase this year, the Organization of the Petroleum Exporting Countries (OPEC) said last week in its monthly report. Brazilian crude oil production rose 25,000 b/d in June following declines from February to May.

Output in pre-salt offshore areas was the main reason for production recovery in June, particularly from the Lula field, OPEC said. Brazil’s oil production in the second half could be higher than in the first six months as projects continue to ramp up, while its liquids production in 2020 is forecast to increase by 20,000 b/d to 3.74 million b/d.

“The Covid-19 inflicted uncertainty means that service companies, operators and investors will continue to watch their budgets and stay clear of any non-profitable or high-risk projects in the months and years ahead,” Rystad analysts said. “Due to the generally low and turbulent Brent spot price this year, investments and projects that do not meet the cost and risk criteria set forth by the companies are likely to be delayed.”

Yet in Latin America, Mexico continues to be the outlier and has kept its rig count up throughout the March-July period, BKR statistics showed. Mexico had 38 rigs active in July, compared with 37 in July last year.

Mexico now accounts for more than half of the 74 rigs active in Latin America. When the coronavirus started to spread in Latin America in March, it accounted for under one-quarter of the total.

The drilling push is part of Mexico’s plan to strengthen state oil company Petróleos Mexicanos (Pemex) and ramp up production at all costs despite deep financial trouble at the firm.

After a recent adjustment, Mexico now aims to hit oil production of 1.8 million b/d this year, with a 100,000 b/d increase every year to reach 2.2 million b/d in 2024, when President Andrés Manuel López Obrador’s term comes to an end.

Liquid hydrocarbons production at Pemex was 1.693 million b/d in the second quarter, flat compared with year-ago output of 1.690 million b/d.

Pemex reported a loss of 44.3 billion pesos ($2 billion) in the quarter compared with a loss of 53 billion pesos in 2Q2019. In the first quarter, the heavily indebted state-owned operator lost a staggering $23 billion.

The company expects capital expenditures to be 178 billion pesos this year, or around $8 billion, compared with 111 billion pesos in 2019.

In part because of the push to keep operations running, as of Wednesday 292 Pemex workers had died because of complications related to the coronavirus, according to company figures.

During a webinar on Wednesday organized by Mexican consultancy EPLOC, energy expert Miriam Grunstein of Brilliant Energy Consulting said the state oil company was “very ill” and the only way to strengthen it was to ensure it did not return to becoming a monopoly.

“The biggest challenge for Pemex is to convince investors to invest in it,” she said. The company needs to stop being a “tool of public policy in order to survive.”

Asked whether the landmark energy reform of 2013-2014 might be scrapped in Mexico, Grunstein said “the current law serves what the president wants. Without changing anything, he’s already stopped rounds, stopped open seasons… everything he wants to do he can do with the actual system.”

She added that “changing the constitution is a bad idea because it creates a lot of legal uncertainty,” and “if we want someone to invest one more peso in this country, we need to stop being constant reformers of the constitution.”