Forecasts for record-level cold to start the month gave March natural gas bidweek traders something to ponder even as the inevitable warm-up — set against a generally bearish supply backdrop — weighed on market sentiment with the shoulder season fast approaching. 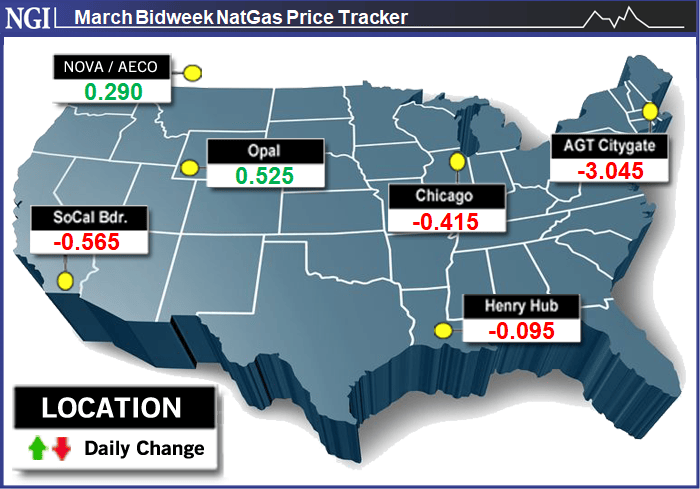 Strong gains for a number of locations in the Rockies and California couldn’t offset widespread moderation throughout the eastern two-thirds of the Lower 48; the NGI March Bidweek National Avg. slipped 29.0 cents from February to $2.945. That’s still well ahead of where prices finished a year ago, when the March 2018 National Bidweek Average was just $2.43.

Weather models have shown the month of March starting out strong from a heating demand perspective, but that cold is expected to soon give way to a warm pattern over the critical East Coast markets by the middle of the month.

In some ways, the outlook for March evokes a pattern similar to the full 2018-19 heating season. November got off to a roaring start, with early season demand stoking fear in the market and amid concerns over the historically lean inventories at the time. But the worst-case storage scenarios that initially stoked fear in the market and sent the winter strip skyrocketing never materialized.

In the end, winter 2018-19 proved about as intimidating as a lamb, evidenced by a March contract that limped into expiry well shy of $3, needing a robust round of late-season cold to rally to $2.855 before rolling off the board.

With that baseline, pricing locations throughout the Midwest and East posted sharp discounts in March bidweek trading, suggesting traders expected only a fleeting uplift from cold weather early in the month.

“The overall theme remains that we see one of the coldest starts to March that we’ve seen in many years, but the shift in tropical forcing patterns means that we see changes by the middle of March that are likely to bring a milder pattern to much of the nation,” Bespoke said. “There is also risk that models are showing too much cold at the surface out in the 11-15 day time frame, given the changes already seen in the upper level pattern at that point in time.

“While we have often observed models to be too fast on calling pattern changes, we do believe that, from here, risk of GWDD losses is higher compared to risk of moving colder.”

Bespoke on Friday outlined “competing factors in the near term that can keep prices from moving strongly in either direction,” including an Energy Information Administration (EIA) storage report for the week ended Feb. 22 that came in on the bearish side of expectations.

On the other hand, “current balances still remain rather tight,” with a projected end-of-season storage total around 1.1 Tcf. Data as of Friday showed a “small dip in both production and Canadian imports,” but this was countered by a dip in liquefied natural gas exports, according to the firm.

“With near-term cold likely keeping cash firm, and stronger prices for next winter, we can test the $2.85 level” for the April contract, “though with good model agreement on a shift warmer in the middle third of the month, and risk that balances loosen somewhat at these price levels, we believe any move to $2.85 or higher will prove to be difficult to sustain” without additional colder forecast trends, Bespoke said.

The EIA reported a 166 Bcf withdrawal from storage inventories for the week ending Feb. 22 that left stocks at 1,539 Bcf, 154 Bcf (9.1%) below last year and 424 Bcf (21.6%) below the five-year average. The reported draw compared with a year-ago draw of 85 Bcf and the five-year average draw of 104 Bcf. As of Thursday’s settlement, Intercontinental Exchange EIA End of Draw Index futures settled at 1.1 Tcf.

“Although it appears March will start on the colder side this year, March futures” for both natural gas and PJM Interconnection power prices stayed relatively flat during the month of February, noted Morningstar Commodities Research analyst Matthew Hong. “Even with colder temperatures, the market appears to be signaling an end to winter, though it may not feel like it to most Americans.”

The flatter March pricing in part reflects a “return to normal fundamentals in natural gas production and storage,” Hong said.

“Although Northeast production was down in January,” as of earlier in the week February production was on track to recover, “ending the month about 0.2 Bcf/d higher than the previous month,” according to the analyst.

This comes as storage inventories in the East have also returned to within the five-year average range.

“This winter weather roller coaster ride does not appear to be over, with short-term forecasts still showing some cold, while long-term outlooks appear to show an overall milder March,” Hong said. “The futures markets for both natural gas and power, however, appear to be unfazed with the inconsistency, as prices have remained somewhat range-bound since the end of January.

“Despite the risk of some additional weather-driven demand, the overall fundamentals appear to be stable enough to absorb any short-term need. Unlike the weather, which may still surprise us, prices are not pointing to a March surprise.”

Locations in Appalachia and the Southeast also posted discounts in March bidweek trading, with Transco Zone 5 tumbling $1.730 to average $3.025. Dominion South was off 8.5 cents, averaging $2.620, while Columbia Gas dropped 8.0 cents to $2.655.

While March bidweek prices sagged in the Midwest and East, it was a different story for markets in the West coming off strong demand in the month of February.

Looking in particular at the Pacific Northwest, as February drew to a close, a combination of record demand and supply constraints sent Northwest Sumas spot prices skyrocketing. Bidweek traders in the region took notice, baking in a $6.150 increase at the location to leave March prices averaging $9.865.

Nominated demand for Wednesday (Feb. 27) came in at a record 2,680 MMcf/d for that date, and it was the 18th day out of the first 27 days of February that established a new daily high for the time of year, Genscape said.

“Even without extreme cold, demand and prices would be strong,” according to the firm. As of late February, weather-normalized demand for the month was averaging 2.68 Bcf/d, “virtually 0.5 Bcf/d greater than demand at the same temperatures last February, and nearly 0.7 Bcf/d stronger than the February five-year average for weather-adjusted demand.

“Serving this demand has necessitated net imports of more than 2.5 Bcf/d, about 0.5 Bcf/d more than last February and the prior five-year average. Imports from British Columbia (BC) at Sumas are averaging just 0.7 Bcf/d, about 0.2 Bcf/d below last February due to ongoing issues with the Westcoast pipeline,” Genscape said. “To make up for this, the region is bringing in more gas from the Rockies and Alberta, and sending less gas to Northern California through Malin.”

These regional dynamics, occurring in the aftermath of the October explosion on Enbridge Inc.’s Westcoast system, showed up in bidweek prices for other locations along the West Coast, in the Rockies and in Canada.

Located on the other side of the constraints impacting southbound flows through Enbridge’s BC pipeline system, Westcoast Station 2 prices dropped C22 cents to average C$1.035/GJ in March bidweek. Elsewhere in Canada, NOVA/AECO C enjoyed stronger pricing, picking up C29 cents to average C$2.365/GJ.

“This week saw AECO spot pricing trade at a premium to Henry Hub, offering a friendly reminder how disconnected the two markets have become,” Tudor, Pickering, Holt & Co. analysts wrote in a note to clients Friday. “Thanks to Old Man Winter’s icy breath, February intra-Alberta demand has averaged nearly 7 Bcf/d, 0.8 Bcf/d above 2018 and 1.5 Bcf/d above the five-year average.”

In California, Malin climbed 52 cents to $3.945, and SoCal Citygate shot up 84 cents to $5.550, even as other locations in the region posted discounts.

It’s no secret that Southern California Gas (SoCalGas) has been dealing with supply issues of its own for some time now, and the utility has turned to the California Public Utilities Commission (CPUC) to try to find a more workable solution to manage periods of high demand, when limited pipeline imports prove inadequate. During the month of February, SoCalGas had to curtail electric generators and routinely withdrew volumes from the restricted Aliso Canyon storage facility to meet the demand on its system.

In a letter Tuesday to the CPUC, the utility urged regulators to rethink the protocol currently in place that makes Aliso — closely scrutinized ever since a high-profile leak at the facility in 2015 — a resource of last resort. The utility’s reliance on Aliso volumes this winter highlights issues the protocol creates for the market, SoCalGas said.

“These state-impose restrictions have the seemingly unintended consequence of creating market distortions by limiting Aliso Canyon’s ability to supply the market and creating market dynamics that result in higher costs for all customers by increasing demand for limited natural gas supply.”