Two weeks before the primaries in Virginia’s gubernatorial election, one of the Democrats running for the post reportedly urged property owners in Nelson County to continue their opposition to the controversial Atlantic Coast Pipeline (ACP). 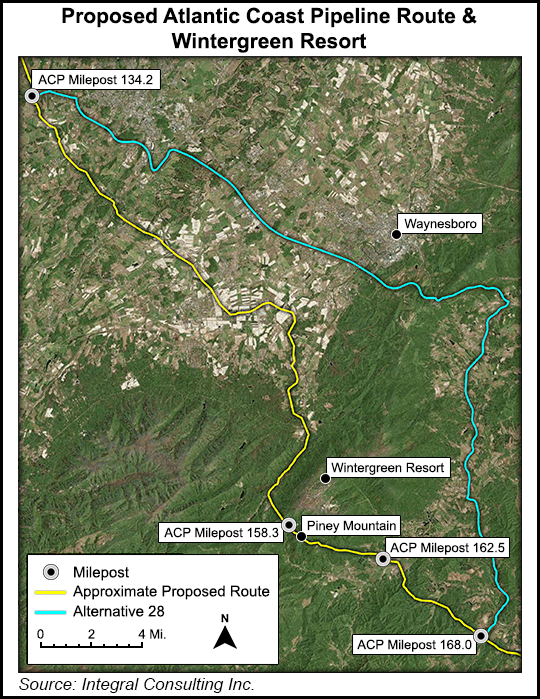 According to WVIR-TV in Charlottesville, former U.S. Rep. Tom Perriello attended Monday’s meeting of Friends of Wintergreen (FOW), a nonprofit that supports the state’s Wintergreen Resort and opposes the pipeline. Perriello reiterated his opposition to the pipeline and its main backer, Dominion Resources Inc. — a notable departure from Democratic Gov. Terry McAuliffe, an ACP supporter.

“The problem is, Dominion is a broken business model,” Perriello told the FOW crowd. Afterwards, he told the TV station that “what’s so frustrating to both conservatives and progressives in the room is the idea that this is really just about protecting monopolies at the expense of economic growth in the future.

“I think it is very clear that what’s driving [resistance to ACP] is citizen pressure, supported by candidates like myself who have been willing to stand up and refuse money from Dominion and call this what it is.”

Perriello, a Charlottesville native, formerly represented Virginia’s Fifth Congressional District but was defeated in the 2010 election. Nelson County, a municipality within the district and located along ACP’s route, has been an area of active opposition to the project.

According to WVIR, the Wintergreen Property Owners Association (WPOA) has asked its 4,000 members to vote in favor of a change to its covenants, under which utilities like Dominion would be barred from crossing the resort’s public spaces if there is no direct benefit to Wintergreen. The proposed route for ACP would cross WPOA property at the entrance to the resort.

“Working with FOW, WPOA continues to communicate with the Federal Energy Regulatory Commission and other government officials through numerous filings, reports, and intervening comments that support our concerns and opposition to the current pipeline route,” WPOA said in its May newsletter. “With the help of Friends of Nelson, FOW, Nature Foundation at Wintergreen, and others, we continue to challenge the current route in an effort to minimize the negative impact on our community.”

Another gubernatorial Democratic candidate, Lt. Gov. Ralph Northam, was invited to the FOW meeting but reportedly could not attend due to a scheduling conflict. David Turner, a spokesman for Northam, said the candidate’s position “has always been that these projects must be held to the highest environmental standards, and he maintains that position.”

The meeting comes days after the Virginia Department of Environmental Quality (DEQ) said it would not require individual water quality certifications for hundreds of individual crossings of streams and wetlands by ACP and the proposed Mountain Valley Pipeline (MVP). Rather, the DEQ said it would defer to the U.S. Army Corps of Engineers (USACE), which would review the crossings through the Nationwide Permit 12 process, under the scope of the Clean Water Act (CWA).

“The USACE’s permitting process does evaluate and review every crossing,” Turner said. He added that if the Corps “determines that a specific crossing doesn’t meet the conditions of Nationwide Permit 12, then the USACE must issue an individual permit for that crossing. DEQ will also need to issue a Virginia Water Protection permit.

“This is a rigorous regulatory process that goes above and beyond what the state has required in the past, leveraging the expertise from the USACE while requiring additional conditions to be met through an individual certification issued by the State Water Control Board.”

Last April, DEQ spokesman Bill Hayden said the department “has notified ACP and MVP that in addition to utilizing the USACE Nationwide Permit 12 for wetland and stream crossings, DEQ will be requiring individual [CWA Section] 401 Water Quality Certifications for each project.” DEQ officials have since acknowledged a miscommunication between its technical and public affairs staff over the environmental reviews.

Environmental groups have blasted the DEQ over the miscommunication and the plans moving forward, calling them inadequate.

“DEQ has authority it should use to protect Virginia waterways from the dangers of these pipelines,” said Greg Buppert, senior attorney with the Southern Environmental Law Center in Charlottesville, VA. “Hundreds of waterways are at stake and we have no confidence that the Corps’ permit is adequate for projects of this scope.”

The 600-mile, 1.5 Bcf/d ACP would run from West Virginia into Virginia and North Carolina, bringing Marcellus and Utica shale gas to satisfy power and heating demand in the Southeast. The project is slated to go into service in 2019.