Natural gas futures took one (actually two) on the chin Thursday as a larger-than-expected storage injection and an update regarding the Freeport liquefied natural gas (LNG) outage sent prices tumbling to levels not seen in months. The August Nymex futures contract plummeted $1.074 to $5.424/MMBtu. September lost $1.101 cents to land at $5.392. 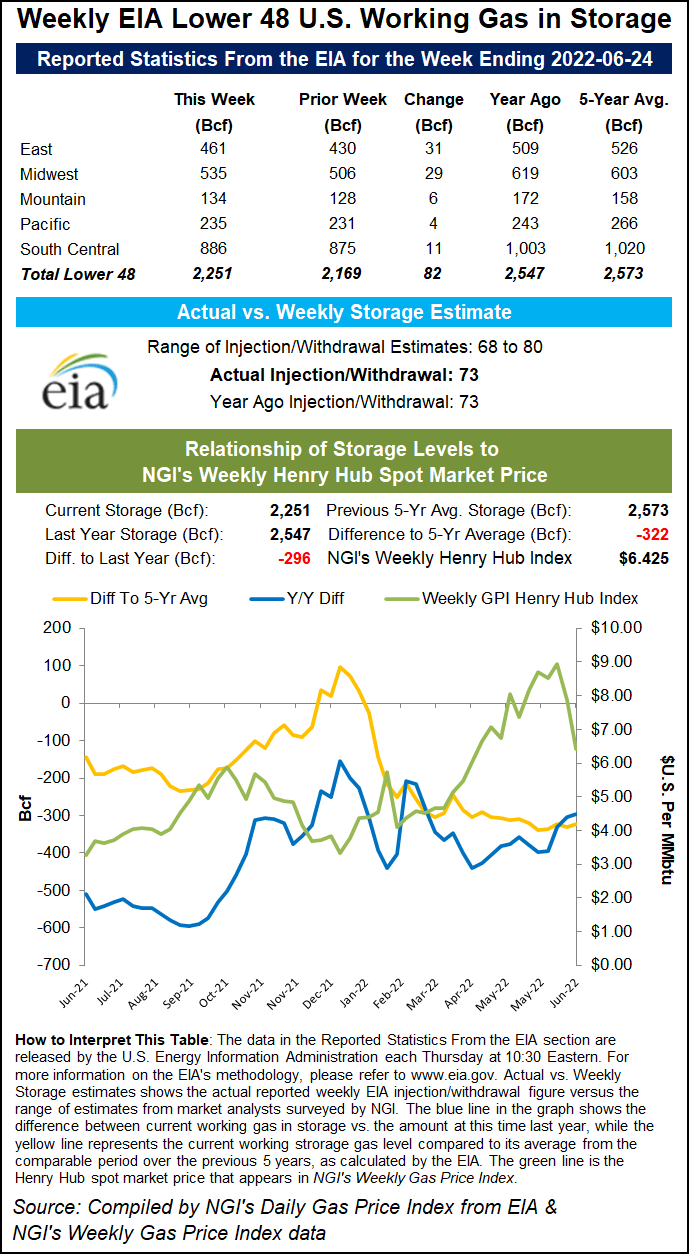 The bearish EIA surprise – the second in a row – quickly sent prices crashing lower. Within a half hour of the report, August futures had fallen as low as $5.967.

Bespoke Weather Services, which had called for a 75 Bcf injection, said the latest data seemingly confirms that more gas is getting into storage than its data and those by others is detecting.

Several market observers on The Desk’s online chat Enelyst said the East and Midwest were the biggest misses, though nonsalt facilities in the South Central region also missed the mark. They chalked up the larger-than-expected builds to production not being fully captured on intrastate pipelines, and more gas flowing from the South to the Midwest in response to the heat wave that hit the region last week.

Around midday, the gas market got knocked around again when the U.S. Pipeline and Hazardous Materials Safety Administration (PHMSA) issued a Notice of Proposed Safety Order to Freeport LNG in response to a preliminary investigation into the June 8 explosion.

In addition to the preliminary findings of the investigation, the PHMSA order outlined measures Freeport must complete before returning to service. The order did not indicate whether the project could be off longer than Freeport has suggested. The facility was expecting a return to partial service within three months, with a full restart by year’s end.

However, bears appeared to take the news and run with it, with even more aggressive selling into the close.

However, Enelyst managing director Het Shah noted that recent declines in LNG feed gas may also be more sustained in the near term, which could have weighed on prices. He said Sabine Pass is now performing well below its peak levels, which might be because of maintenance at a train. If that’s the case, feed gas volumes may hold at lower levels for the next month. Sabine volumes were also revised lower for Tuesday to 3.8 Bcf/d.

Celsius Energy pointed out that Thursday’s 16.6% decline in August futures was the fifth largest daily loss since 1994. This year is the only year to have two top 10 losses in the same year – it has three – much less two (June 14 and 30) in the same month, according to the firm.

Is More Downside Ahead?

While some market observers viewed Thursday’s sell-off as overdone, others questioned whether there could be more downside ahead, given easing supply concerns in light of recent storage data and the Freeport news.

One Enelyst participant said the market shouldn’t be surprised that a move from $4 to $9 in a matter of three months ushered in some incremental loosening. “Similarly, a move from $9 to under $6 in a matter of days will cause things to change in ways we may start to see weeks from now.”

Production also comes in with a lag, he said, and output could climb to 100 Bcf/d at some point late this year to the extent demand picks up because of prices.

Noting that 100 Bcf/d may seem a bit far-fetched, nothing seen in the market this year is being taken as a strong indicator of what suppliers think about prices in the $4-5 range, according to the participant. Likewise, “people should have taken demand destruction seriously as prices ramped. We have unexplained demand loss or supply gain. Forget what we all see and can easily model.”

With market chatter abuzz that PHMSA’s order may delay Freeport’s restart several more months, another Enelyst participant said, “if Freeport is off for that long, this is not overdone, in my opinion.”

Curry, meanwhile, said there is another 800-pound gorilla in the room that the market isn’t considering – hurricanes. “That’s a game changer. We go down decidedly if we get LNG disruptions from hurricanes.”

For now, traders with long positions have some breathing room, as salt storage facilities continue to decline. “The more space you can retain in salts, the more you can handle those LNG disruptions from hurricanes. We know we can get to 415 Bcf or so.”

Curry noted, however, that playing in the gas market is becoming increasingly difficult, with volatility likely to remain elevated. Open interest has declined in gas and oil. “It doesn’t take a lot of chips to move the market around.”

Spot gas prices plunged on Thursday amid falling cooling demand across the southern United States thanks to rain associated with an area of low pressure near the southern Texas coast.

The National Hurricane Center (NHC) said Thursday afternoon that slow development of this system is possible while the low remains over the Gulf of Mexico. It also could still become a short-lived tropical depression before moving inland. Regardless, heavy rains were possible through Saturday, according to NHC forecasters.