Executives expressed a more optimistic outlook on capital availability and commodity pricing for the oil and gas sector in the latest editions of two surveys conducted by Haynes and Boone LLP. 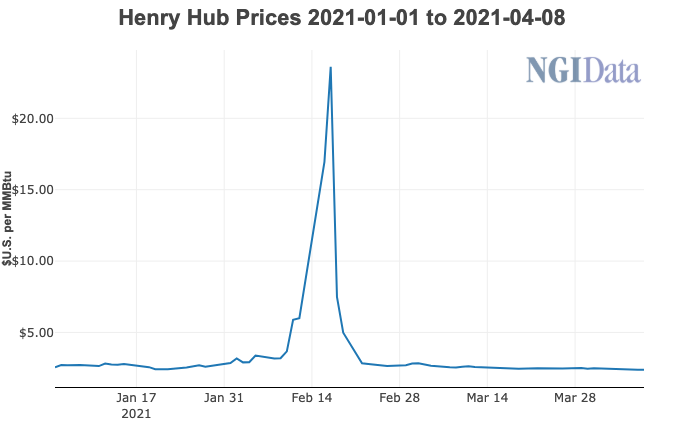 Most respondents to the law firm’s spring 2021 Borrowing Base Redeterminations Survey forecast that borrowing bases will rise by 0-10% this spring versus fall 2020.

By comparison, in the fall survey, most predicted a decline of 10-20%.

“World oil prices have improved in light of expectations that the worldwide rollout of vaccinations will help us continue to slowly emerge from the Covid-19 pandemic,” said Haynes and Boone’s Buddy Clark, who heads the firm’s energy practice group.

Although the base case average gas price is an improvement, “on a going-forward basis, the banks’ price decks for gas prices track lower than last fall’s price decks were forecasting,” researchers said.

“Until gas demand improves, it doesn’t appear that there will be any gas lift to borrowing base redeterminations,” researchers said.

The Haynes and Boone team found that, “If expectations are met near-term, oil and gas prices should recover above the banks’ spring 2021 price decks. However, the historical level of bankruptcies and significant loan losses over the last few years are still fresh in the memory of many bankers.”

A large majority of respondents to the redeterminations survey found that borrowers have hedged at least 50% of future production, in line with last year’s trend of increased hedge volumes.

“Hedging levels, which were already historically high, have gone even higher” as recent price movements have motivated both producers and their lenders to protect against the downside, Grahmann said.

The survey also found that, “The upstream oil and gas industry has settled into a new normal with respect to capital raising. Expectations regarding capital sources have stayed extremely consistent in the last three redeterminations surveys.

Asked where producers are planning to source their capital from in the next 12 months, cash flow from operations was the most common answer given at 24% of total responses. It was followed by debt from capital markets (14%), debt from banks (13%), debt from alternative capital providers (12%), equity from private equity firms (9%), monetization transactions (8%), joint ventures with private equity firms (8%), and equity from private family offices (7%).

“The most significant change is an increased use of debt from capital markets.”

Meanwhile, three oil and gas plays – the Permian Basin, the Eagle Ford/Austin Chalk formations, and the Haynesville Shale – are expected to attract the most capital over the next two years, respondents said.

“Though basin economics are the biggest driver, the political landscape is likely also a factor: Plays that involve significant federal leasing have minimal interest,” the Haynes and Boone team said.

President Biden has paused the awarding of new leases on federal property as the Interior Department conducts a comprehensive review of its federal oil and gas program.