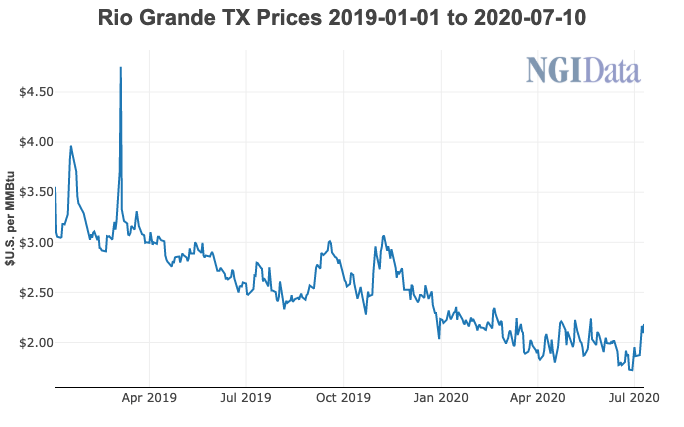 A strengthened outlook for natural gas pricing in 2021 has made the development of natural gas fields in Mexico a more attractive proposition, according to Juan Carlos Zepeda, former head of upstream oil and gas regulator Comisión Nacional de Hidrocarburos (CNH).

In a podcast interview with NGI, Zepeda highlighted the central and growing role of gas in Mexico’s power sector, citing that gas-fired plants supply more than 60% of the country’s power generation needs, a share that should continue to grow.

More than 90% of the gas consumed by power generators comes in the form of imports from the United States, Zepeda said, noting that no other country in the world is so dependent on a single country for its gas supplies.

In its latest Short-Term Energy Outlook, the U.S. Energy Information Administration (EIA) said it expects the Henry Hub spot prices to average $1.93/MMBtu in 2020 and $3.10 in 2021.

This would translate to prices of $3.50 or more in Mexico, Zepeda said, breathing new life into non-associated gas investments. Of particular interest is the prolific Burgos Basin, which contains an extension of the South Texas’ famous Eagle Ford Shale.

However, a currently swelling second wave of Covid-19 in the United States could wreak havoc on the latest supply and demand predictions.

In any event, Zepeda said CFE should follow the example of international oil companies such as Royal Dutch Shell plc and Total SA, which have increasingly focused on vertical integration via their gas and power divisions, as the molecule plays a growing role in the global power generation mix.

Zepeda said while the current government is unlikely to resume bid rounds for shallow water and conventional onshore oilfields, “I’m expecting to see at least farmouts in deepwater…which involve high risk and high capital expenditures, so I will be expecting the government to open that possibility for private investment in joint-ventures with Pemex…

The president has said he opposes “fracking,” presumably a reference to hydraulic fracturing combined with horizontal drilling, although Pemex continues to invest in unconventional E&P projects.

Because of Mexico’s dependence on U.S. gas imports and its lack of underground storage capacity, Zepeda said he expects gas prices in Mexico will continue to be tied for some time to U.S. benchmarks such as Henry Hub.

He also said that the recent instruction by Mexico’s energy ministry to Pemex and Talos Energy Inc. to draw up terms for unifying the shared Zama discovery is an encouraging sign for the country’s upstream segment.