Mexico’s economy went into quiet mode for most of the last week as the country celebrated its Dia de los Muertos holiday. Natural gas imports from the United States dropped, and pricing volatility continued to be the name of the game. 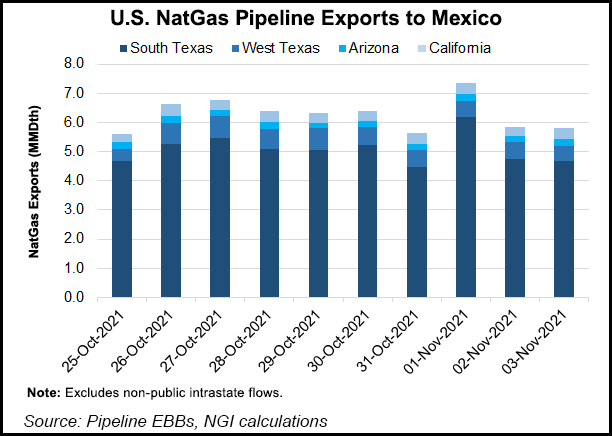 Wood Mackenzie analyst Ricardo Falcón told NGI’s Mexico GPI that low pressure systems and cooler weather in Mexico have also led to a drop in natural gas demand over the past week. Wood Mackenzie’s preliminary figures for power and industrial gas burns are around 6.3 Bcf/d so far in November, a month/month decrease of almost 4%.

“These levels are contributing to a noteworthy drop in U.S.-to-Mexico pipeline exports,” Falcón said.

Wood Mackenzie figures have pipeline imports from the United States at 5.3 Bcf/d so far in November. NGI estimates pipeline flows were 5.81 Bcf on Wednesday, the day most Mexicans returned to work.

Natural gas futures prices over the past five trading sessions have also been up and down. The December contract saw a 35.6-cent rally in Tuesday’s session after four straight losses. Colder weather appeared to be on the horizon and liquefied natural gas (LNG) feed gas demand grew stronger on renewed supply fears in Europe. December settled at $5.542/MMBtu, and January rose 33.5 cents to $5.640.

The cooler mid-November temperature outlook, recovering LNG feed gas demand and “supportive technicals” could all help to “stabilize the front month in the immediate term,” according to EBW analysts. However, “strong production flows and a lack of extreme cold may make it difficult to sustain current prices — ultimately leading to renewed downward pressure for the December contract.”

Beyond the freakish prices recorded during the Texas freeze in February, they were for the third consecutive month the highest on record since the IPGN was launched in 2017. The CRE used 352 transactions from information provided by 32 marketers to calculate the September index.

In production news, executives at state oil company Petróleos Mexicanos (Pemex) said they were aiming to up natural gas output and slash flaring to improve domestic supply and improve environmental metrics. No details were provided. The company currently flares 13% of its natural gas production.

Mexico’s Sistrangas five-day line pack average was 6.896 Bcf/d on Tuesday (Nov. 2), within the optimal line pack of 6.86-7.29 Bcf needed to guarantee sufficient pressure in the system.

Demand on the Sistrangas on Tuesday was 4.702 Bcf, down from 4.624 Bcf a day earlier. Mexico gas production fed into the system was 1.278 Bcf. Southeast production dominated this total, with 721 MMcf/d from the region injected into the pipeline system on Tuesday.

NGI forecasts a build of 68 Bcf for this week’s U.S. Energy Information Administration (EIA) report. That would easily exceed both the year-earlier injection of 27 Bcf and the five-year average 38 Bcf build. Energy Aspects issued a preliminary estimate of 66 Bcf for the upcoming report.

“Growing heating demand will continue to cut the injection rate as the heating season draws nearer, but 0.8 Bcf/d of week/week production gains will add some support to late-season injections,” the firm said. “Flows indicate Haynesville Shale output rose by 0.5 Bcf/d week/week, with Appalachia and the Gulf of Mexico each adding 0.2 Bcf/d week/week as well.”

Last week, the South Central region led all regions with a 36 Bcf increase in storage inventories, including a 21 Bcf build in salt facilities and a 15 Bcf addition to nonsalts, according to EIA. This is the region that is key to Mexico.