Imperial Oil Ltd.’s Strathcona refinery in Edmonton is looking to add up to 20,000 b/d of renewable diesel to the mix as soon as 2024, enabling emissions from Canada’s transport sector to decline by as much as 3 million metric tons/year. 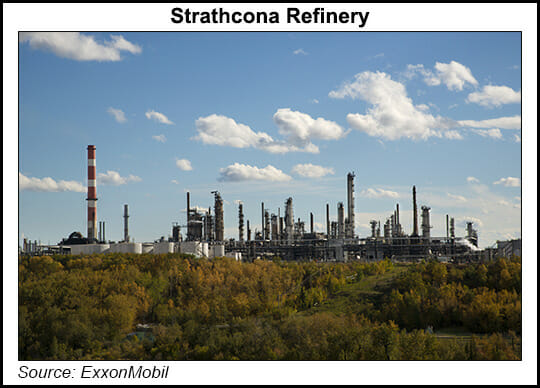 The ExxonMobil affiliate’s complex as designed would use locally grown plant-based feedstock and hydrogen with carbon capture and storage (CCS) in the manufacturing process.

“The Strathcona project is an example of how well designed policies allow us to leverage our existing global facilities for capital efficiency, utilize our proprietary catalyst technology, and bring our decades of processing experience to develop low-emission fuels.”

The renewable diesel production process would utilize blue hydrogen, which is produced from natural gas using CCS. About 500,000 metric tons/year of carbon dioxide could be captured using that manufacturing method, ExxonMobil noted. The blue hydrogen and biofeedstock would be combined with a proprietary catalyst to produce the low-carbon diesel fuel.

ExxonMobil Low Carbon Solutions, which is eyeing around two dozen projects from Texas to Qatar, has made the “broad commercialization” of CCS its initial focus, said the unit’s President Joe Blommaert. The company also is “seeing increased momentum for projects that include hydrogen and biofuels — areas that we are uniquely suited to address and advance in combination with CCS.”
ExxonMobil for years has been a vocal supporter of an economy-wide price on carbon “because it is the most efficient approach to changing behaviors and accelerating investments in low-emission technology,” Blommaert said.

“However, Canada’s Clean Fuel Regulation could be a model for other countries considering a sectoral approach. Technology-neutral, lifecycle carbon-intensity based fuels policies like the one proposed in Canada can quickly bring projects like Strathcona to scale and rapidly reduce emissions at a low cost to society.”

A final investment decision for the Strathcona renewable diesel project is to be based on government support, market conditions and economic competitiveness. The project, if it were to move forward, is expected to create around 600 direct construction jobs. Production could begin in 2024.

The Strathcona renewable diesel project is part of ExxonMobil’s strategy to provide more than 40,000 b/d of low-emissions fuels by 2025. In the United States, the company has agreed to purchase up to 5 million bbl a year of renewable diesel from Global Clean Energy to supply California markets. Chemically similar to petroleum-based diesel, renewable diesel can be blended for use in engines on the market, it noted.

Imperial, one of five Canadian firms that control 90% of the 3 million b/d Alberta oilsands industry, in June formed the Oil Sands Pathways to Net Zero with Canadian Natural Resources Ltd., Cenovus Energy Inc., Meg Energy Corp. and Suncor Energy Inc. The goal of the alliance, working collectively with the oil and gas industry and the federal and Alberta governments, is to achieve net-zero emissions from oilsands operations by 2050.