The International Monetary Fund (IMF) has joined a chorus of voices urging Mexican national oil company PetrÃ³leos Mexicanos (Pemex) to reconsider its 2019-2023 business plan, and to embrace upstream partnerships with the private sector. 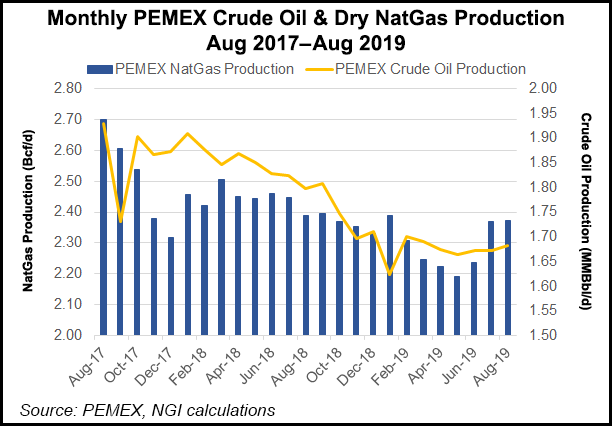 “The business plan limits cooperation with private firms in Pemex’s upstream business to service contracts, envisages investing heavily in its loss-making downstream business and lacks concrete ways to reduce operating costs,” the IMF said Friday in the preliminary findings of its 2019 Article IV mission to Mexico.

The Pemex plan calls for crude oil production to reach 2.7 million b/d by 2024, up from 1.68 million b/d reported in August. The 1 million b/d increase would bring output to levels not seen in more than a decade.

Analysts have expressed nearly uniform skepticism about Pemex’s ability to hit the production target, especially if the government does not resume upstream bid rounds or risk-sharing partnerships between Pemex and private sector operators.

“The mission recommends reconsidering these decisions as they place the onus of stabilizing Pemex squarely on the government,” the IMF said.

“Most importantly, joint ventures with the private sector remain the most promising way to replace reserves and increase production given fiscal pressures.”

Although Pemex plans to allocate $1 billion of capital expenditure to the gas-rich Ixachi field in 2020, the effect on national gas supply will be “negligible” according to Goldwyn Global Strategies LLC President David Goldwyn.

“A downgrade of Pemex to non-investment status by a second major rating agency could lead to higher financing costs and spillovers to other corporations,” the IMF said.

The multilateral organization is forecasting economic growth of 0.4% for Mexico in 2019, down from a projection of 0.9% in the July update of its 2019 World Economic Outlook.

The July figure, meanwhile, was down from an April forecast of 1.6%.

Pemex’s “financial situation remains weak, its debt is elevated, and oil production had been dropping until very recently,” the IMF said, adding that the Article IV delegation “urges restarting energy auctions and risk-sharing arrangements between Pemex and private firms.”

At his daily press conference last Thursday, LÃ³pez Obrador reaffirmed his stance that oil and gas bid rounds will not resume until contracts already awarded begin to show “results.”

In September, AMEXHI director Merlin Cochran told the senate that the 111 contracts awarded so far under Mexico’s 2013-2014 energy reform can be expected to add 500,000 b/d in total by 2027. But he added that “if Mexico does not continue exploring new areas, production will fall.”

To improve Mexico’s economic growth prospects, authorities must address regional inequality within the country, the IMF said. “Poverty and inequality have only modestly declined and have failed to do so in Mexico’s south.”

This diagnosis aligns with that of the Centro Nacional de Control del Gas Natural (Cenagas), operator of the Sistrangas natural gas pipeline network, which has stated its intentions to improve gas supply in south and southeastern Mexico.

Cenagas director Elvira Daniel Kabbaz was in the southern state of Chiapas last week for an event to gauge gas demand and promote gas infrastructure in the state.

“The objective and mandate that we received from the president of the republic is that when the administration ends, we have strategic [natural gas] storage, that we have commercial storage, and that we are able to supply natural gas in the whole country, in particular in the south-southeast,” Daniel told the gathering.