Sempra Energy’s Mexican subsidiary saw profits increase by one-third in 2Q2017 from a year ago, due in large part to the acquisition and start of natural gas pipeline operations. 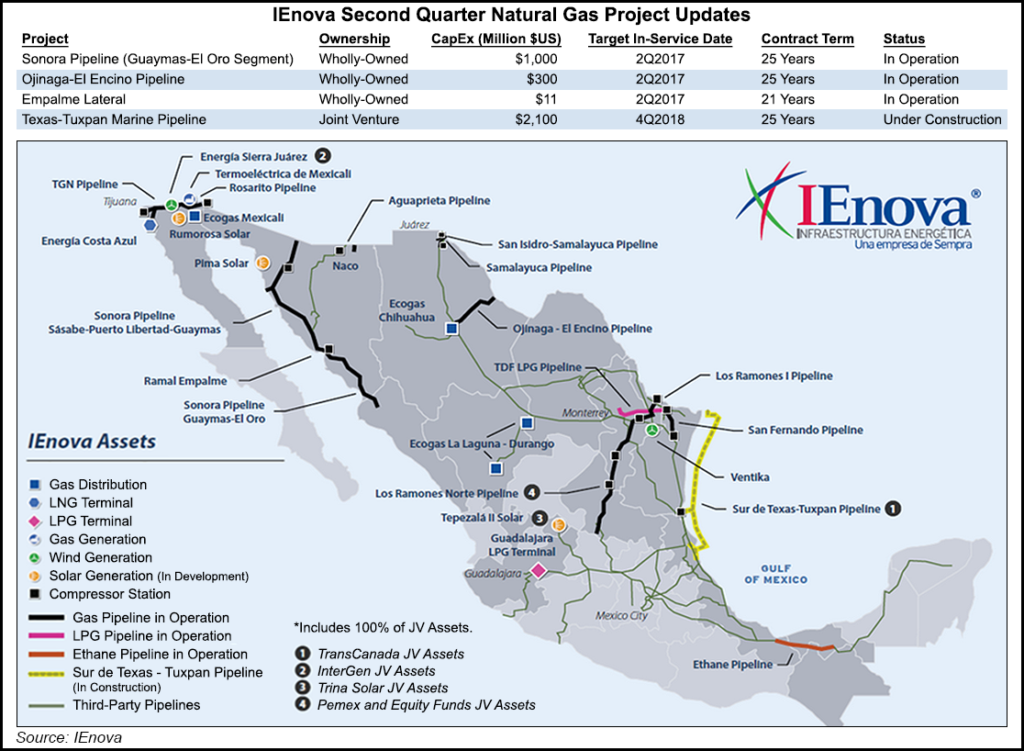 “The increase of $84 million is mainly due to $58 million from the acquisition of the remaining 50% of Gasoductos de Chihuahua on Sept. 26, 2016, and $20 million from the start of operations of the Sonora pipeline Guaymas-El Oro segment, the San Isidro-Samalayuca pipeline and the Ojinaga-El Encino pipeline,” the company said.

Electronic bulletin boards indicate roughly 34 MMcf/d of capacity into Guyamas-El Oro with no scheduled flows, and no flows yet into Ojinaga-El Encino. An IEnova spokesperson said Thursday gas is flowing on the Sonora pipeline and the Ojinaga-El Encino pipeline is packed.

Opportunities through 2025 break down into $10 billion in natural gas, $10 billion in liquids gathering/processing infrastructure, and up to $25 billion in power sector projects, both renewables and transmission, they said. IEnova plans to pick off some of the best of its opportunities to add to its existing $5 billion in 25 Mexican projects completed and under development.

Earlier this month IEnova was awarded a 20-year contract to build a liquid fuels marine terminal in Mexico on the Gulf of Mexico. IEnova expects to invest up to $155 million under the contract with the Veracruz Port Administration. IEnova plans to build and operate the facility, store and dispense liquid fuels in a market it has previewed as ripe for private investment in Mexico.

Based on current plans, the terminal would have 1.4 million bbl of capacity for gasoline, diesel and jet fuel to supply central Mexico.

IEnova, which expects operations would begin in late 2018, said final negotiations are underway to contract terminal services with third parties.

“This is a very important milestone in marking our entry into the refined product infrastructure business,” said IEnova’s Tania Ortiz Mena, executive vice president of development. “Mexico will require substantial investment in the coming years due to the increasing fuel demand and upcoming mandates for minimum inventory requirements.

“As we discussed at our analysts’ conference, we’re working on several other opportunities in the natural gas, liquids and power sectors. All of these are in line with our strategy to develop energy infrastructure under commercial terms that fit our business model.”