Natural gas consumption is expected to grow slowly over the next three years, limited by Russia’s war in Ukraine and the turmoil it’s caused for global energy markets, according to the International Energy Agency (IEA). 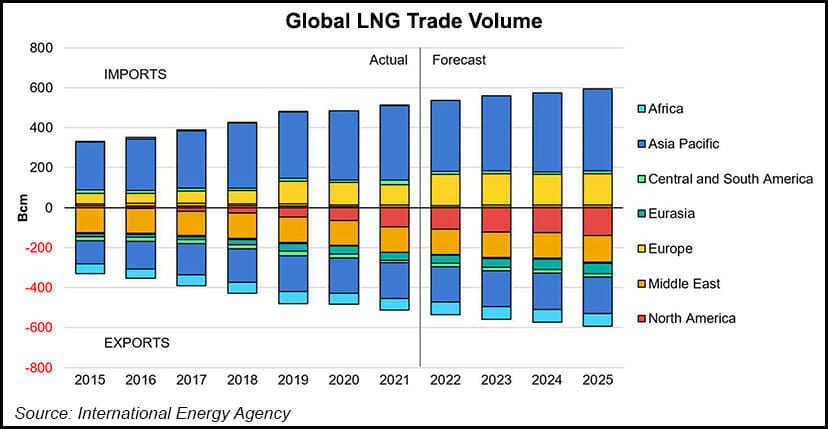 Russia has limited exports to its largest buyers in Europe, which has helped to push natural gas prices to record highs. The disruptions have reduced available supplies, depressed demand and forced some price-sensitive gas users to switch to coal and oil.

“The turmoil is damaging natural gas’ reputation as a reliable and affordable energy source, casting doubts about the role it was expected to play in helping developing economies meet rising energy demand and transition away from more carbon-intensive fuels,” IEA said.

The global energy watchdog said in its latest quarterly gas report that it still expects natural gas consumption to contract slightly this year. Global gas demand is expected to rise by 140 billion cubic meters (Bcm) between 2021 and 2025, according to the report. That’s less than half the 370 Bcm forecast previously and smaller than the 170 Bcm increase recorded last year.

IEA said its downward revision is largely attributed to weaker economic activity and less switching from coal or oil to gas.

“Russia’s unprovoked war in Ukraine is seriously disrupting gas markets that were already showing signs of tightness,” said IEA’s Keisuke Sadamori, director of energy markets and security. “We are now seeing inevitable price spikes as countries around the world compete for LNG shipments, but the most sustainable response to today’s global energy crisis is stronger efforts and policies to use energy more efficiently and to accelerate clean energy transitions.”

The Asia-Pacific region is expected to account for half of forecasted growth in global gas demand through 2025. The quarterly gas market report’s base case also assumes that Russian pipeline gas exports to the European Union would fall by more than 55% between 2021 and 2025. It also considers an accelerated case in which they fall by more than 75%.

IEA also noted that LNG export capacity additions are poised to slow down over the next three years as curtailed investment plans during a period of low prices in recent years and Covid-19 construction delays are to blame.

“This raises the risk of prolonged tight market conditions,” the agency said. “While there has been a recent surge in LNG investment decisions, the resulting infrastructure will not be operational until after 2025.”

LNG is still seen as the primary driver of the global gas market in the coming years. Global trade of the super-chilled fuel is projected to reach 594 Bcm by 2025, up 17% from 2021 levels. That rate translates to average annual growth of just under 4%, or below the 7% annual average increase from 2017-2021.

Import growth is expected to be led by Europe, which IEA estimates could boost LNG intake by 51% from 2021-2025 as the continent weans itself off Russian pipeline imports.

As a result, IEA said Europe is set to account for more than 60% of net global LNG import growth, while Asia is expected to increase imports by 11% over the same period.

LNG export growth is dominated by North America, IEA said, which is on track to increase LNG production by 46%, or by 44 Bcm. Projects in Canada, Mexico and the United States account for 54% of LNG growth globally from 2021-2025.

Russia is expected to have the second largest LNG output growth over the period. IEA projects exports from the country to increase by 28%, or 11 Bcm in that time.