Worldwide energy sector employment has topped pre-pandemic levels, and the workforce rebound has been strongest outside of fossil energy sectors, according to the International Energy Agency (IEA). 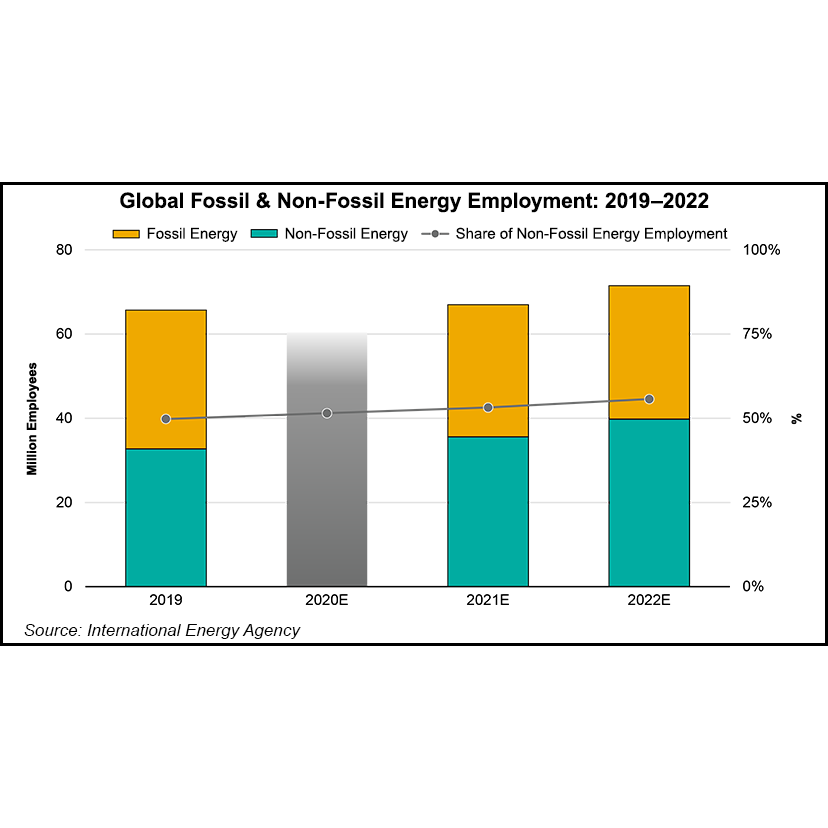 In its inaugural World Energy Employment Report, Paris-based IEA found that more than 65 million people hold energy-related jobs globally. The study also concluded that more than 50% of energy jobs are outside the fossil fuel sectors, with more than two-thirds linked to building new projects and manufacturing related technologies.

“Countries around the world are responding to the current crisis by seeking to accelerate the growth of homegrown clean energy industries,” said IEA’s Fatih Birol, executive director. “The regions that make this move will see huge growth in jobs.”

Though the oil and gas industry has experienced “an upswing in employment” since the waning of the Covid-19 pandemic, it “has yet to fully recover,” IEA researchers said. They cited new projects under development, particularly tied to liquefied natural gas infrastructure, as noteworthy drivers of oil and gas job growth.

“The energy sector is set to see its fastest employment growth in recent years in 2022, however high input costs and inflationary pressures are adding to hiring and supply chain challenges already present in some regions and subsectors, such as solar, wind, oil, and gas,” said analysts.

IEA researchers expect measures such as the Inflation Reduction Act to “continue to add to new hiring demand and to shifting the status-quo of global energy supply chains.”

Analysts also determined that about 45% of energy workers are in high-skilled occupations, compared to 25% across the economy.

“This share is even higher for jobs in research and development for new energy innovations, many of which are set to grow rapidly to 2030,” researchers said, adding that a shortage of skilled workers would prevent new technologies from being scaled up.

“Establishing market strength in these segments relies on new training and certification” and could be a focus of industry and government initiatives, they noted.

In addition, the study’s authors said that workers in fossil energy sectors hold many skills that could be transferable to emerging alternative energy sectors.

“Fossil fuels employ almost 32 million globally today,” they said. “Some companies are transferring their workers to low-carbon segments internally to retain talent, and allow for flexibility to shift workers between different business segments as needs arise.”

Singling out the coal industry’s workforce, which has “seen consistent declines since 2015,” researchers also noted that skill transferability is not always an option. They said “ensuring a just transition for affected workers is a growing focus for policy makers in many regions…”

About one-third of the energy jobs in IEA’s report cover fuel supply, including gas, oil, coal and bioenergy. The power sector – generation, transmission, distribution, and storage – accounts for another third of jobs. Energy end users, notably those in vehicle manufacturing and energy efficiency, represent the remainder.

IEA analysts found that the Asia-Pacific region is home to more than 50% of energy employment. Much of the region’s energy jobs are clustered in China, which alone accounts for 30% of the world’s energy workforce, said researchers.

They noted that every IEA scenario considered in the study showed that “clean energy employment is set to grow, outweighing declines in fossil fuel jobs.”