Although global oil demand is expected to fall by a record 8.1 million b/d in 2020 because of Covid-19, 2021 should be a much different story, the International Energy Agency (IEA) said Tuesday. 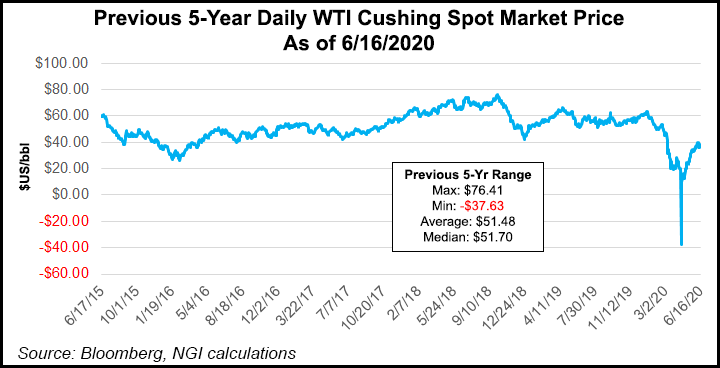 In its June Oil Market Report (OMR), the global energy watchdog said it expects global oil production to fall by 7.2 million b/d in 2020, before recovering by 1.8 million b/d in 2021, assuming full compliance by the Organization of the Petroleum Exporting Countries and its allies, aka OPEC-plus, with coordinated production cuts.

However, this modest recovery “comes nowhere close to meeting the forecast recovery in oil demand of 5.7 million b/d, even considering the need to draw down surplus stocks that built up in 2020,” researchers said.

“That suggests that the market may present producers with an opportunity to ramp up more quickly than dictated by current OPEC-plus policy or U.S. and other non-OPEC production could recover more strongly than forecast.”

Over the shorter-term, however, the outlook is less bullish for U.S. production, researchers said.

In May global production fell by nearly 12 million b/d versus April, researchers said, driven by the record OPEC-plus cuts, as well as “extensive shut-ins by U.S. producers.”

“Put simply, the Covid-19 pandemic has created the biggest shock to the global energy system since at least World War II, with the drop in energy demand this year set to dwarf that experienced after the 2008 financial crisis,” Turk said.

Although benchmark crude prices reached their highest point in three months during early June on recovering demand and sharp supply cuts, higher West Texas Intermediate (WTI) prices will be needed to support a meaningful recovery in U.S. oil output in the wake of the pandemic, according to IEA.

“The recent improvement in oil prices that saw WTI trading for a few days close to $40/bbl is not enough to allow a significant increase in U.S. output, which in June is estimated to have fallen to 10.5 million b/d, down by 2.4 million b/d from a record high seen in November,” the OMR authors said.

IEA does not foresee oil demand fully recovering from the current downturn until at least 2022, due to the expectation of sustained downward pressure on jet fuel and kerosene demand.

“In the meantime, high crude and product stocks will limit the scope for producers in many countries to sell more to refiners,” researchers said. U.S. commercial crude stocks have risen by about 1 million bbl year-to-date and currently sit at a record highs, according to the Energy Information Administration.

IEA raised its forecast for 2020 oil demand by 500,000 b/d versus the forecast in May to 91.7 million b/d because of stronger than expected deliveries during the Covid-19 lockdown. Oil demand in China recovered sharply in March-April, and in India during May.

Researchers warned, however, that “world economic growth remains highly uncertain as countries emerge from lockdowns at different paces and in some countries the number of Covid-19 cases remains high.”

IEA is optimistic about the final half of 2020 as far as the global economy.

“For the second half of 2020, we expect a strong rebound in world economic activity as lockdowns are eased,” researchers said. “A total of 46 countries eased Covid-19 lockdown measures between the middle of May and the middle of June, freeing an additional 900 million people.”

Oil traders have already priced in the prospect of a second wave of Covid cases, according to Rystad Energy’s Bjornar Tonhaugen, head of oil markets.

“The question is what happens next,” Tonhaugen said Tuesday. “Now that a return of the pandemic is a closer possibility, traders wonder if we are likely to see the same global lockdowns, if travel restrictions will be reinstated and industrial activity reduced.

“If the world treats a second Covid-19 wave like in the first half of the year, then we are in for a demand reduction that was not in the initial planning.”

Another important signpost will be an OPEC-plus production cut compliance meeting scheduled for Thursday (June 18), Tonhaugen said. Even if no decision is made on cuts, “it will be very indicative of the mood within OPEC-plus” and of the cartel’s patience for partial compliance by members of the group.

The IEA team said OPEC-plus achieved production cuts of 9.4 million b/d in May versus April, meaning a compliance rate of 89% to its pledged cuts of 9.7 million b/d.

Global gas fundamentals are expected to tighten considerably this winter and over the long term, but U.S. liquefied natural gas (LNG) could face another painful summer in which cargo cancellations mount as early as May. In a research note released Monday, Raymond James & Associates Inc. analysts said the continued ramp-up of the Chinese economy,…