Although oil production in Mexico has begun to inch upward after years of steady decline, “the timing could not be worse,” according to the International Energy Agency (IEA). 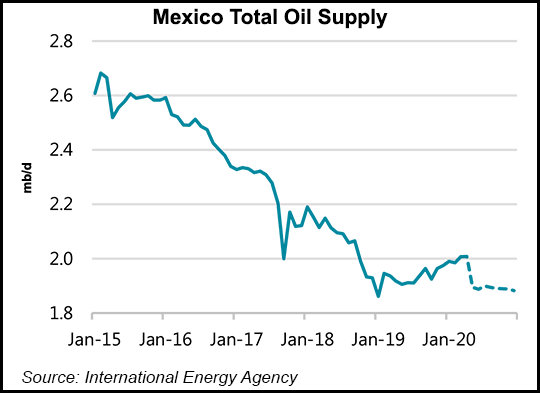 Citing global Covid-19 containment measures that have brought mobility “almost to a halt,” IEA said Wednesday in its April Oil Market Report (OMR) that it expects year/year (y/y) global crude demand to fall by a record 9.3 million b/d in 2020 to 90.5 million b/d after nearly a decade of growth.

Mexico refused to accede to a 400,000 b/d production cut assigned to it by the Organization of the Petroleum Exporting Countries (OPEC) as part of a multilateral agreement to balance the market, instead committing only to slash production by 100,000 b/d.

“With the average price for Mexican crude falling recently to around $18/bbl, the development prospects for new fields are reduced and production declines are likely to resume,” IEA said in the report, adding that national oil company Petróleos Mexicanos (Pemex) “might struggle to maintain its upstream budget, which envisaged a 20% increase in spending in 2020 to $10 billion.”

On the bright side, IEA said that Pemex’s average production cost in 2019 was $14.20/bbl, and that “some fields, such as Teekit, Ixachi and Mulach, boast operating costs as low as $4.80/bbl.”

Researchers at Welligence Energy Analytics have argued that Pemex should slash its 2020 capital budget by 70% and focus only on the profitable fields in its portfolio, in line with other national oil companies (NOCs) in Latin America and elsewhere.

This appears unlikely, however, since President Andrés Manuel López Obrador has largely based his energy policy on restoring Pemex to its former glory by increasing output regardless of the macro environment.

IEA noted that Pemex has hedged around 15% of its 2020 crude production at a strike price of $49/bbl for Mexico’s flagship Maya heavy-sour grade, and that the federal government has hedged more than 40% of production at the same price.

IEA projected that global April oil demand would fall by 29 million b/d y/y, to a level not seen since 1995.

For the second quarter of 2020, IEA sees demand falling by 23.1 million b/d from the year-ago period. Amid a gradual second half 2020 recovery, the global energy watchdog expects December demand to be 2.7 million b/d lower than in December 2019.

Following the agreement by OPEC and its allies to cut supply by 9.7 million b/d during May and June from an agreed baseline level, IEA expects global supply to fall by a record 12 million b/d in May versus April.

“Additional reductions are set to come from other countries with the U.S. and Canada seeing the largest declines,” researchers said, forecasting that full-year output for countries that are not part of OPEC, including the United States, could fall overall by 2.3 million b/d in comparison to 2019.

“That is not only a sharp reversal of the recent growth trend, but also of our earlier forecast that envisaged gains of more than 2 million b/d this year,” the report’s authors said. “Those taking part in the OPEC-plus deal account for 1.3 million b/d of the 2020 reduction, but declines from the U.S. and others accelerate through the year so that by 4Q20 total non-OPEC output could be 5.2 million b/d below the 4Q19 level.”

Global upstream investment is now expected to fall 32% y/y to $335 billion, IEA researchers said, with savings “set to come from reduced activity levels, delays to the sanctioning of new projects and an even greater focus on cost control. However, the scope for the latter may be limited given that upstream costs are estimated to already be 25% below 2014 levels.”

U.S. independents as a group have already slashed 2020 spending guidance by an estimated 30-40%, IEA said, while upstream investment from the majors is expected to fall by about 20%.

NOCs “may not be subject to the same investor pressures but are important contributors” to their countries’ fiscal revenues, researchers said, adding, “While Mexico reiterated its commitment to oil production and investment plans, the downgrading of Pemex’s credit rating by ratings agencies may hamper its ability to achieve these goals.”

OPEC offered a less pessimistic view of demand in its April Monthly Oil Market Report Thursday, forecasting a y/y contraction of about 6.8 million b/d for 2020.

For 2Q2020, OPEC sees a decline of around 12 million b/d, with April seeing the most severe plunge at 20 million b/d.

For Organization for Economic Cooperation and Development (OECD) countries, OPEC is now expecting demand to fall by 4 million b/d while non-OECD demand is projected to shrink by 2.9 million b/d.