Recently and soon-to-be completed infrastructure will allow natural gas imports to Mexico from the United States to grow by an estimated 10% over the 2020-2024 period, the International Energy Agency (IEA) said Monday. 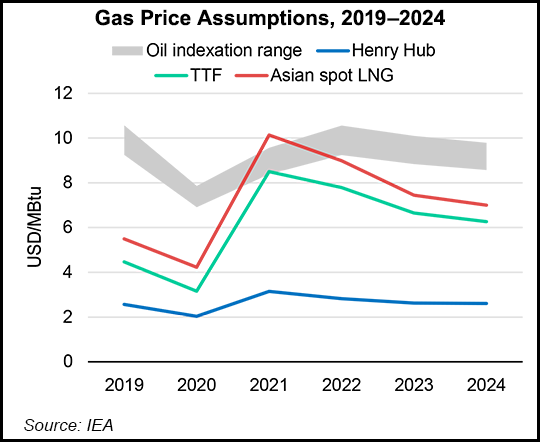 Gas flows via pipeline to Mexico swelled by 45% between 2016 and 2020, and rose 15% year/year during the first half of 2021, researchers said in IEA’s latest quarterly gas market report.

The 1H2021 growth occurred despite a temporary decline in February due to Winter Storm Uri.

Researchers said the growth in U.S. gas imports “more than compensated for the decline in domestic production” of gas in Mexico.

They added that the commissioning of new pipelines on both sides of the border has eased access to the Mexican market for Permian Basin producers.

They cited recent capacity additions such as the 472 MMcf/d Samalayuca-Sásabe pipeline, which started commercial operations in January, as well as the pending Tula-Villa de Reyes pipeline (886 MMcf/d), which is due to enter service this year.

On the U.S. side, the 2.1 Bcf/d Permian Highway Pipeline “is contributing to reducing gas flaring and supporting exports to Mexico,” researchers said.

IEA expects North American gas demand to grow at an average of 1% annually during the 2020-2024 period, researchers said, noting, “2021 does not mark a full recovery to 2019 consumption levels as higher prices hamper U.S. gas-fired power generation to the benefit of coal.”

Gas demand in Mexico is expected to grow by 1.3% annually over the span, “as growth in gas-fired generation slows and increases in industry-related uses are partially offset by declining needs from the energy sector on lower domestic production.”

The oil sector is a major consumer of natural gas in Mexico, accounting for 21% of demand on the Sistrangas national pipeline grid, according to operator Cenagas. However, national oil company Petróleos Mexicanos (Pemex) has struggled to maintain production in recent years.

IEA researchers said they expect Mexico’s gas output to continue declining through 2024, “although at a more moderate pace than in previous years.”

IEA noted that the displacement of liquefied natural gas (LNG) imports to Mexico by pipeline gas from the United States contributed to a nearly 50% y/y decline in LNG imports to North America as a whole during the first half of 2021.

As for LNG export projects, IEA said it expects a tentative recovery in sanctioned projects following last year, when final investment decisions slowed to a trickle.

Researchers noted that the 4.5 Bcm (3.25 million metric tons)/y Energía Costa Azul phase one export plant on Mexico’s Pacific coast was the only liquefaction project sanctioned in 2020, after 100 Bcm of projects were greenlit in 2019.

A second phase under development would add 12 million metric tons/y of capacity. Developer Sempra also is exploring a second LNG export project for Mexico’s Pacific coast, at the port city of Topolobampo in Sinaloa state.

IEA expects annual spend on liquefaction projects to average $24 billion over the 2020-2024 period, 13% lower than in the preceding five years.

Globally, thirst for natural gas is set to rebound sharply this year and continue rising into 2024, in part as U.S. export capacity grows, researchers said.

“The rebound in gas demand shows that the global economy is recovering from the shock of the pandemic and that gas is continuing to replace more emissions-intensive fuels,” said IEA’s Keisuke Sadamori, director of Energy Markets and Security.

“But stronger policies need to be implemented to put global gas demand on a path in line with reaching net-zero emissions by 2050 while still fostering economic prosperity. These include measures to ensure gas is used more efficiently.”

Sadamori said at the same time, “the gas industry needs to significantly step up efforts to shift to cleaner and low-carbon gases — and to act quickly and effectively to address needless methane emissions.”

The growth in the world’s gas supply is forecast to come in part because of investments in U.S. production, which is used to supplement LNG export capacity.

The “contribution of LNG to ensuring flexible and secure supplies, especially from the United States…accounts for the large majority of additional LNG capacity to be commissioned in the coming three years,” the IEA team said.

“Robust growth of the LNG carrier fleet will also make supplies more adjustable, with current order books representing a 25% increase in the vessel count in the next two to three years.”