Global energy demand could plunge 6% this year, including a 5% drop for natural gas, marking the steepest declines in 70 years, the International Energy Agency (IEA) said in a new report Thursday. 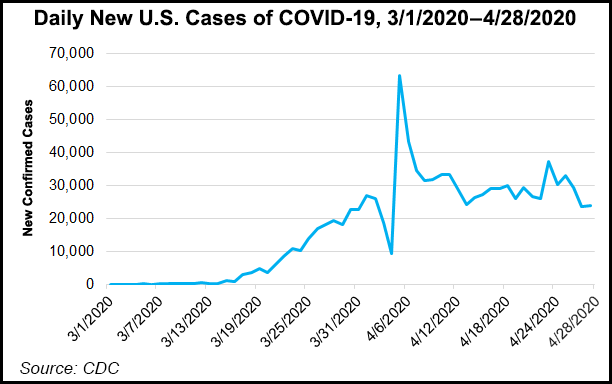 The projected overall energy tumble — hastened by falloff in commercial and industrial demand as 4.2 billion people around the world are living in some form of lockdown to slow the spread of the coronavirus — would dwarf by seven-fold the drop caused by the 2008 financial crisis.

“This is a historic shock to the entire energy world,” IEA Executive Director Fatih Birol said. “Amid today’s unparalleled health and economic crises, the plunge in demand for nearly all major fuels is staggering, especially for coal, oil and gas.

“It is still too early to determine the longer-term impacts, but the energy industry that emerges from this crisis will be significantly different from the one that came before,” he added.

The natural gas decline would end 10 years of uninterrupted growth, and it would mark the largest recorded year-on-year drop in consumption since natural gas demand developed at scale during the second half of the 20th century, the IEA said in its Global Energy Review.

The IEA expects 2020 electricity demand to fall 5%, marking the largest decline since the Great Depression and driving the downward pressure on natural gas.

Coal demand could decline by 8% this year, largely because of reduced electricity needs. Oil demand could drop by 9%, returning consumption to 2012 levels.

The decline in natural gas “is less than the anticipated fall in oil demand, reflecting the fact that natural gas is less exposed to the collapse in demand for transportation fuels,” said IEA researchers. “But it nonetheless represents a huge shock to a gas industry that is used to robust growth in consumption.”

As earnings season got underway in April, energy company executives reported pullbacks in demand and planned investments that generally align with the IEA’s bleak outlook. Midstream transportation giant Kinder Morgan Inc., for example, slashed capital expenditures for expansion by $700 million in response to what CEO Steven Kean, speaking on an earnings call, labeled a “crushing” collapse in demand.

The collective plummet in energy use projected by the IEA would drive down the world’s carbon dioxide emissions by 8% this year, a decline six times greater than in 2009, when the fallout from the financial crisis crippled the global economy. The projected rate of decline for this year would be unprecedented and about twice that of all declines in emissions since World War II.

The projections assume a deep recession between April and June, with shelter-in-place and social distancing measures gradually loosening over the summer months, followed by a slow economic recovery.

Should the global economy gather momentum faster than anticipated, the IEA said overall energy demand loss could narrow to 3.8%. For natural gas, the drop could be about 2.7%.

The only increase in demand this year is likely to develop in renewables, IEA said, because of low operating costs and preferential access to many power systems.

Recent growth in capacity, along with new wind and solar projects coming online in 2020, could also boost output.

Lockdown measures are propelling the shift to low-carbon sources of electricity, including nuclear, hydropower, wind and solar, the report said. After taking the lead for the first time in 2019, low-carbon sources this year could reach 40% of global electricity generation — 6 percentage points ahead of coal.

“This trend is affecting demand for electricity from coal and natural gas, which are finding themselves increasingly squeezed between low overall power demand and increasing output from renewables,” said researchers. “As a result, the combined share of gas and coal in the global power mix is set to drop by 3 percentage points in 2020 to a level not seen since 2001.”

Natural gas consumption had eased early in 2020, prior to the severe coronavirus impacts in major markets, largely because of mild temperatures in the northern hemisphere, IEA noted. In the United States, 1Q2020 demand fell by an estimated 4.5% from a year earlier, pushed down by an 18% drop in residential and commercial demand.

“At that time, however, the United States was the only major producer and consumer of natural gas in the world,” IEA said. “Now gas is a global commodity accounting for well over 20% of global primary demand.”