An Interior Department request to toss or transfer a challenge to an Obama-era greater sage grouse habitat management plan that would reduce lands available to oil and natural gas drilling has been dismissed for a second time by an Idaho federal judge. 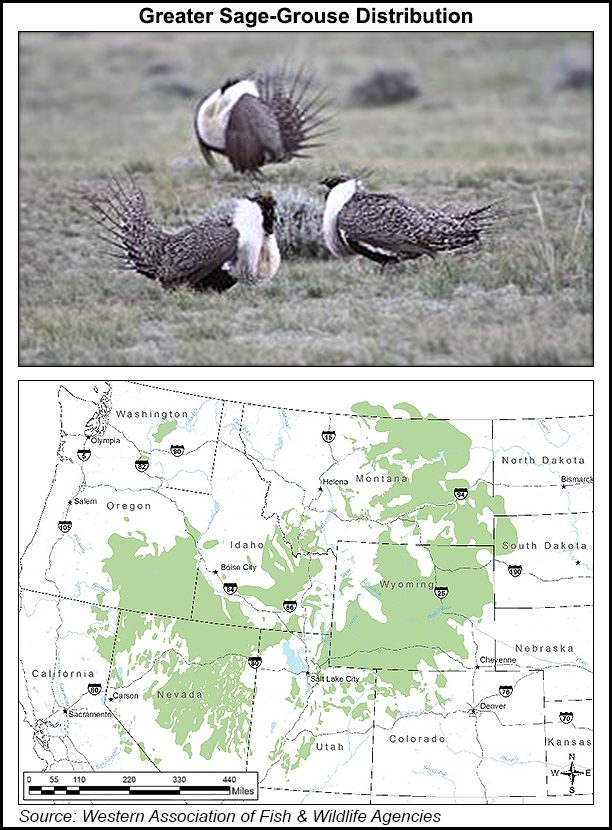 The Interior’s Bureau of Land Management (BLM) and U.S. Forest Service (USFS) have continued to challenge a 2015 resource management plan (RMP) enacted by the Obama administration, which remains in effect as court challenges continue.

The Trump administration’s Interior Department had finalized a revamped ruling in March that would cover nearly 60 million acres of sagebrush steppe, which is grouse habitat, in Northern California, Colorado, Idaho, Nevada, Oregon, Utah and Wyoming.

However, court challenges by environmental groups have prevented the revised RMP from being enacted.

BLM and the USFS asked the U.S. District Court for the District of Idaho to evaluate whether the RMP challenge should be split up and heard in several states. District Judge B. Lynn Winmill, who dismissed the argument, previously rejected a similar request.

“Transferring these cases to various states would require plaintiffs to make duplicative arguments and courts to render duplicative, and perhaps conflicting, decisions,” Winmill wrote. “The court did not agree with intervenors that circumstances have changed since the court denied the government’s earlier motion to sever and transfer.”

The Interior agencies also argued that federal lands are “real property,” which exempts them from being heard in a “home venue,” or in one state only. Winmill rejected that argument too, noting real property includes items like title petitions, not federal laws that include the National Environmental Policy Act and the National Forest Management act. Thus, the venue in Idaho’s district court “is proper here.”

Environmental groups requested a temporary injunction to halt the revised RMP as the case is considered. Winmill’s decision would appear to allow the district court to now consider the merits of the case.

The Center for Biological Diversity’s Michael Saul, a senior attorney for the environmental advocacy’s public lands program, said the court should consider the entire scope of how sage grouse are managed by federal authorities.

“Several of the core claims involve cross-cutting legal violations that implicate multiple BLM and Forest Service plan amendments in multiple states,” he said. “Failure to consider cumulative effects on sage grouse, failure to consider climate change, all of these are claims that don’t involve a single resource management plan, but rather the agencies’ failure to do a rangewide analysis of how all these plans work together.”