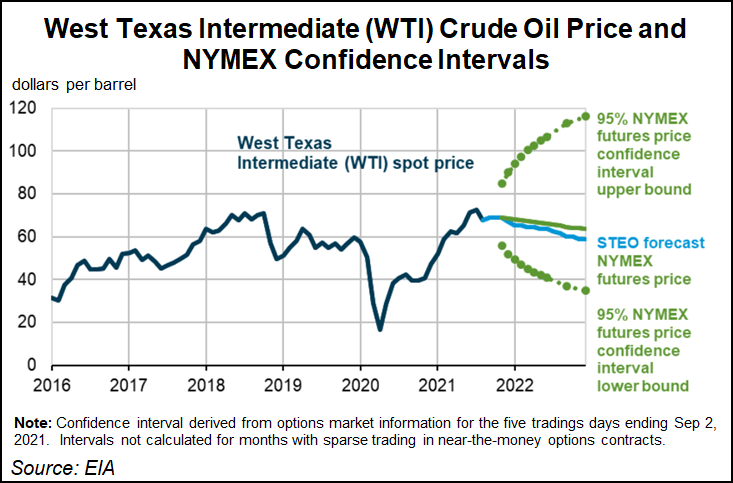 Production for the week ended Sept. 3 dropped to 10.0 million b/d from 11.5 million b/d during the prior week, according to EIA’s Weekly Petroleum Status Report. Ahead of Ida, output was already more than 1.0 million b/d below the 2020 peak reached last March before the coronavirus pandemic.

Rystad Energy analyst Nishant Bhushan said refinery demand is actually bouncing back as power is restored, but producers are not able to keep up. The output recovery “has been sluggish” and Ida’s impact on oil production in the Gulf of Mexico (GOM) could “go as high as 500,000 b/d” for all of September, Bhushan said. “Ida’s impact has already surpassed that of Hurricane Katrina.”

More than three-fourths of U.S. oil production in the GOM remained offline at midweek, according to the Bureau of Safety and Environmental Enforcement. That estimate came in 10 days after Ida barreled through Louisiana and Mississippi before moving up the East Coast and delivering flooding rains to New York City and other major markets.

Overall petroleum demand for the Sept. 3 week, meanwhile, dropped 13% from the final full week of August, though national consumption of motor gasoline ticked up modestly from already robust levels. Demand for the week ended Aug. 27 reached a 2021 high, lifted by increases in jet fuel and distillate oil consumption along with steady demand for motor gasoline. Demand has jumped through the summer months amid coronavirus vaccine rollouts.

With demand trends stronger than output, even after accounting for Ida, concerns are weighted to the supply side of the equation. At 423.9 million barrels, U.S. oil inventories are about 6% below the five-year average, EIA data show.

Analysts at ClearView Energy Partners LLC, however, said a late-summer spike in both gasoline prices and cases of the coronavirus Delta variant pose potential threats to demand this fall.

Prices at the pump this week are up more than 40% year/year, according to AAA. The seven-day average of daily new virus cases reached 152,000 on Wednesday, Johns Hopkins University data showed, an increase of 11% from the prior week and the highest level since January. The ClearView team said most states are leery of imposing new travel restrictions, but should case counts worsen further, attitudes could shift.