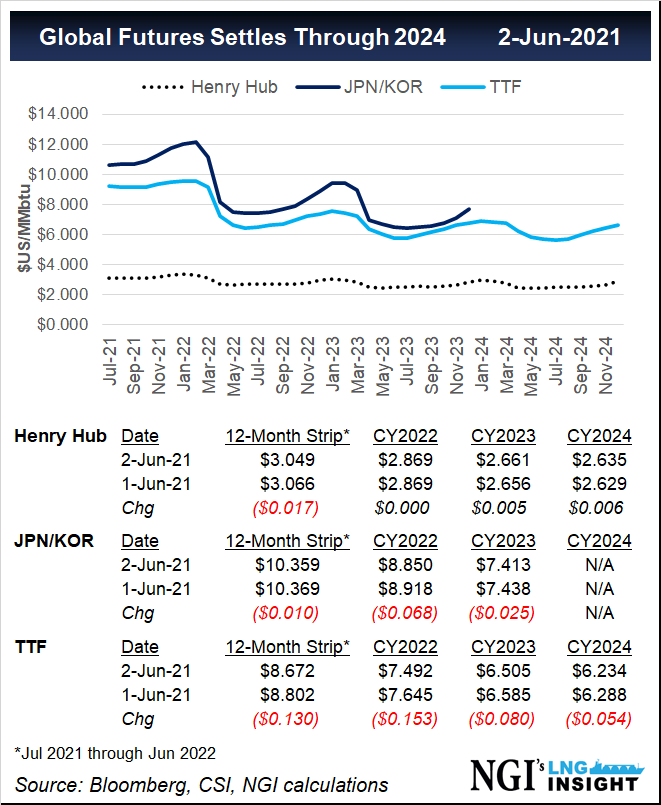 Dutch Title Transfer Facility (TTF) futures achieved record open interest of about 1.94 million contracts on May 26, representing a 21% increase year/year, according to ICE. The benchmark earlier in May had previously set a record of 1.93 million contracts, for a year/year increase of 20%.

“Natural gas has become a global market and the record levels of open interest and strong trading activity in TTF and JKM LNG futures reflect how these contracts are at the forefront of global natural gas price formation,” said ICE’s Gordon Bennett, managing director, Utility Markets. “The increased utilization of JKM by participants in East Asia is a key milestone” in the liquefied natural gas (LNG) market’s maturity, “and reinforces the position of the ICE JKM contract as a key benchmark for natural gas in the region.”

“This contract is becoming increasingly popular because it allows market participants to trade TTF in the same currency (US) and unit of measurement for energy (MMBtu) as the other globally relevant gas hubs, Henry Hub and JKM LNG,” ICE said.

The exchange also noted an 83% growth in the number of participants trading TTF from 2016 to 2020. Participants based outside of Europe have grown by 164%, with the biggest growth by traders based in the United States.

In addition, the average daily volume (ADV) in TTF futures and options has grown more than 40% on average every year since 2016, ICE noted. To date, ADV has reached 155,000 contracts, 5% higher versus the same period in 2020.

“The strong growth in trading activity and participation in the ICE TTF contract reflects how TTF is being used as a global gas benchmark,” ICE said.

Meanwhile, Platts Japan-Korea Marker (JKM) LNG futures reached record open interest of 108,210 contracts on May 13, growing 10% year/year. At the same time, ADV in JKM LNG futures and options so far this year amounts to 3,800 contracts, an increase of 14% versus the same period in 2020.

The number of participants trading JKM LNG futures has increased 25% since May 2020, “with a significant contribution to growth coming from participants based in East Asia, a region considered to be the largest LNG-importing region in the world,” according to ICE.