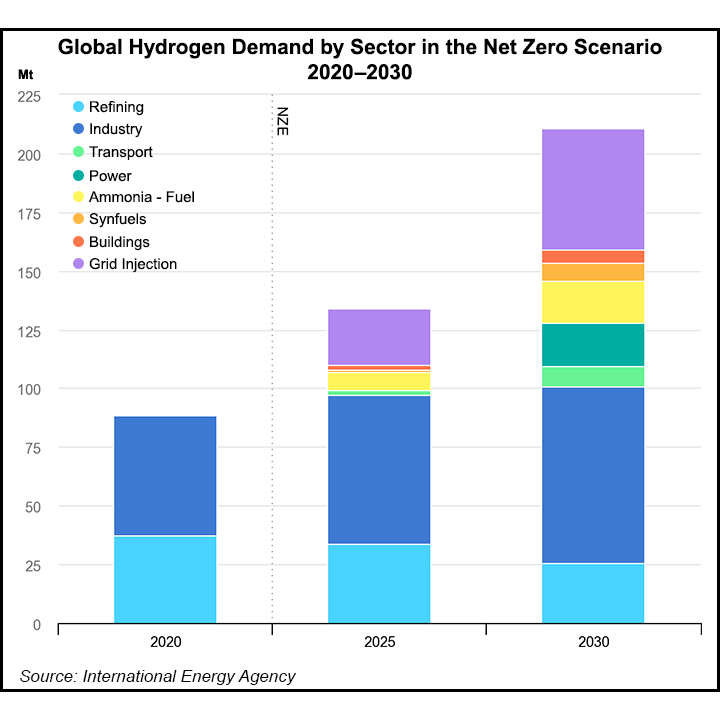 The California Public Utility Commission (CPUC) study, Hydrogen Blending Impacts Study, researchers from the University of California at Riverside (UC Riverside) and the Gas Technology Institute (GTI) completed a review of existing literature, in addition to laboratory experiments to assess areas of concern.

“The various sectors of the natural gas infrastructure – end-use, distribution, transmission and storage – are at varying stages of readiness due to the many factors that are becoming more well understood, thanks to research projects such as the UC Riverside work,” a GTI spokesperson told NGI.

Researchers tested 5%, 10%, 20% and 50% hydrogen-methane blends in certain components of pipeline infrastructure. They found that as the concentration of hydrogen increased in the gas blend, there was a greater chance of pipeline leaks.

UC Riverside associate research engineer Arun Raju, the principal investigator, told NGI that in “a scenario where hydrogen is being injected into the natural gas system with the goal of achieving 10% blending, but the mixing is not thorough, then there is a possibility that the concentration of hydrogen is not uniform everywhere in the gas stream.

“Higher hydrogen concentration pockets,” which could be avoided by ensuring uniform blending, could “have a more severe effect on the materials, thus causing” performance or safety concerns, Raju said.

Hydrogen concentrations greater than 20% also increased the chance of a gas ignition outside of a plastic pipeline, as hydrogen has a better chance of leaking through plastic pipeline material, according to the study.

However, because of the lower energy content of combusting hydrogen gas, more hydrogen-blended natural gas would be required to deliver the same amount of energy to users compared to pure natural gas.

“As we learn more, we’ll have greater confidence in what it will take to safely operate pipelines with hydrogen blends,” the GTI spokesperson said.

One of the main takeaways from the study, GTI said, is that “not all of the knowledge gaps can be addressed through modeling or laboratory scale experimental work, so it is critical to conduct real world demonstration of hydrogen-methane blending under safe and controlled conditions.”

The study recommended that utilities, research and development (R&D) organizations, state agencies, as well as community organizations and stakeholders conduct large scale demonstrations and plan for hydrogen blending into the natural gas system.

“Based on our work and current literature data, hydrogen blending into the natural gas infrastructure is an important strategy that can help accelerate a transition towards renewable hydrogen production and use,” Raju told NGI. “However, hydrogen blending must be carefully planned and conducted in stages to address the effect of hydrogen on materials, components, facilities, and equipment.”

While the study has not been peer-reviewed, the research team “had several organizations and individuals in the Technical Advisory Committee for the project that included gas utilities, industries, regulatory agencies, academic institutions and national laboratories,” Raju said.

In addition, sections of the study may be published in peer-reviewed journals in the future.

The CPUC recently changed Rulemaking 13-02-008, which originally addressed California’s intention to inject biomethane into natural gas pipelines. The rulemaking allos the public to comment on the study’s findings until Aug. 12.

Meanwhile, the U.S. Department of Energy (DOE) intends to fund R&D to accelerate its Hydrogen Shot goal of reducing the cost of green hydrogen to $1/kg in one decade.

The potential funding is also aimed at advancing the Biden administration’s goal of achieving a carbon-free electric grid by 2035, as well as net-zero carbon emissions across the entire U.S. economy by 2050.

The Biden administration has zeroed in on hydrogen projects, including a federal grant to support at least four regional hydrogen hubs. According to the $8 billion program, at least one hydrogen hub should demonstrate end-use in electricity generation, while another would be for industrial activities, and at least one for residential/commercial heating applications.

In May, California formally declared that it would seek federal funding to construct a regional hydrogen hub, with PG&E hinting that it may partner with the state on such efforts.

“It is important to upgrade the natural gas infrastructure, along with safety and maintenance procedures, in order to safely blend hydrogen,” Raju said.