Hurricane Matthew continued to batter Florida’s east coast Friday, knocking out electricity to hundreds of thousands, resulting in a 0.5 Bcf/d drop in natural gas demand in the state, but the longer-term impact on natural gas facilities seemed slight. 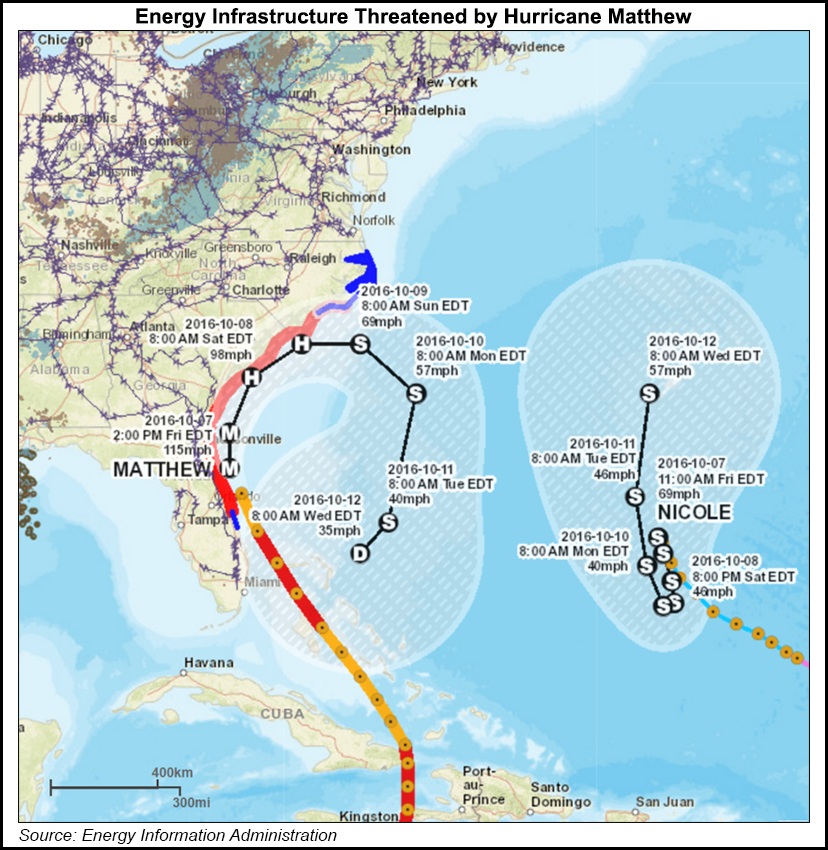 At 5 p.m. EDT Friday, Hurricane Matthew was causing “devastation along the northeast coast of Florida,” according to the National Hurricane Center (NHC). The Category 3 hurricane packed maximum sustained winds of 135 mph and was moving north at about 12 mph, NHC said.

A hurricane warning was in effect north of the Flagler/Volusia county line on Florida north to Surf City, SC, just northeast of Wilmington, SC, and tropical storm warnings were in effect for almost the entire North Carolina coast.

Evacuations, business closings, and a resulting decline in power generation had overall natural gas consumption in Florida down about 0.5 Bcf/d Friday morning, according to Genscape Analyst Thomas Jennings.

“I think the seven-day [Florida gas demand] average prior to today was probably around 3.5-4.0 Bcf, and now it’s down to the low 3.0s,” Jennings told NGI. “That’s a pretty big dip, an unseasonable dip. Florida’s usually pretty steady when it comes to power demand, even through the shoulder season, it’s pretty robust.”

That lost demand should bounce back as residents return home in coming days, and with no reports of significant storm damage to natural gas facilities so far, Matthew is unlikely to have long-term negative effects on the industry, he said.

“We have not seen a hurricane this strong in almost a decade,” said Craig Fugate, administrator of the Federal Emergency Management Agency. “It has already devastated Haiti, and has been building strength on its way to the U.S. As it makes landfall in Florida tonight and tracks up the eastern coastline over the coming days, Americans living in its path can expect to see life-threatening hurricane conditions, storm surges, tropical force winds, heavy rains, and all the devastation that that may bring.”

Electricity facilities are the main worry in the energy sector as Hurricane Matthew continues up the coast, according to the Energy Information Administration (EIA).

“Because of the storm’s proximity to the coast, high winds, rainfall, and flooding will potentially affect electricity infrastructure such as power transmission and distribution lines. Thousands of customers are already without power. Although there are no petroleum refineries or natural gas processing plants along the East Coast from Florida to Maryland, some product terminals could be affected, potentially reducing energy imports,” EIA said.

At 8 a.m. EDT Friday, Florida Power & Light Co. (FPL) said about 475,000 of its customers were without electricity, and the utility expected more outages as more than a million customers in Central and North Florida remained in Matthew’s expected path.

“While we are fortunate that Matthew has yet to make landfall in Florida, we still have a deadly category 3 hurricane a few miles offshore, and at this point in the restoration process, it would appear the investments we’ve made during the past decade to make the electric grid stronger and smarter are making a difference for our customers,” said FPL CEO Eric Silagy. “Based on our grid’s performance thus far, we are seeing fewer outages and faster restoration times.

The NHC on Friday was predicting an unusual track for Matthew, with the hurricane moving along the East Coast through early Sunday, then moving in a clockwise circle that could bring it back to the Bahamas and the Florida coast, as a diminished tropical storm or tropical depression, by next Wednesday.