North American natural gas prices continued on the downward swing this week as Hurricane Ian pummeled the U.S. state of Florida and markets braced for a potential economic slowdown. 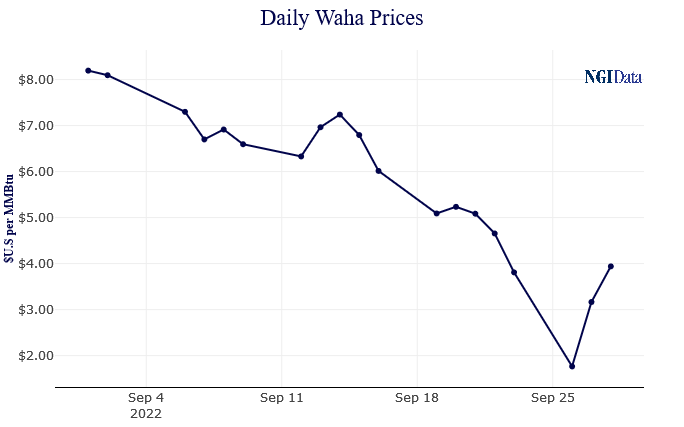 The October Nymex natural gas futures contract edged up 21.7 cents on Wednesday, its final day as prompt month, to expire at $6.868/MMBtu. On Thursday, November took over as the prompt month and futures prices dipped to $6.874, down 8.1 cents.

Nearly 2.5 million Floridians remained without power on Thursday after the hurricane barreled its way through the Sunshine State. The “devastating outages” could contribute to downward pressure for the November Nymex natural gas futures contract, according to EBW Analytics Group analyst Eli Rubin. A plump U.S. natural gas storage print in addition to continued high Lower 48 production of around 100 Bcf/d also weighed on prices.

NatGasWeather said “supply/demand balances are much looser than they had been a few weeks ago” which should lead to “at least a couple more solid storage builds in at least the next two weeks.” This would bode well for a bearish outlook.

Rystad Energy vice president Emily McClain said European gas prices “appear like a leaf in the wind, with little indication on how far they will be carried and in what direction.”

The West Texas Waha benchmark, an important natural gas pricing hub for Mexico, continued trading at a steep discount to Henry Hub this week, at times by as much as $4.00. East Daley Analytics forecasts Permian Basin egress to tighten by late 2022, “yet the steep discounting at Waha suggests takeaway is already tight.”

Analysts suggest Permian prices are being impacted by reduced southbound exports to Mexico. After hitting a record near 1.5 Bcf/d this summer, total exports on West Texas pipelines have eased by 0.3 Bcf/d recently as Mexico comes off its peak summer season.

President Andrés Manuel López Obrador said this week that an LNG export hub in the port of Coatzacoalcos, Veracruz, could potentially help Europe wean itself off Russian gas. The gas would most likely be sourced from the United States, which was supplying 87% of total Mexico consumption as of May.

Meanwhile, economic concerns hang over the market in Mexico. Despite worries of a recession, the Bank of Mexico hiked its interest rate by 75 basis points to a record 9.25% on Thursday, following in the footsteps of the U.S. Federal Reserve Bank. Annual inflation in Mexico hit 8.76% in the first half of September.

Demand on Mexico’s Sistrangas on Tuesday (Sept. 27) was 4.545 Bcf, up from 4.462 Bcf a day earlier. Mexico gas production fed into the system was 1.279 Bcf. Southeast production dominated the total, with 714 MMcf from the region injected into the pipeline system.

The power sector was the biggest user of natural gas on the Sistrangas on Tuesday, at 1.382 Bcf. This was followed by the distribution segment (1.145 Bcf) and Pemex (1.090 Bcf).

In Mexico, NGI natural gas cash prices nosedived week/week, losing over a dollar at most points. On Wednesday, Los Ramones was down 16.3 cents day/day to $5.851. Monterrey via the Mier-Monterrey system dropped 16.2 cents to $7.639.

On Thursday, the U.S. Energy Information Administration (EIA) reported a 103 Bcf injection into natural gas storage inventories for the week ending Sept. 23. It matched last week’s print and was above expectations.

The South Central region saw a 23 Bcf increase in inventories, which included a 18 Bcf injection into nonsalt facilities and a 5 Bcf increase into salts, according to EIA. Until Mexico develops storage capability, this is the storage system most readily available to the country.