Escalating supply concerns ahead of the summer – forecast to be hotter than usual – appear to be driving huge increases for June baseload natural gas prices, according to NGI’s Bidweek Alert (BWA). 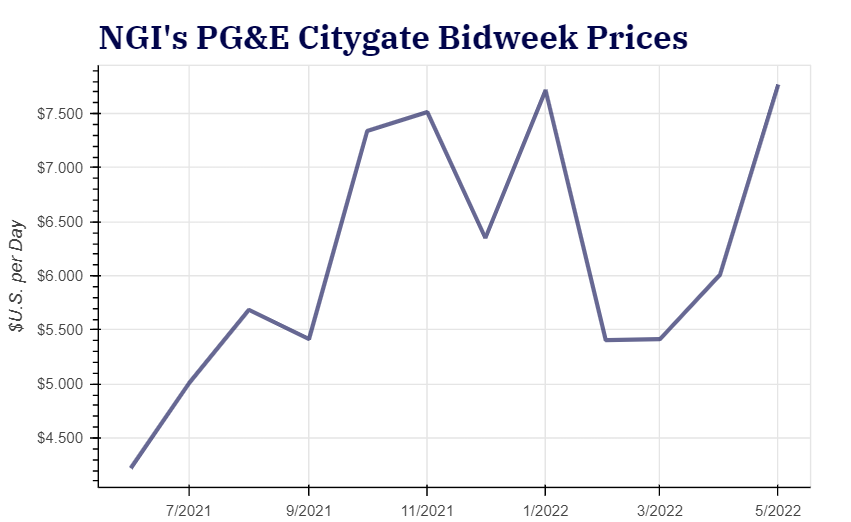 After late-season blasts of wintry air hampered production in April, producers are struggling to grow output beyond the recent low to mid-90 Bcf/d range. Production estimates had finally topped 95 Bcf/d earlier this week, but ongoing maintenance quickly pushed volumes down.

At the same time, demand is starting to ramp up as early season heat grips the southern United States and, at times, the Northeast. Forecasts were calling for a bit of a reprieve over the next couple of weeks, however, with near-normal temperatures expected during the period.

Overall, the background La Niña state portends hotter weather developing across most of the Lower 48 this summer. Notably, though, even when temperatures have trended close to seasonal norms, power burns have surprised to the upside.

These stronger-than-normal power burns have added to the structural support coming from robust export demand. Feed gas deliveries to U.S. liquefied natural gas (LNG) terminals climbed back above 13 Bcf/d this week after various scheduled maintenance activities. Volumes are likely to grow further as new export facilities ramp up and Europe works to replenish its inventories ahead of next winter. The continent is preparing for less gas from Russia following its invasion of Ukraine.

Meanwhile, the steady call on U.S. LNG and strong domestic demand picture have prevented Lower 48 inventories from recovering from steep deficits that developed this winter. The U.S. Energy Information Administration said stocks as of May 13 were at 1,732 Bcf, which is 358 Bcf below year-earlier levels and 310 Bcf below the five-year average.

The precarious storage situation, with heat expected to continue building, has been a boon to prices. Some analysts have predicted Henry Hub prices could reach $10 sooner rather than later.

West Texas prices for June baseload gas also jumped sharply higher month/month. El Paso Permian traded between $8.070 and $8.200, up from a $5.995 average for May baseload gas.

Even higher prices were seen on the West Coast, where the ongoing drought has combined with potentially record-breaking heat this week to drive up demand. Wildfires also have become more widespread.

AccuWeather said Tuesday the Hermits Peak Fire, which started in New Mexico when crews lost control of a prescribed burn, was only 40% contained with more than 311,000 acres lost as of Tuesday morning. Farther south in the state, the Black Fire was only 11% contained with 146,000-plus acres burned as of the start of the week.

Active fires also continued in Arizona. The Tunnel Fire, north of Flagstaff, AZ, had burned nearly 20,000 acres, but it was 98% contained as of early Monday.

In California, light winds prevented a brush fire from growing before it was fully contained, but heat is forecast to mount this week. AccuWeather said Sacramento temperatures could hit 104, while Fresno may top 102.

Downstream, Algonquin Citygate basis was seen at minus 45.0 cents, which compares with the 54.5-cent discount seen for May baseload gas.