Natural gas forward curves blew up for a fourth consecutive week as lingering production outages continued to perpetuate supply concerns ahead of the peak winter season. October forward prices rallied by an average 47.0 cents, and November shot up 54.0 cents on average, according to NGI’s Forward Look. 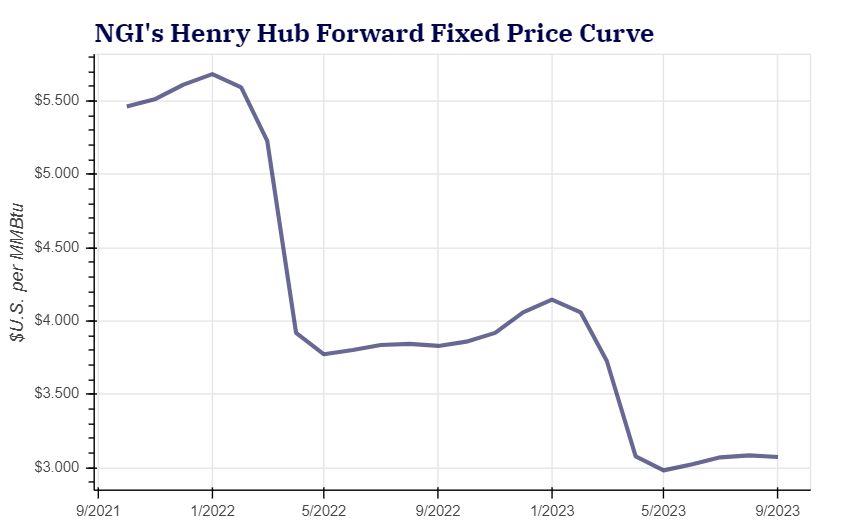 Gains were even more stout further out the curve as the potential for record liquefied natural gas (LNG) exports and a concurrent hike in domestic gas consumption in the winter sparked fears of a supply shortage. The winter strip (November-March) averaged 61.0 cents higher for the trading period ending Sept. 15, while the summer 2022 strip (April-October) picked up only 8.0 cents on average.

Forward prices have staged a meteoric rally in the past month. After struggling to reach $3.00 at the beginning of summer, robust structural demand unrelated to the weather has provided ammunition for bulls looking to pounce. Strong export and industrial demand have supported the rally, while the supply side suffered a crushing blow from Hurricane Ida.

The storm, which stormed into Louisiana Aug. 29, wiped out nearly all Gulf of Mexico (GOM) gas production. It was not until the past week that a meaningful recovery began to take place, but there’s more to do. In Thursday’s midday update, the Bureau of Safety and Environmental Enforcement said about 30% of the gas produced in the GOM remained offline.

Wood Mackenzie analyst Kara Ozgen said some pipelines have reported increasing flows as production has returned. On Wednesday, Destin Pipeline notified customers that flows had  increased to at least 160 MMcf/d. That would allow the Pascagoula Gas Plant in Mississippi to resume operations. High Point Gas Transmission subsequently alerted customers that it would resume service to Destin Main Pass 260.”

Meanwhile, power restoration efforts have made significant progress. Entergy Corp. indicated that 93% of its Louisiana customers that lost power during Ida had been restored. All affected Mississippi power customers also had returned to service.

Even before Ida crashed ashore in Port Fourchon, LA, last month, production left much to be desired. Exploration and production companies have continued to maintain financial discipline, strengthening their balance sheets, paying down debt and returning money to shareholders. Restraining output has left supply more or less stagnant over much of the past year, falling short of demand growth.

“The dominant narrative in the market remains that we will be heading into winter with storage levels too low for the market to be comfortable,” said Bespoke Weather Services. “Barring a large gain in production very soon, there really is little out there which can materially alter this theme, at least until we reach the time of year when weather becomes more important.”

On the weather front, Bespoke said long-range forecasts continued to cool. The European weather model specifically has changed course significantly over the past several runs and backed off the heat initially expected for the next couple of weeks.

Despite drastically lowering the cooling degree day outlook, though, the model has yet to pick up any notable heating degree days. This has resulted in a “weak overall demand picture,” a pattern Bespoke expects to continue into October.

Meanwhile, NatGasWeather said rains from former Hurricane Nicholas were winding down, with impacts thus far relatively minor. There also are a couple tropical systems of interest, according to the firm. One is seen grazing the Mid-Atlantic Coast in the coming days, but it should be “only a minor threat.”

A stronger cyclone is expected as a wave in the Eastern Atlantic strengthens and tracks toward the Caribbean this weekend. There was uncertainty about its direction, but some potential to churn toward the United States.

For now, mild weather is set to continue across the northern tier, while cities from California to West Texas bake. Daytime temperatures were expected to remain firmly in the 90s and 100s as high pressure rules over the region.

For California and much of the West Coast, the forecast is a continuation of the oppressive heat that’s plagued the region this summer. On top of the scorching heat, drought conditions have impacted supply, with one hydroelectric power generator forced offline. That has led to increased power imports that have often been gas-fired generation.

With cooler weather in the forecast for the rest of the country, though, the drop in temperatures was a welcome relief for traders hoping that storage would refill to more comfortable levels. Although the Labor Day holiday brought about a decline in gas demand, the dire storage picture remained firmly in place.

On Thursday, the Energy Information Administration (EIA) said inventories for the week ending Sept. 10 rose by 83 Bcf. That was at the high end of estimates but a few Bcf shy of last year’s 86 Bcf build for the similar week. The five-year average injection stood at 79 Bcf.

Ahead of the EIA report, a Wall Street Journal survey landed an average build estimate of 74 Bcf, with a range of 59 Bcf to 80 Bcf. A Reuters poll found injection estimates spanning from 59 Bcf to 85 Bcf, with a median of 77 Bcf. NGI estimated a 72 Bcf increase for the report.

NatGasWeather noted it was the second week in a row the storage miss was to the bearish side, suggesting the supply/demand balance wasn’t as tight as previous weeks.

However, Bespoke said the EIA’s 83 Bcf figure doesn’t tell the market much, as some of the larger build can be attributed to Ida’s impact. “In short, a weaker overall number, but not something the market is likely to view as a game-changer that solves the storage situation as we head toward the winter season,” it said.

Broken down by region, the Midwest added 34 Bcf into storage and the East added 29 Bcf, according to EIA. South Central stocks rose by 22 Bcf, including a 13 Bcf build in nonsalt facilities and a 9 Bcf build in salts. Mountain inventories increased by 2 Bcf.

The Pacific continued to withdraw amid continued tightness in the region thanks to robust demand and supply constraints. The region pulled 3 Bcf out of storage.

Total working gas in storage as of Sept. 10 stood at 3,006 Bcf, which is 595 Bcf below year-ago levels and 231 Bcf below the five-year average, according to EIA.

NatGasWeather said the modest improvement in deficits should hold near that level after next week’s EIA figure prints near the five-year average of 74 Bcf. The following few builds are favored to increase in size as near-perfect temperatures set up across much of the United States, which is typical of the fall shoulder season.

“The big question is whether a few of these builds will reach or exceed 90-100s Bcf, which seems quite possible after Thursday’s printed a bearish 84 Bcf,” NatGasWeather said. “This keeps our forecast intact for end of injection season supplies to be a little over 3.5 Tcf by mid-November.”

Generally speaking, storage above 3.5 Tcf is enough to get the United States through an average winter without extreme volatility, according to Mizuho Securities USA LLC’s Robert Yawger, director of Energy Futures. The last time EIA gas storage failed to reach the 3.5 Tcf level was the winter of 2018-2019. Storage that year maxed out at 3.247 Tcf, with prices topping out at $4.929.

Judging by price action over the past week, 3.5 Tcf in storage may not be enough.

As a result of upward momentum in 1Q2022 and more aggressive selling in the summer months, the Henry Hub March/April spread widened another 23 cents on Wednesday to $1.306. The last time the so-called widowmaker spread was this wide was in late 2018, according to Mobius. At that time, the March/April 2019 spread peaked above $1.50 before collapsing to near zero by expiry.

“With small signs of demand curtailment beginning to pop up and rumors of expedited in-service for drilled but uncompleted wells, the market will weigh whether there is more upside or downside in this spread even before winter demand is in sight,” Mobius said. “For the time being, downside potential should be tempered by what continues to be a remarkably buoyant Asian and European market.”

LNG demand has remained rampant throughout the summer amid strong demand, supply constraints and the need to replenish storage in Europe and Asia. The tight backdrop has led to record pricing on both continents, which has kept U.S. prices well supported even when domestic demand has ebbed.

However, if the winter weather is colder than normal in the Lower 48, analysts are beginning to question whether gas prices may rise enough to stall exports and keep the gas for U.S. consumers.

EBW Analytics Group said global LNG pricing may represent a higher ceiling, but it brings several challenges. First, the time lag between exporting an LNG cargo from the United States and arriving at its final destination is at least a one-month period. The price signal, therefore, has to happen with sufficient lead time to shut-in a cargo.

“Even then, there are significant concerns if offtakers who signed contracts for the right to guaranteed supplies in high-priced situations — and likely facing very tight supplies domestically in both Europe and Asia — are willing to relinquish valuable cargoes,” EBW analysts said.

In addition, as with ethane and fuel oil pricing, global LNG prices may be dynamic and change rapidly, according to EBW. Rising LNG prices could boost the ultimate ceiling for Nymex natural gas, but a warm winter in Europe or Asia could lead to a sharp downturn.

Though likely temporary, a significant downturn for Nymex futures materialized on Thursday following the bearish storage report. The October contract settled at $5.335, off 12.5 cents from Wednesday’s close.