Tulsa-based Helmerich & Payne Inc. (H&P), which warned in July that Lower 48 drilling still had room to decline, has reduced its capital spending through the rest of the year. 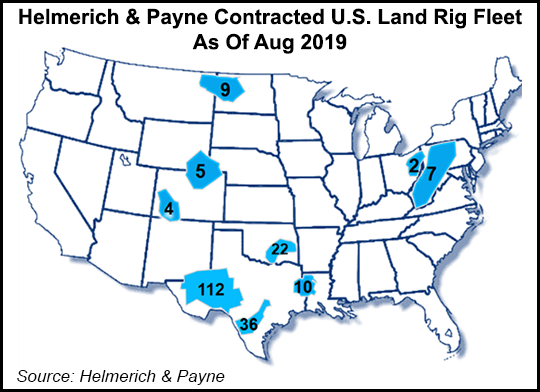 H&P, one of the leading unconventional drillers in North America, had expected fiscal 2019 capital expenditures (capex) to be at the low end of its $500-530 million guidance. However, it now expects total capex to be $5-15 million below the low end of that range, “with the final outcome dependent on the timing of certain procurement activities in late fiscal 2019 and early fiscal 2020.”

“This level of activity is consistent with H&P’s previously provided guidance, which stated the company expects quarterly revenue days to decrease by approximately 5-6% sequentially representing a roughly 6-7% decrease in the average number of active rigs.”

H&P expects to exit September at the low end of its previously guided range of 193-203 rigs.

During the fiscal 3Q2019 conference call two months ago, CEO John Lindsay said the company exited June with a lower-than-expected rig count. Expectations that the rig count would hit a bottom by midyear had “turned out to be premature.”

The global operator also is in the process of determining the impacts on its Argentina business and financial position related to two recent government decrees that impact the exchange rate and currency controls. At the end of June, about 8% of the consolidated revenue was generated from international operations of which 88% was from the Argentine operations.

H&P currently has 16 rigs operating in Argentina, including eight that are under term contract with state-owned YPF SA.

The company on Thursday issued a preliminary capex budget of $300 million for fiscal 2020, which would include $35 million to increase super-spec walking capabilities in U.S. land and select international super-spec upgrades “should demand for such rigs develop in fiscal 2020.” Approval of the budget is expected in fiscal 1Q2020.