Europe’s energy crisis has been a boon for American liquefied natural gas (LNG) exports and Russia’s incursion into Ukraine puts them in an even better position, but the attack underway is expected to not push U.S. natural gas prices significantly higher. 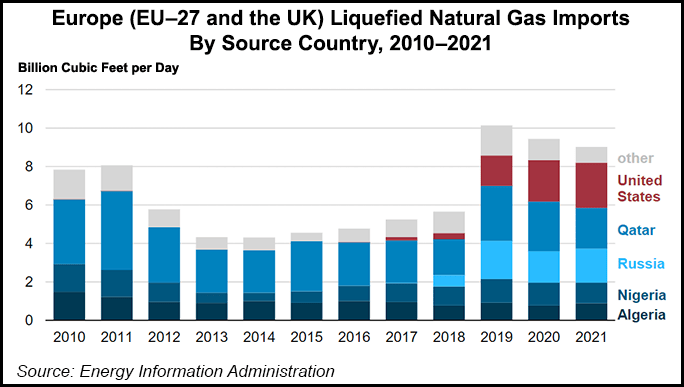 The United States, Qatar and Russia provided almost 70% of Europe’s LNG imports last year, according to the U.S. Energy Information Administration. The United States became Europe’s largest supplier in 2021, providing 26% of all the LNG imported by the European Union in a trend that has continued this year.

Europe imported a record 11.6 million tons (Mt) of LNG in January, about half of which was provided by the United States, according to Kpler. The continent is on track to import 10.8 Mt this month, of which 5.2 Mt is projected to have come from the United States, Kpler data showed.

NGI calculations show it is currently more profitable to move LNG from the Gulf Coast to Europe through the summer, at which point the spread to Asia remains extraordinarily narrow. Moreover, the forward curve for the European benchmark Title Transfer Facility (TTF) contract is backwardated with summer gas at a rare premium to winter 2023. It suggests the market expects supplies to be tight if the conflict between Russia and Ukraine spirals further.

The European Union is also expected to unveil a strategy early next month to cut its reliance on Russia, which provided 31% of all the continent’s natural gas imports last year, according to the Oxford Institute of Energy Studies (OIES). While Russia has diversified its transit routes in recent years, about 22% of the 168.7 billion cubic meters of natural gas Russia sent to Europe last year went through Ukraine, OIES said.

If Russian supplies are cut by the clash in Ukraine, Europe would have to lean heavily on a combination of LNG, storage, domestic production, pipeline imports from other suppliers and possibly even energy conservation measures to fill the void.

Despite what could be even stronger near-term international demand, particularly as Asia is likely to continue vying for cargoes as the spring restocking season nears, Henry Hub prices have barely budged. The U.S. benchmark has traded in a range below $5/MMBtu this year as TTF has climbed back toward $30.

The United States cannot produce more LNG than it already is producing. The LNG export plants have been running near full utilization, removing any doubts about how much more could be moved overseas.

“We’re already maxing out capacity and have been pretty consistently for more than a year,” Schneider Electric analyst Christin Redmond told NGI. “Exports will likely gradually increase as the Calcasieu Pass export facility is brought online, but outside of that, we have no ability currently to increase exports further.”

Since LNG exports started from the Lower 48 in 2016, low cost U.S. LNG has been tailored and sold to a global market accustomed to restrictive trade that limited where cargoes could go and curbed spot trading. Flexible U.S. contracts allow offtakers to switch cargo destinations to capture price premiums, which has allowed U.S. LNG to flow freely where it is needed.

By the same measure, however, long-term contracts lock up about 85% of an export terminal’s capacity. While long-term offtakers can move cargoes wherever they want, the bulk of U.S. capacity is already spoken for, which cuts available spot supply for Europe.

International markets and natural gas benchmarks are more closely correlated than they once were as the LNG trade has grown. However,  the U.S. gas market is far more insulated than others. NGI’s Pat Rau, director of Strategy and Research, noted that the country still supplies more than 90% of its internal gas needs from domestic production, which can ramp up fairly quickly and meet any surge in demand with a robust pipeline grid.

“Europe and Asia just don’t have that same ability,” Rau said. “Thus, the U.S. is relatively shielded from price machinations abroad, except to the extent that global prices plunge to the point where U.S. LNG exports are no longer economically viable. That’s clearly not the case today, of course.”

In 2020, amid a glut of global gas supplies, both TTF and the Japan-Korea Marker crashed through Henry Hub. The steep fall in international prices at the time was a signal to the United States –  a source of marginal and flexible supply – that the world didn’t need anymore cargoes. U.S. facilities shut in and helped clear the global glut.

The longer-term outlook for U.S. natural gas is still bullish. Storage sits below the five-year average and producers continue to limit spending and output. Hotter weather in the U.S. could increase domestic demand this summer. If the situation in Europe continues and Asia has a hot summer, that could sustain LNG demand and make it more difficult to replenish U.S. gas stocks. That would support U.S. prices, said NGI’s Leticia Gonzales, Price & Markets editor.

Domestic fundamentals remain the dominant factor. The winter season is nearing its end and the U.S. market will be more attuned to the drop in demand in the coming weeks, Gonzales said.

“We are certainly more tethered than we ever have been, but generally speaking, at this moment in time, any huge rallies we could see in U.S. prices that are directly linked to Russia and Ukraine will likely be short lived.”