In similar fashion to last year, House lawmakers have proposed modest budget cuts in fiscal year (FY) 2019 to the Department of Interior (DOI) and the Environmental Protection Agency (EPA), but also a full repeal of an Obama-era rule over which waterbodies deserve federal protection. 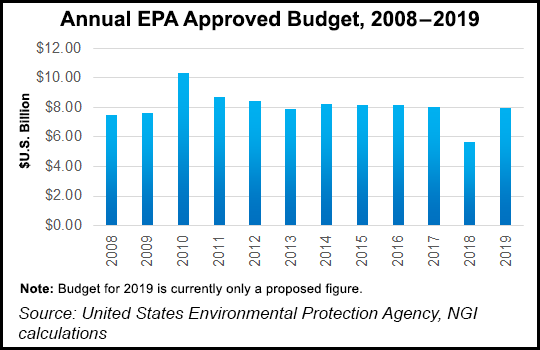 The House Appropriations Committee on Monday unveiled a draft version of a spending bill that calls for providing $35.2 billion to fund DOI, EPA and related agencies in FY2019. The House Subcommittee for Interior, Environment and Related Agencies began marking up the appropriations bill on Tuesday.

Rep. Rodney Frelinghuysen (R-NJ), committee chairman, said the draft “continues the hand-in-hand work with the [Trump] administration to stop economically harmful, unnecessary regulations at the EPA and others, to make sure core U.S. industries have the opportunities they need to thrive.”

Under the draft spending bill, DOI would reportedly receive $13.1 billion in total, including $1.4 billion for the Bureau of Land Management (BLM), an increase of $55 million above the enacted level for FY2018. The BLM allocation includes $60 million for sage grouse conservation efforts, plus an additional $6.2 million “to expand energy and mineral development,” according to the committee.

The draft spending bill also proposes $1.2 billion in funding for DOI’s U.S. Geological Survey (USGS), an increase of $19 million in funding above FY2018. That includes $21 million for an earthquake early warning system, which could be deployed in Oklahoma, where regulators continue to mitigate induced seismic activity attributed to wastewater disposal from oil and gas drilling.

DOI’s Bureau of Ocean Energy Management (BOEM) would receive $180.2 million under the draft spending bill, while the Bureau of Safety and Environmental Enforcement (BSEE) would receive $144.9 million. Funding for other DOI agencies of note include the National Park Service ($3.25 billion), the U.S. Fish and Wildlife Service ($1.6 billion), and the Office of Surface Mining, Reclamation and Enforcement ($229 million).

The bill also proposes that DOI collect annual inspection fees for facilities above the waterline in the Outer Continental Shelf (OCS) and are in place at the start of FY2019 — excluding drilling rigs.

Drilling rig fees would be assessed for all inspections completed in FY2019. They would total $30,500 per inspection for rigs operating in deepwater (500 feet or more) and $16,700 in the shallow waters of the OCS.

EPA funding would be $7.96 billion, or $100 million below the FY2018 enacted level. Funding for the EPA’s regulatory programs would be reduced by $228 million, as the committee looks to support President Trump’s proposal to reshape the EPA’s workforce “by providing resources requested to offer buyouts and voluntary separation agreements to employees.”

Lawmakers included two policy riders from last year’s draft spending bill for FY2018. The first authorizes the EPA and the U.S. Army Corps of Engineers to withdraw the controversial Clean Water Rule (CWR), which was promulgated by both during the Obama administration to clarify what constitutes Waters of the United States (WOTUS). Meanwhile, the second would prevent DOI from listing the sage grouse under the federal Endangered Species Act.

Last February, the EPA and the Army Corps finalized a two-year delay for the CWR to take effect. In its place, the agencies proposed recodifying the identical regulatory text that existed prior to 2015 to define WOTUS. The rule has been opposed by the oil and gas industry, agricultural interests, manufacturers and their Republican allies in Congress since it was first proposed in May 2015.