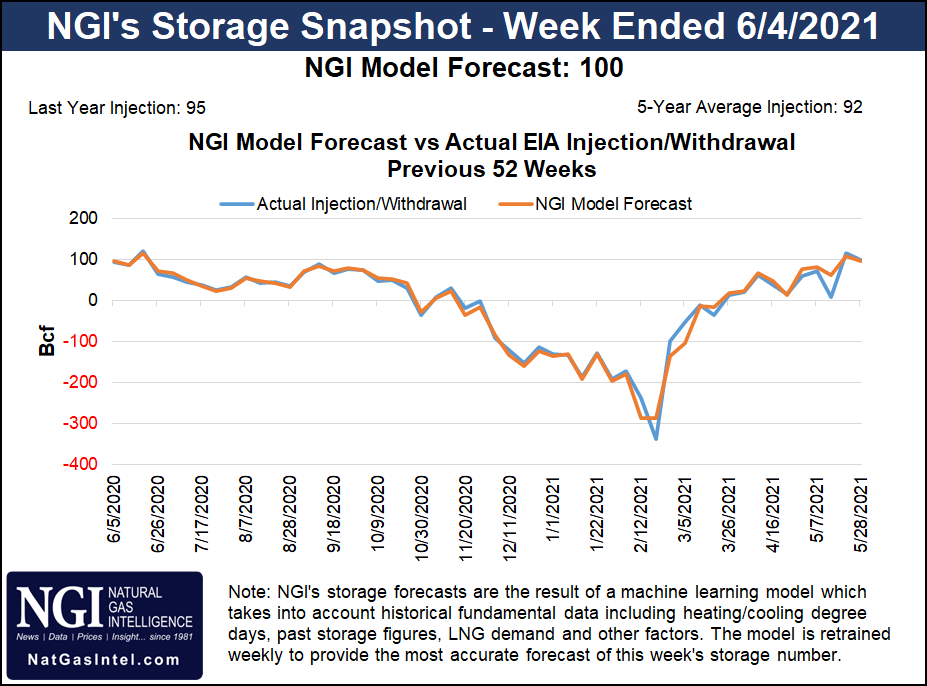 Natural gas futures edged up early Wednesday as traders mulled an increasingly hot June forecast against a projected hefty storage build. Though briefly moving into the red, the July Nymex gas futures contract settled Wednesday at $3.129, up a mere one-tenth of a cent on the day. August climbed four-tenths of a cent to $3.144.

With liquefied natural gas (LNG) feed gas demand still rather “uninspiring” because of ongoing maintenance, the current heat wave in Texas and along the Gulf Coast was the primary driver of Wednesday’s gains at the front of the Nymex futures curve, according to NatGasWeather.

The firm said the European Centre (EC) and the American Global Forecast System (GFS) models each added a few cooling degree days overnight. Strong heat was seen continuing through the weekend, but then easing to more seasonal next week as hot high pressure was forecast to shift over the western half of the country. In the eastern third of the country, more comfortable temperatures were expected, along with showers.

“This cooler-than-normal pattern over the eastern U.S.,” forecast to run from Tuesday through June 21, “is what’s preventing the pattern from being considered solidly bullish,” said NatGasWeather.

The forecaster also noted that while LNG feed gas remained well off record highs at around 8.8 Bcf, the drop was partially countered by strong exports to Mexico that have been running near 7.0 Bcf/d.

The forecaster expects the weather pattern for the June 22-27 period to be of increasing importance in the coming days. Both the GFS and EC data had teased at stronger demand, with upper high pressure over the West shifting over the southern United States. However, the midday GFS run “was a little slower in its development to lose a little demand for June 21-23.”

Outside of weather, Thursday’s government inventory report may spark some more meaningful price direction one way or the other.

Market observers are expecting the storage build to be hefty, with estimates pointing to an injection in the 90s to low 100s Bcf for the next Energy Information Administration (EIA) report.

This would compare with last year’s 95 Bcf injection for the similar period and the 92 Bcf five-year average, according to EIA.

NatGasWeather said while Thursday’s storage report may generate a triple-digit injection, market participants are likely more interested in the following two builds. These could reflect how the current heat wave extending across the central and southern regions impacts demand/build sizes.

“We expect deficits will improve slightly off this Thursday’s EIA report, but then increase modestly after next week’s EIA report accounts for current hot conditions over the central and southern U.S.,” the forecaster said.

Following Thursday’s report, the next two weeks of storage data are likely to be closer to normal until more impressive heat builds over the eastern half of the country, according to NatGasWeather. “Essentially, we don’t expect big changes in supply deficits versus the five-year average until late June, but then with the potential to increase if hotter patterns come to fruition by the start of July.”

The EIA’s weekly inventory storage report is scheduled to be released at 10:30 a.m. ET.

“This fundamental view is now to a large extent reflected in forward U.S. gas prices,” said the analyst team led by Samantha Dart.

“We are not calling the top for U.S. gas prices at current levels,” but analysts expect “more symmetric price risks from here.”

The Houston-based firm noted that natural gas is a key input for producing fertilizer, which will be needed in increasing quantities based on forward corn/soy markets. In addition, it said unless the price of Brent crude collapses, a Henry Hub-linked methane molecule would remain one of the cheapest sources of LNG in the world. Finally, “access to capital will always determine how prolonged an elevated pricing environment can last before a supply side response takes shape.”

Spot gas prices started to retreat in parts of the country on Wednesday even as hot weather pounded the southern and central United States. Cooler weather on the East Coast, thanks to thunderstorms moving into the region, led to sharp losses there.

The rest of the country saw much smaller shifts day/day. In Texas, where temperatures continued to reach the 90s, spot gas prices slipped no more than a dime at the majority of locations. Houston Ship Channel dipped 3.0 cents to $3.005, and El Paso Permian lost a penny to hit $2.760.

A handful of Rockies locations picked up more than a dime, while most California markets shifted only slightly.