The venerable Permian Basin, where production peaked in the 1970s, has come to life bigger and stronger, and is proving to still be the rock of choice for a lot of exploration and production (E&P) companies and oilfield service operators. 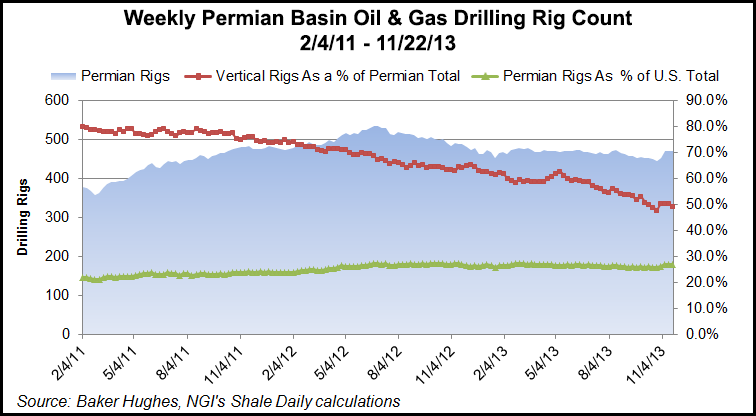 It’s not that the Permian ever disappeared. For Texas, it has been the basin of choice for drillers since the 1920s. And it is once again, elevated by technology and money. Today, nearly half (47%) of all the drilling rigs in the United States are in Texas and almost half of the state’s rigs are looking for resources in the Permian Basin, according to Midland, TX-based Workforce Solutions.

For perspective, the Permian — not including the Eagle Ford Shale or other state targets — of late has had about 380 drilling rigs in operation. Oklahoma is running around 175.

The remote West Texas mammoth that extends into New Mexico isn’t the easiest place to work, with labor in short supply and a lack of water within the formation. But there’s a lot of enthusiasm.

“Our developing view of the Permian is that it will be a more costly resource to develop than the shale oils of the Eagle Ford and Bakken,” said Jefferies analyst Brad Handler. “That may not matter when crude is near $100. But if spot prices trace the futures curve to the mid-$80s, Permian companies may underperform the competition…especially if companies can’t translate spectacular press releases into production beats.”

For the Texans who like everything bigger, the Permian certainly fits the bill, past and present. It’s long been one of the country’s bedrock producers, with estimated cumulative output from 1921 to 2013 at around 29 billion bbl, according to the Railroad Commission of Texas (RRC). Parts of the Permian extend into New Mexico, but the Texas portion by itself in 2012 produced more than half (57%) of statewide output — about 430 million bbl. Including liquids, the basin represented half (51%) of total output in Texas at 509 million bbl.

What that means to U.S. oil production can’t be overstated. Last year the West Texas basin accounted for 14% of total annual U.S. oil output of 2 billion bbl. Statewide, the production represents about one-quarter of all domestic oil output.

The number of wells is staggering too. At the end of 2012, the RRC estimated that about 133,000 total wells were in the Permian based on its proration schedule, monthly production reports submitted by operators. Of that total number, 22,000 were listed as active injection/disposal wells, with 82,000 producers at the end of 2012.

About 10,000 new wells are expected to be drilled in 2014 by operators large and small. And the wells are only getting better.

The Pioneer Natural Resources E.T. O’Daniel well in Midland County set a basin-wide record with a 24-hour initial production (IP) rate of 3,156 boe/d, 69% oil. “The 24-hr IP rate on one Wolfcamp D well in Midland County was the highest ever for any interval in the entire Midland Basin to date,” noted Canaccord Genuity E&P analyst Robert Christensen.

The management team of the biggest Permian “pure player,” Concho Resources, earlier this month disclosed an ambitious plan to double production by 2016, with a compound annual growth rate of 25% — 20% more in 2014, and 30% in ’15 and ’16. The growth in the past few years all is tied to the Permian’s Delaware Basin. Concho recently added 30,000 acres in Delaware Ranch in Culberson County, where one well had a 20-day rate of 3,700 boe/d.

“I’ve said this before and I can’t stress enough that horizontal drilling has changed the game in the Permian,” said Concho CEO Tim Leach. “Those with big drilling programs and talented technical teams are going to succeed over the long term. We have built a company capable of running a big scalable development machine, and we have proven quarter after quarter that we can execute horizontally across the Permian Basin.”

In 2014, Concho plans to spend about $2.3 billion, 65% to ramp up to 24 rigs in the Delaware Basin by the end of the year. The rest of the capital will be split across the Permian, with about one-quarter allocated to Wolfcamp and Spraberry wells in the Midland Basin and less than 10% in New Mexico. Close to one-third of total spending will be trained on drilling longer laterals.

Higher spending in the ancient play is on the minds of a lot of operators. Since 2008, Permian capital outlays have more than tripled to $18 billion last year, according to Wood Mackenzie. By the end of this year, spending should be close to $20 billion.

Birmingham, AL-based Energen Resources Corp. (ERC), the E&P arm of Energen Corp., has put most of its chips in the Permian, which holds 99% of its oil reserves. A critical part of its business is to add value by rejuvenating older fields, particularly true in the Permian. For instance, ERC is using waterflood operations to revive the legendary North Westbrook Unit, home to the Permian’s oldest oil producer, W.H. Abrams No. 1, which began pumping in 1920.

ERC allotted 85% of its 2012 capital spending to the Permian. This year the basin captured 94%.

“All-in-all, we’ve identified approximately 184,000 net acres in the Permian Basin with Wolfcamp potential,” said CEO Jim McManus. He discussed the basin’s potential during a 3Q2013 conference call in October. “If the play is successful on a large scale on multiple benches, Energen’s potential unrisked drilling inventory could exceed 5,300 locations on 80-acre spacing and 4,400-foot lateral lengths.”

ERC’s third quarter output from the Permian was up 36% year/year, with a 62% hike from the Midland Basin and a 78% increase from the Delaware.

Occidental Petroleum Corp. (Oxy) one of the biggest operators in the Permian, has accumulated more than 1.7 million net acres, enough to justify a recently created “exploitation team” whose mandate is to optimize drilling capabilities and accelerate opportunities. Horizontal opportunities are the name of the game.

Oxy is running seven horizontal rigs, and “we expect to ramp that up to 16 next year,” said U.S. oil and gas operations chief Vicki Hollub. “We are now being more aggressive with our properties in the Permian because we now understand them a little bit better. This exploitations team is going to be one that we have developed to get us into a position where we are more entrepreneurial and much more aggressive in the way that we attack our entrepreneurial opportunities in the Permian.”

Other E&Ps are understanding the basin better every day. Apache Corp., the second largest producer, saw its daily output from the Permian jump 18% year/year in the third quarter.

“I think the Permian is going to have years of surprises in it, and most of them are going to be good,” Apache CEO G. Steven Farris told analysts in a third quarter earnings conference call.

The Permian has become the “third leg” of Anadarko Petroleum Corp.’s U.S. strategy, which today is focused on the Rockies and deepwater Gulf of Mexico (see Shale Daily, Nov. 6) . Over the past year Anadarko has increased its Permian rig numbers from two to 10: six in the Wolfcamp, two each in Avalon and Bone Spring. Five rigs were added in 3Q2013 alone. The rigs now are exploring its 330,000 net acres in the Delaware; four new Wolfcamp wells had 30-day production rates that averaged 1,000-1,600 boe, 90% liquids.

“We think these are very solid wells, even if they aren’t barn burners,” said Canaccord’s Christensen. “The real story here is that the ramp-up in drilling activity in the Delaware Basin should yield many more wells this year and next…We sense some real enthusiasm for the Permian Basin, and we believe Anadarko will likely showcase more well results in the coming quarters.”

There are issues that operators will have to contend with, according to Jefferies’ Handler. The big concern is not whether there’s enough water to fracture rocks. It’s more about the water within the Permian, which makes it particularly difficult to work.

Devon Energy Corp. and Rosetta Resources Corp. management teams highlighted some of the water issues they are facing when they spoke at at the recent Jefferies conference. Rosetta entered the Permian earlier this year (see Shale Daily, March 18).

“Rosetta gave a detailed comparison of the complexities developing in the Permian, including the risks of water production, against the Eagle Ford which benefits from ‘resource density,'” Handler noted. “Costs begin to add up. Permian prices are disadvantaged to Eagle Ford, for instance, by distance and crude quality. Costs of water handling could be incremental.”

Helmerich & Payne COO John Lindsay said earlier this month the firm’s three “most active basins” were the Eagle Ford with 79 rigs, the Permian with 54 and the Bakken with 34. The newbuilds mostly are for the Permian, he added.

“Our Permian activity has improved the most during 2013, up over 80% during the past 12 months. With the newbuild commitments we have today, we could have over 60 rigs running in the Permian in the second quarter of 2014, and there appears to be additional upside from there.”

E&Ps are asking for a lot of new technology to get a better handle on what’s beneath the Permian surface, said Dawson Geophysical CEO Stephen Jumper. He discussed the growth in the basin during a fiscal 4Q2013 conference call.

“If you just take what’s going on in the Permian Basin…the type of projects that E&P companies are asking for and that our industry as a whole are providing our higher channel count surveys. We’re getting a nice full range of attributes that our clients can utilize to maybe get down, induce not just to geo-hazard mapping, but maybe they’ll do a little bit more rock property evaluation kind of stuff…

The Permian’s allure will continue to draw prospectors armed with better rigs and better technology. It is taking a lot of resources, but it’s also led to innovation among the operators.

“Not surprisingly, the Permian was expected to see the most activity growth (in absolute but likely also in percentage terms, in our view), although some of the West Texas activity was acknowledged to be sensitive to oil prices,” said Handler. “One interesting observation was that smaller customers were pooling resources to be able to participate in the larger work associated with horizontal/shale development.”