Natural gas futures strengthened for the second day in a row, this time on what forecasters said was the potential for a “material change” in the weather pattern before the new year begins. The January Nymex gas futures contract settled Wednesday at $3.815/MMBtu, up 10.7 cents day/day. February climbed 10.0 cents to $3.774. 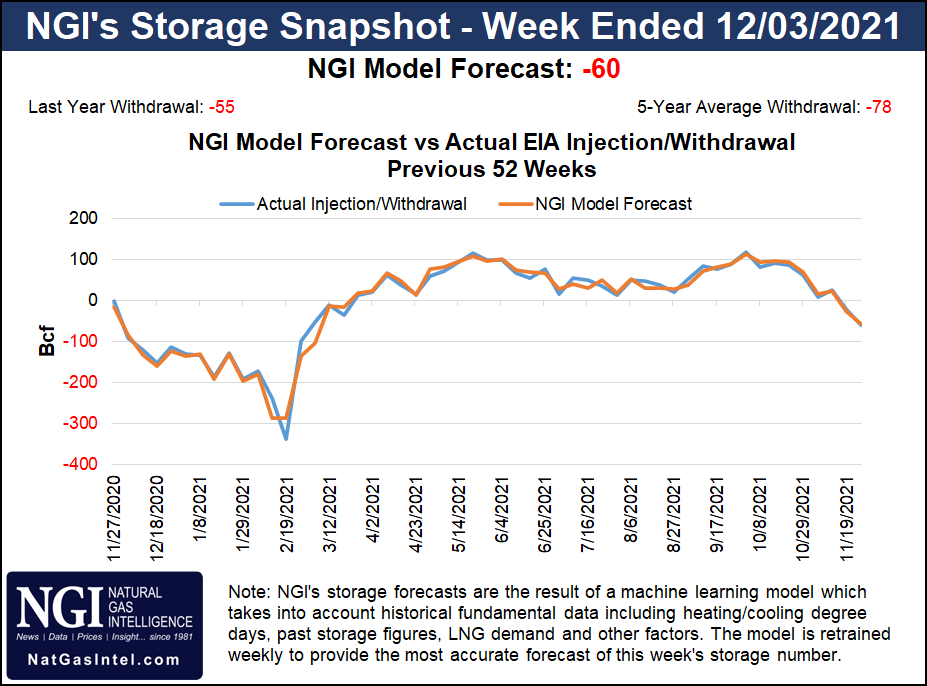 Spot gas prices also continued to rise across most of the country. However, massive losses on the East Coast sent NGI’s Spot Gas National Avg. down 36.0 cents to $4.200.

Though futures prices started the week off in positive territory, Monday’s gains were seen as more of a technical correction after the extensive sell-off in prior sessions. European gas prices also have surged this week on the arrival of the continent’s first widespread cold blast, which was seen aiding the modest increase in U.S. prices.

Tuesday’s price action was more closely linked to domestic fundamentals. Although the weather models did not add much demand to the 15-day outlook, Bespoke Weather Services said there were some bullish changes in the upper-level pattern around Dec. 20, as both the American and European weather models pushed more ridging into Alaska. This could pose more of a threat for cold air intrusions into the western and central United States during the holiday season.

“This is tied into the changes in tropical forcing we have discussed this week, and why we have talked about at least the potential for material changes in the pattern down the road,” Bespoke said. However, “we need to see consistency in the modeling and progression forward in the forecast. Also, it remains to be seen if such a change would simply take us from super warm to variable, or perhaps something more. For now, we would lean toward just some variability, nationally, with best cold chances central/west.”

NatGasWeather said the midday Global Forecast System data maintained the small increase in projected demand for later this month, but it was still “exceptionally bearish overall.” There are expected to be chilly weather systems into the West over the next 15 days, which at times may leak across the Midwest, according to the forecaster. However, with warmer-than-normal conditions over the important southern and eastern United States on most days, “national demand just won’t be nearly as strong as needed.”

How Much Will Storage Fall?

Thursday’s government inventory data may provide the next catalyst for gas prices, with analysts eyeing a string of lighter-than-normal withdrawals in the coming weeks because of the mild conditions throughout most of the country.

Ahead of the next Energy Information Administration (EIA) report, to be published at 10:30 a.m. ET Thursday, Reuters polled 16 analysts. Their estimates ranged from withdrawals of 36 Bcf to 64 Bcf, with a median pull of 53 Bcf. A Bloomberg survey of seven analysts produced a tighter range of withdrawal projections, with a median draw of 60 Bcf. NGI also modeled a 60 Bcf decrease in inventories.

Last year, the EIA recorded a 55 Bcf withdrawal from storage, while the five-year average draw is 78 Bcf.

EBW Analytics Group noted that the bearish early-December weather now is expected to plunge the longstanding storage deficit versus the five-year average into a surplus by later this month. As storage levels formally rise above five-year average levels, the argument for sizable Nymex winter risk premiums weakens even further, and additional downside price pressure is possible.

However, weather forecaster DTN’s 16- to 30-day outlook suggests a much colder pattern is possible, EBW said. This would occur as ridging near Alaska could enable cold air to descend from Canada and deliver a tremendous shift to the natural gas market, particularly in the densely populated eastern United States.

“As this cold medium-term forecast rolls forward into the one- to 15-day window — and taking into account oversold near-term technicals — a sizable rebound into the end of the year is possible,” EBW senior analyst Eli Rubin said ahead of Wednesday’s trading session. “Nonetheless, even sizable cold will almost certainly prove insufficient to fully rebuild recent Nymex risk premiums.”

The eventual turn in the weather pattern may arrive at the same time that liquefied natural gas (LNG) demand ramps up for peak winter, boosting prices at least temporarily.

EBW noted that steadily rising LNG feed gas demand is expected to continue setting records as Calcasieu Pass increases its intake volumes and the sixth production unit at Sabine Pass ramps to full capacity. Cheniere Energy Inc. has loaded its first cargo from the 5 million metric tons/year (mmty) Train 6 expansion and expects commissioning to be completed before the end of March.

The new capacity in the United States cannot come soon enough for European gas buyers, which have struggled to secure adequate supply ahead of winter. Bouts of cold temperatures and stable but weak flows from Russia to Western Europe have resulted in an accelerated drawdown of European storage by 4.5% on the week, according to Rystad Energy. That’s higher than the 4% withdrawal observed the prior week, the firm said. As a result, storage now stands at only 70% of capacity.

Europe risks a withdrawal to between 12-20% of notional capacity by April, Rystad said. This may sustain restocking demand and support Title Transfer Facility (TTF) prices into the second quarter.

“That said, cold snaps have been somewhat inconsistent, and weather expectations are now slanted towards a sporadically cold rather than a sustainedly cold winter,” Rystad senior analyst Wei Xiong said.

TTF prices corrected sharply upward after an unplanned outage at the Troll Gas field in Norway, resulting in flows dropping by around 14% on Wednesday. Rystad expects some near-term volatility until the extent of the outage is established.

“However, any lost volumes from Norway can only translate to an accelerated drawdown from Europe’s already inadequate storage,” Xiong said.

Meanwhile, prices also are strengthening in response to rising geopolitical tension along the Russia-Ukraine border. This could create additional hurdles for the Nord Stream 2 pipelines, “which the U.S. appears to view as a bargaining chip to mitigate the risk of Russian military action,” Xiong said.

“Overall, we expect the market sentiment to be skewed to bullish, with supply concerns and low storage in Europe once again at the center of gas markets’ attention worldwide,” she said. “That said, the outage duration at Troll is unknown at the moment, and we may see a price correction if flows are restored promptly.”

Spot gas prices strengthened again, but with only modest increases across most of the United States. Some stronger gains were seen in the Rockies and across California thanks to chilly weather there. However, the Northeast failed to hold onto the multi-dollar increases seen Tuesday on the approaching cold blast.

NatGasWeather said some cold weather was lingering across the Midwest and Northeast midweek for strong national demand, but warming was expected in the days ahead. Daytime temperatures were expected to return to the 50s and 60s as upper high pressure builds in, including highs near 70 degrees by Saturday in New Year City.

Upstream in Appalachia, price action was more muted. Only Texas Eastern M-3, Delivery moved more than a dime on the day, with spot gas prices tumbling $2.085 to $3.420.

Elsewhere, NatGasWeather said the southern United States would be “nice to warm” with highs of 60s to 80s for very light demand over the next several days. The Northwest is to be the Lower 48’s only “cool” region this weekend and next week. Weather systems may bring rain, snow and high temperatures in the 10s to 40s, according to the forecaster. Overnight lows could drop to the single digits.

Meanwhile, Wyoming Interstate Co. (WIC) announced a force majeure late last week at Segment 420 Threemile Lateral to Rockies Express Pipeline (REX), shutting in flows that reflected a cut of nearly 312,000 MMBtu/d. This force majeure comes as a result of an equipment failure at the Threemile compressor station, impacting the operating capacity on its Threemile Lateral to REX Segment 420.

The Threemile Lateral to REX meter held an operational capacity of 328,000 MMBtu/d and had consistently run somewhat constrained before the event, according to Wood Mackenzie. Still, the pipeline also stated that until further notice, capacity through Segment 420 would be reduced to Elapsed Pro Rata Scheduled Quantity for both forward haul and backhaul.

Since Sunday (Dec. 5), though, receipts have been trending slightly higher, according to Schulz. Timely nominations reflected 105,341 MMBtu scheduled for Wednesday, up from 35,517 MMBtu on Sunday.Even with the minor increase in gas flows, the chilly weather in the Northwest boosted spot gas prices. Opal cash jumped 44.5 cents to $4.875, and Questar popped 39.5 cents to $4.750.