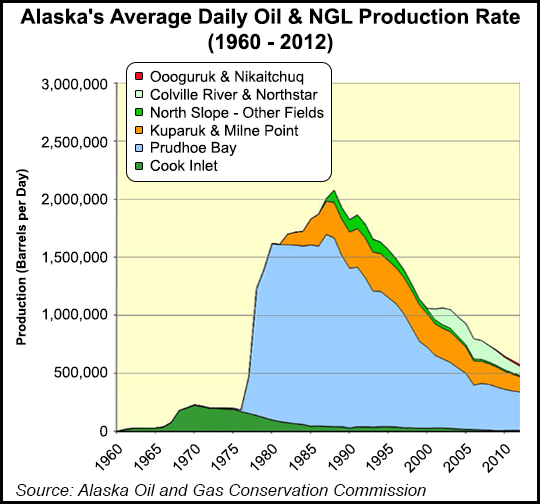 Gov. Sean Parnell praised the deal, saying it brings “another entrepreneurial company” to the North Slope. “Hilcorp has a proven record of improving production in Cook Inlet, and their new North Slope commitment shows the ‘More Alaska Production Act’ [see Daily GPI, April 16, 2013] has created the right environment to attract new companies and competition to the North Slope.

“Today’s announcement is important because it builds on BP’s previous commitments of billions of dollars in new oil investments at Prudhoe and Alaska’s legacy fields, and reflects a focus on advancing the Alaska LNG Project, and unlocking gas from Prudhoe and Point Thomson,” the governor said.

The assets included in the sale represent about 19,700 boe/d of net production for BP, less than 15% of BP’s total net production on the North Slope.

The agreement does not affect BP’s position as operator and co-owner of the Prudhoe Bay oilfield nor its other interests in Alaska. BP said it remains committed to increased investment at Prudhoe Bay, which it said is made possible by the recent oil tax reforms. Plans include adding two drilling rigs, one in 2015 and a second in 2016, for a total incremental $1 billion investment over five years.

Hilcorp is expected to become the operator of the Endicott, Northstar and Milne Point oilfields and their associated pipelines and infrastructure.

“Hilcorp takes ownership of two mature oil fields ready for new investment and activity, and it will operate a third field that is primed for accelerated production,” added BP’s Janet Weiss, president for the Alaska region. “And, the state gets another accomplished operator working the North Slope. Thanks to tax reform, Alaska is now on course for increased investment and production and even the possibility of LNG.”

It was just over two years ago that Marathon Oil Corp., an Alaska operator for more than 55 years, agreed to sell nearly all of its natural gas properties in the state for an undisclosed sum to a unit of Hilcorp (see Daily GPI, Nov. 9, 2012; April 11, 2012). This happened about nine months after Chevron Corp. agreed to sell a package of Alaska oil and gas assets in the Cook Inlet to a Hilcorp unit (see Daily GPI, July 21, 2011).

The BP sale, which is be subject to state and federal regulatory approval, is anticipated to be complete by the end of the year. Financial details of the transaction were not disclosed.