Houston-based Hilcorp Energy Co., one of the largest private operators in the country and the largest in Alaska, pulled a stunner Tuesday, agreeing to pay BP plc $5.6 billion for all of its legacy operations and interests. 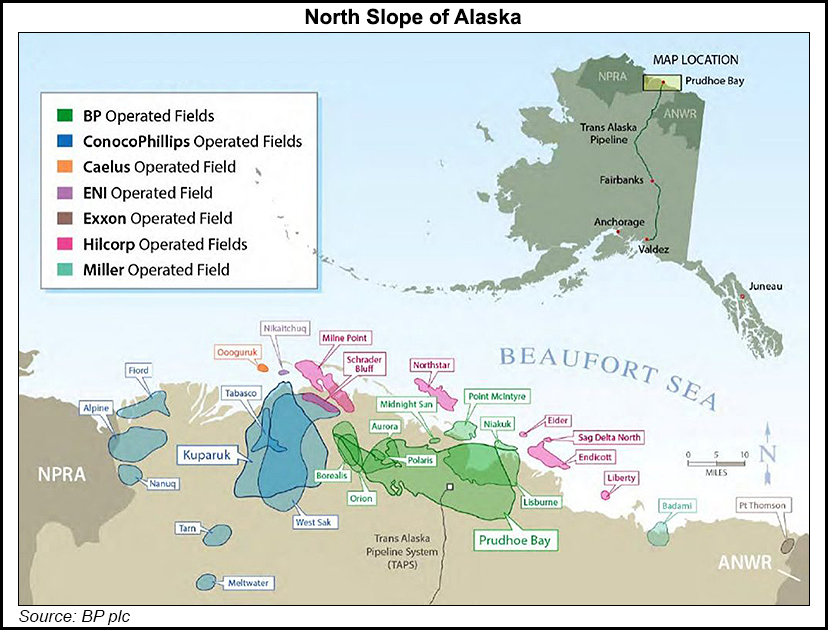 The sale to Hilcorp Alaska would include BP’s entire upstream and midstream business in the state, including BP Exploration (Alaska) Inc., which owns all of the upstream oil and gas interests, and BP Pipelines (Alaska) Inc.’s stake in the Trans Alaska Pipeline System (TAPS).

“Alaska has been instrumental in BP’s growth and success for well over half a century and our work there has helped shape the careers of many throughout the company,” Group CEO Bob Dudley said. “We are extraordinarily proud of the world-class business we have built, working alongside our partners and the State of Alaska, and the significant contributions it has made to Alaska’s economy and America’s energy security.

“However, we are steadily reshaping BP and today we have other opportunities, both in the U.S. and around the world, that are more closely aligned with our long-term strategy and more competitive for our investment.”

The deal would help BP toward a goal of casting off $10 billion in assets to advance a strategy that includes more Lower 48 opportunities.

With its extensive Alaska experience, Hilcorp “is ideally placed to take this important business on into the future, continuing to optimize its performance and maximize its value for the State of Alaska,” Dudley said. “We are committed to a safe and smooth transition of operations so that our employees, partners and local, state and federal government officials all feel that we have handed over these important assets in the right way.”

Hilcorp agreed to pay BP $4 billion initially and another $1.6 billion through an earnout thereafter. Subject to regulatory approvals, the transaction should be completed in 2020.

“Alaska has been a core part of BP for 60 years and saying goodbye will not be easy,” said BP Alaska Regional President Janet Weiss. “Our people have achieved incredible success over the decades developing and maintaining these hugely important assets, but we are confident this sale is in BP’s and the state’s best interests and the business will be best positioned for the future with Hilcorp. We will do all we can to ensure they are able to quickly build on the strong foundation that we and others have built here.”

BP began working in Alaska in 1959 and drilled the confirmation well for the Prudhoe Bay oilfield in 1968. In the mid-1970s BP helped build the 800-mile Trans Alaska Pipeline and began producing oil from Prudhoe Bay in 1977.

The giant oilfield, still considered the most prolific in U.S. history, has to date produced more than 13 billion bbl of oil and is estimated to have the potential to produce another 1 billion bbl-plus.

BP now employs about 1,600 people across its Alaska operations.

This year, BP’s net oil production from Alaska is expected to average almost 74,000 b/d. It operates Prudhoe Bay with a 26% stake, and it holds nonoperating interests in the producing Milne Point and gassy Point Thomson fields.

In addition to shares in TAPS and its operator the Alyeska Pipeline Service Co., BP is divesting midstream interests in the Milne Point Pipeline and the Point Thomson Pipeline.

Hilcorp has been operating in Alaska since 2012 and currently produces more than 75,000 boe/d gross. In 2014 it purchased BP’s interests in four operated Alaska North Slope oilfields.

During the second quarter, BP’s net U.S. oil and gas production averaged 921,000 boe/d-plus, from major interests in Alaska, the Lower 48 and deepwater Gulf of Mexico.

Late last year BPacquired a portfolio of Lower 48 assets from BHP for $10.5 billion. It also continues to develop assets in the deepwater Gulf of Mexico, bringing on a series of new projects on its major producing assets. The $9 billion Argos platform on the Mad Dog field is expected on stream in 2021.

“Our exit from Alaska does not in any way diminish BP’s commitment to America,” Dudley said. “We remain very bullish on the U.S. energy sector. In just the last three years we have invested more than $20 billion in the U.S. and we will continue to look at further investment opportunities here.”

The BP transaction marks Hilcorp’s fourth major acquisition in Alaska since 2012; today it operates interests in the Cook Inlet and on the North Slope.

“Energy is a cornerstone of the Alaskan economy, and this investment will help drive growth in local energy production, jobs and state and local revenue for many years to come,” said Hilcorp President Jason Rebrook, who is leading the transition team.

Hilcorp “has a proven track record of bringing new life to mature basins, including Alaska’s Cook Inlet and the North Slope, and we have a clear understanding that an experienced local workforce is critical to success,” he added.

With operational experience in Alaska and a workforce made up of 90% state residents, “we understand the importance of this asset to the state,” said Hilcorp CEO Greg Lalicker. “We’re excited about the opportunity ahead and are fully committed to the safe and responsible development of natural resources in such a special place. This commitment is a top priority as we work to ensure a seamless transition process.”

Hilcorp affiliate Harvest Midstream’s Alaska unit is acquiring the BP’s 49% interest in TAPS, 49% of Alyeska Service and other related midstream interests. Alyeska would continue to operate the pipeline.

“The Trans-Alaska Pipeline System is an icon of Alaska’s energy industry and a monument to Alaskan ingenuity and will power,” said Rebrook, who also is CEO of Harvest Midstream. “It’s also a critical piece of infrastructure for America’s energy future.”

TAPS “is an engineering marvel that has played a critical role in the history of the energy industry,” said Harvest Midstream President Sean Kollasa. “It will continue to play a very important role, and we look forward to being a key partner in its future with a focus on safety, the environment and the communities it connects.”