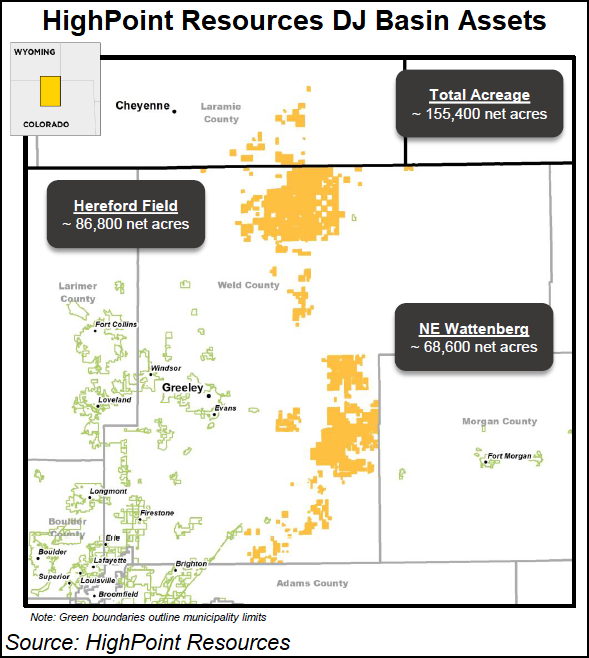 The Denver-based independent has 155,400 net acres primarily in Weld County, CO, and parts of southern Wyoming.

The company has 112 permits, enough to sustain a 1.5 rig program through the end of 2020, mostly in the Hereford field.

“It’s going to be more heavily weighted toward Hereford with the well results that we’re getting out of Hereford,” said CFO Bill Crawford, citing the higher oil cut.

HighPoint expects to produce 3.6-3.7 million boe in total during the fourth quarter under a capital expenditures outlook of $30-40 million.

The glaring weak spot in Highpoint’s earnings was the drop in revenues from natural gas liquid (NGL) sales. Despite a 9% year/year increase in NGL production, the average sales price dropped by 76% to $5.76/bl before hedging. Depressed processing yields related mostly to third-party facilities in the Hereford field, as well as basin-wide ethane rejection, impacted quarterly volumes by an estimated 100,000 boe, said Crawford.

“Ethane prices were weak and transportation and fractionation costs were high from the Rockies,” he said. “We expect NGL infrastructure and yields to improve in the fourth quarter in 2020, but expect NGL prices will remain weaker than historical levels.”