Increased industrial energy use, coupled with strong ongoing demand for liquefied natural gas (LNG) exports, could more than offset a gradual rise in production and drive U.S. natural gas prices this year well above the level at which they finished a pandemic-plagued 2020, according to industry experts. 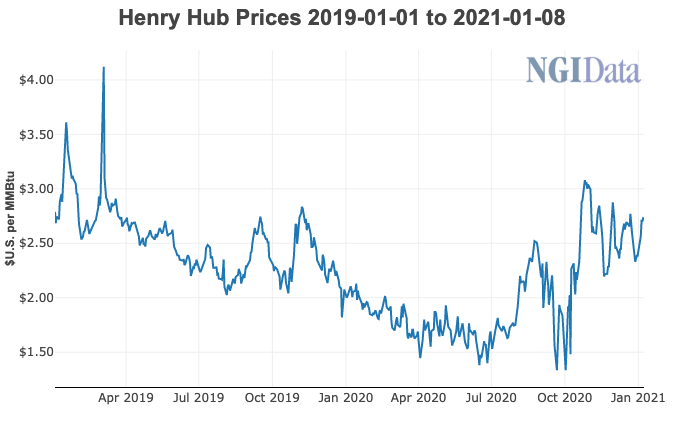 A similarly bullish outlook can be expected for Mexico, where gas prices tend to move in lockstep with U.S. benchmarks because of Mexico’s growing reliance on pipeline imports from north of the border.

Analysts at Raymond James and Associates Inc. estimated U.S. gas futures could reach $4.00/MMBtu by the end of 2021. While residential demand held up last year amid the elevated work-from-home levels imposed in response to virus outbreaks, commercial and industrial demand declined during the initial depths of the pandemic last year. The Raymond James team expects energy use from those sectors to mount as vaccines get widely distributed, the pandemic fades and economic activity picks up.

At the same time, they anticipate associated gas that is produced from oil wells to remain relatively light because of the steep oil production cuts implemented in 2020 in response to the coronavirus. Exceptionally mild weather is always a wildcard, but should overall demand outpace production, supplies would dwindle and force prices upward, the analysts reasoned.

Net exports of gas from the United States to Mexico are forecast to grow by 2.2 Bcf/d during the 2020-2030 period, according to a presentation in December by Kinder Morgan Inc., which cited Wood Mackenzie projections.

“We are convinced that current oil/gas strip pricing would drive a significant domestic supply decline and leave us dramatically short on natural gas in 2021,” the Raymond James analysts said. “In our view, the transition to a relatively normal demand environment in the coming year paired with significant domestic natural gas production declines sets up quite well” for higher prices.

Natural gas spot prices at benchmark Henry Hub averaged $2.05 in 2020, the lowest level of the past decade, according to the Energy Information Administration (EIA). “Prices started the year relatively low because mild winter weather led to less natural gas demand for space heating” and “remained low as economic effects induced by the Covid-19 pandemic reduced both natural gas production and consumption.”

The Raymond James gas price outlook is similar to one by analysts at Tudor, Pickering, Holt & Co. (TPH).

U.S. underground stockpiles should dwindle “materially” in the second and third quarters as “much stronger year/year LNG utilization pushes the market into undersupply,” the TPH analysts said. “If pricing doesn’t respond to force gas to coal switching, we expect inventories to exit the second quarter at a 6% deficit to the five-year average and widen to a 19% deficit by the end of the third quarter.”

The TPH analysts forecast a return to $3.00-plus pricing ahead of the 2021/2022 winter as the market looks to avoid entering the next heating season with storage at “precarious levels.” They highlighted the impact of Asian demand for U.S. exports in particular.

Asia posted record monthly imports in December that were up by 15% from a year earlier, the analysts said. They noted intense winter cold in northern Asia, LNG supply disruptions late last year in 11 countries driven by maintenance issues, and feed gas disruptions that have left the Asian market short on natural gas.

The TPH analysts see demand holding strong in Europe, as well, because the continent is competing with Asia for LNG imports. European storage could be depleted rapidly, “opening up an opportunity for U.S. LNG utilization to push 90%” through the second and third quarters of this year.

Gas storage in Europe “could drop below five-year average levels by mid-January and end the winter several hundred Bcf below 2020 levels, buttressing injection-season demand for U.S. LNG” and supporting prices.

On the production side, meanwhile, analysts expressed caution.

Wood Mackenzie’s 2021 outlook calls for Lower 48 natural gas production levels to hover between 89 Bcf/d and 90 Bcf/d throughout the year – near year-end 2020 levels and below pre-pandemic output.

Senior research analyst Nicole McMurrer said gas producers began starting up drilled but uncompleted wells in associated gas areas during 3Q2020 and ramped up in November after the maintenance season was completed. The November surge was concentrated in the Northeast, she said. Capacity is relatively high in the region, where Pennsylvania daily production has recently averaged around 20 Bcf/d.

In the important Permian Basin, RBN Energy analyst Jason Ferguson said production has recovered to 11.5-12.0 Bcf/d, on par with 2019. “I see us growing some this year,” he said, to around 12.5 Bcf/d by late 2021. However, Ferguson does not expect Permian output to reach 13.0 Bcf/d until next year.

National production levels hung around 90 Bcf in November and December – near six-month highs, following cuts tied to both the coronavirus and a record hurricane season that forced temporary shut-ins in the Gulf of Mexico several times over the summer and fall.

Overall, Wood Mackenzie and RBN analysts say output has recovered but it is expected to either hold stable or gradually increase over the course of this year.

U.S. exports, meanwhile, are riding a wave of momentum. The United States exported 9.4 Bcf/d of LNG in November 2020 — the most for any month on record, EIA said in a December report. EIA forecasted that exports would exceed 9.5 Bcf/d from December through February and would average 8.5 Bcf/d in 2021, a 30% increase from 2020. Export levels have topped 11 Bcf on several days over the past several weeks.

U.S. demand is expected to get a boost from greater electricity consumption, which EIA expects may rise by 1.3% in 2021. The agency expects 34% of electric power sector generation to come from natural gas.

Well completions in North America have nearly recovered to pre-pandemic levels, with hydraulic fracturing jobs reaching a 12-month high in March, according to Rystad Energy. Nowhere are completions climbing faster than in the Permian Basin, analysts said. The data is borne out by the rising rig count in West Texas and southeastern New Mexico. The…